A record 3 Huskies drafted in NFL’s first round

Danny Shelton (Cleveland), Marcus Peters (Kansas City) and Shaq Thompson (Carolina) are the first trio of Huskies selected in the first round of the same NFL draft. 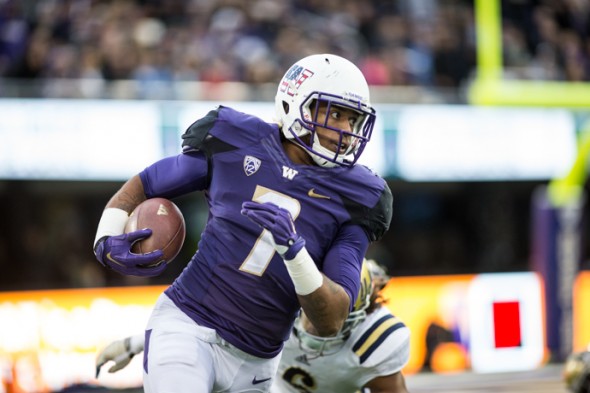 Shaq Thompson, who won the Paul Hornung Award as the nation’s most versatile college player, went to the Carolina Panthers at No. 25 overall. / Drew McKenzie, Sportspress Northwest

With linebacker/safety/running back Shaq Thompson a surprise selection by the Carolina Panthers at No. 25 overall Thursday night, the Washington Huskies had an unprecedented three players selected in the first round of the NFL draft. Thompson followed DT Danny Shelton, who went to the Cleveland Browns with the 12th overall pick, and CB Marcus Peters, taken 18th overall by the Kansas City Chiefs.

Before Thursday, the Huskies never had more than two players taken in the first round.

Since the inaugural NFL draft  in 1936, USC has had three or more players selected in the first round nine times, with a high of five in 1968 and four in 2008. Washington and Colorado (1976), which became part of the Pac-12 three years ago, are the only other schools with as many as three.

Here are the drafts in which three or more players from a current Pac-12 school were selected in the first round:

Thompson scored six touchdowns, two as a running back and four on defense (one interception return and three fumble returns). He started at tailback for Huskies at Colorado, rushing for 174 yards and a touchdown on 15 carries and had two receptions for 41 yards.

Thompson played in 40 games in his three-year career, finishing with 3.5 sacks, 15 tackles for loss, 16 passes defensed and five fumble recoveries.

Numerous mock drafts projected Shelton as a Cleveland pick, so his selection was no surprise. The question with Peters was how far he would fall in the first round after he was dismissed from the team in November following disputes with UW coaches. Most mocks had him going after the 26th pick.