Seahawks in 2nd round take Frank Clark, a DE kicked off Michigan’s team after a domestic violence episode, and in 3rd round take Kansas St. receiver/returner Tyler Lockett. 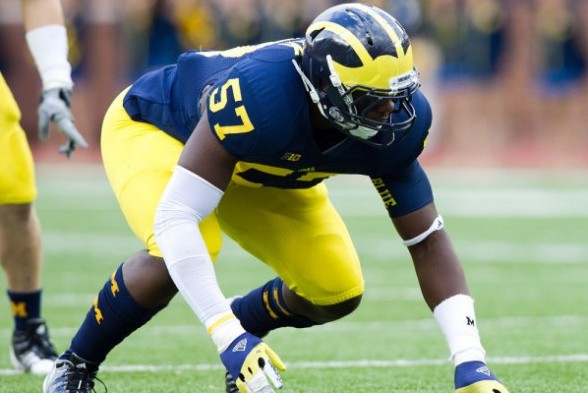 In order to select Lockett, the Seahawks, originally scheduled to select 95th overall in the third round, traded that pick, plus No. 112 (fourth round), 167 (fifth), 181 (sixth) —  to Washington in order to move up.

Described by scouts as a player with “huge upside,” Clark, 21, was dismissed from the Michigan program in November after his arrest on domestic violence charges. In addition, in 2012, Clark pleaded guilty to second-degree home invasion felony charges after stealing a laptop from a Michigan dormitory. That resulted in a one-game suspension.

After Michigan head coach Brady Hoke removed Clark from the program last fall, he said, “This is a tragic situation. Our student-athletes will be held accountable when their actions fail to meet the standard we have at Michigan.”

In the police report, Clark’s girlfriend said he punched her in the face after an altercation in the Maui Sands hotel in Sandusky, OH. The woman’s brother, who was also in the room, said Clark picked her up the neck and slammed her to the ground. Clark was outside the room when police arrived.

Clark told officers he didn’t touch the woman, saying she was having “crazy fits” and maybe pregnant. The woman reportedly did not press charges.

A native of Bakersfield, CA., Clark attended Glenville High School in Cleveland, OH., where he participated in football and track. He was a three-star recruit coming out of high school. NFL.com’s analysis:

“Downhill defensive end who can play on the other side of the line of scrimmage. Has the power to control the edge and is able to disengage and finish as a tackler. Fires out of stance with good burst upfield as pass rusher. Keeps pad level low and converts speed to power. Gets shoulders turned when he rounds corner as pass rusher, gaining leverage advantage.

“Effort rusher who relies on motor and power over talent. Lacks fluidity and natural transition from move to move as pass rusher. Doesn’t gain much ground with spin-move counter, often twisting in place. Lacks subtlety of movement or footwork necessary to execute consistent inside move at the next level. Marginal change-of-direction talent. Has had multiple off-field issues during his time at Michigan and was dismissed from Michigan in November after being arrested on domestic violence charges.”

The 5-10, 182-pound Lockett was selected second-team All-America as an all-purpose player in 2014 and first-team All-Big 12. He was also a Biletnikoff Award semifinalist (nation’s top wide receiver).

Lockett ranked third nationally in total receiving yards (1,515) and all-purpose yards per game (176.6) in 2014, and also was tops in the nation with a 19.1-yard punt return average. He finished his collegiate career by setting Alamo Bowl records with 13 catches and 249 all-purpose yards in a 40-35 loss to UCLA last January.

Lockett, who tallied 22 touchdowns the past two seasons, likely will become a slot receiver.

“Has a knack for making explosive plays as a receiver and return man. Steps up his game when matched up against top competition across from him. Likes to block . . . Very slightly built. Struggles with physical cornerbacks and can be redirected in his routes. Press coverage could be an issue for him on the next level. Scouts are concerned that he is too slightly built to be a full-time NFL kick returner.”