Thiel: Once again, Seahawks are sooo out there

DE Frank Clark has big upside, but his downside puts the Seahawks in the heart of the NFL storm concerning domestic violence. Carroll and Schneider have rolled the dice again. 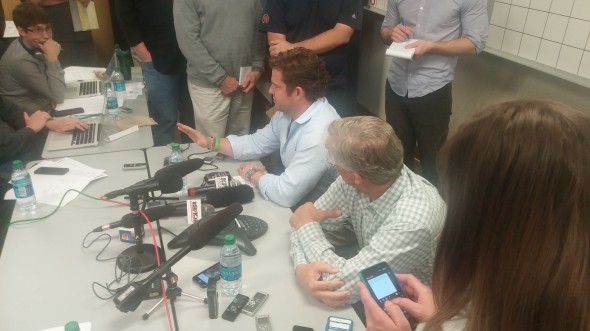 The gravity of the moment was apparent when John Schneider sat down in the media workroom Friday night at team headquarters, with Pete Carroll at his side, and read from handwritten notes. The glib Seahawks general manager reads from notes as often as Bill Belichick grins.

Nervously, Schneider explained to reporters how he and Carroll, who both previously were on the record about their disdain for players who commit domestic violence, just drafted a guy in the second round who was thrown off the University of Michigan team after an alleged episode of DV with a then-girlfriend.

After reading the written remarks that said DE Frank Clark, based on the team’s research, was worthy of the chance, Schneider dutifully began answering questions when the key one came up quickly:

“Based on information received, Clark never hit the woman?”

That brief conclusion flew in the face of a police report of an incident in November, which reporters found online within a minute or two of Clark’s selection. The Detroit Free Press’s account is here, describing an argument turned violent in a motel in Sandusky, OH., between Clark and girlfriend Diamond Hurt, with family and other witnesses.

Schneider was asked if he understood the reaction to the brutal report.

“I would understand that,” he said. “I have four older sisters.

“I would say that there’s always two sides to a story, and you have to go through the whole thing, you can’t just go with one police report. You have to talk to everybody involved —  everybody.”

It’s true that a police report is just that, a report. The report is not always accurate. The people of Baltimore recently have been addressing that issue.

In this case, the report was sufficient to file a misdemeanor domestic assault charge, and for then-Wolverines coach Brady Hoke to throw Clark off the team. To that point, he had 13.5 tackles for loss and 4.5 sacks, and, at 6-2 and 277 pounds with good speed, looked every bit a draftable player.

The place for the decision is a courtroom. On April 10, the Sandusky Municipal Court — in Ohio, not Michigan — said a plea agreement had been reached that dropped down the charge to disorderly conduct. Clark, 21, was sentenced to three days in jail with credit for time served, and fined $350. He was ordered to complete counseling and was charged $50 for probation services.

But coupled with a freshman-year burglary charge that resulted in a stolen laptop, Clark appeared to be damaged goods, given the intense scrutiny the NFL was under for its clumsy, tone-deaf actions regarding domestic violence episodes among its players. Some media speculation around the time of the February combine had Clark washing out of the draft.

As for Clark’s take, on a teleconference call, he was predictably grateful for the chance, and contrite about his baggage. He stuck to his claim that he never hit his girlfriend.

“I believe I was wrong, and I am sorry. The main reason I am, is because I put myself in a position where I shouldn’t have been. I’m not saying I did anything wrong as far as putting my hands on a woman, (but) I do apologize to everyone it may have affected. No one should have to go through that — whether you’re the person who’s looking into it, or in the middle of it, or the woman. I don’t believe a woman should ever have to go through something like that.

“I don’t believe anyone should put a hand on a woman.”

Carroll, as ever, believes his long experience in dealing with kids from broken, impoverished families — Clark grew up in Los Angeles and for a time was homeless, but eventually moved to Cleveland  — gives him some cred when dealing with behavioral risks.

“We are concerned (with how it looks); of course we are,” he said. “That’s why we had to do such a thorough job of understanding what was at hand. Every guy is an individual case. That’s why our (scouts and personnel people) did such a thorough job to decide to give this man an opportunity.

“The years of having kids who’ve had issues allows us to think we can help him be successful, by our approach and the resources. We feel very confident. We wouldn’t have done this otherwise.”

While Carroll has had many success stories, he also had one colossal flop with the Seahawks — Percy Harvin. He had no known issues with domestic violence, but he had conflicts with his coaches at the University of Florida as well as with the Minnesota Vikings.

The mercurial wide receiver cost the Seahawks large treasure to obtain him, and he did some spectacular deeds as a Seahawk. But all the things Carroll intimated about prevailing with Harvin where others could not, came crashing down in October, when the Seahawks all but fired him because he became unmanageable.

The circumstances of Harvin and Clark are different, but they are connected to Carroll because of his strong belief that he can reach just about anyone. Carroll has been right more often than he has been wrong, but mistakes with high-profile players on a high-profile team carry a certain megatonnage.

At the moment, there is no evidence that Clark’s altercation with his girlfriend was a fireable offense at Michigan, nor was it a DV conviction in court. So to suggest that Carroll and Schneider are deliberately marginalizing trouble to get one of their special athletes on the field is not justifiable — yet.

In NFL poker, Carroll and Schneider have a penchant for boldness that is breathtaking. They just shoved a whole bunch more chips on table. Again. They must be close to certain, because they first have to justify the bet to their wives and sisters.