With their first two picks Saturday, both in the fourth round, the Seahawks started to fill the voids left by the departures of C Max Unger and LG James Carpenter. 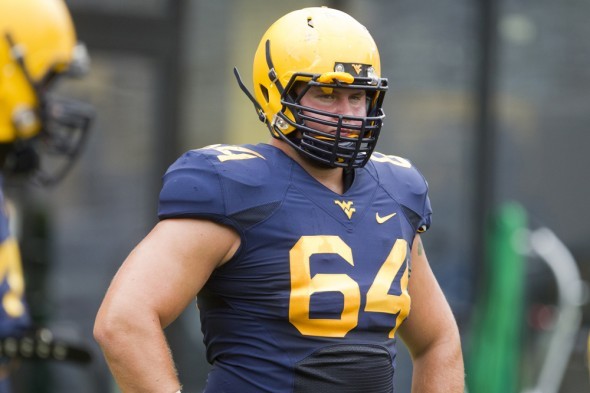 The Seahawks finally addressed the protection issue for Russell Wilson Saturday when they selected a pair of offensive linemen with the 130th and 134th overall picks. Seattle took Terry Poole, a 6-foot-5, 307-pound tackle from San Diego State with the first of its two fourth-round choices and followed with guard Mark Glowinski, a 6-4, 307-pound guard from West Virginia University.

After those choices, the Seahawks predictably went defensive with all four of their remaining draft choices, although one of their DL prospects seems destined to move to the offensive line.

The Seahawks took a hit on that unit during free agency, losing center Max Unger (trade to New Orleans for TE Jimmy Graham) and guard James Carpenter (signed with the New York Jets). O-line coach Tom Cable said the rookies will have to be versatile.

“That’s the reason we took ‘em because we’ve got a little mixing and matching to do,” Cable told reporters. “We like who’s here (current Seahawks) and this is going to give us even more flexibility. Both of the (draftees) will have some learning to do at this level, but that’s normal. I just think the fact that they can play a number of spots is going to help us.”

The Seahawks began with a player with character issues, a smallish receiver who excels in the return game, two potential offensive line starters, a potential defensive line starter, and three projects. They did not get a replacement for Unger, nor a big wide receiver target that coach Pete Carroll has coveted. Saturday’s haul:

Poole is a Bay Area guy who attended Seaside High in Seaside, CA. — Hall of Famer Warren Moon’s high school — where he also lettered in basketball. He was a Raiders fan when Cable was Oakland’s head coach.

“I’ve been watching Tom Cable since he was with the Raiders,” he said on a teleconference call. “I watched how he coached, and he is a helluva O-line coach.  I’m just ready to put on for the Seahawks, for my city.”

“In high school I was known as a nasty player, and I just kept going with it, man,” he said. “Very physical and hard-nosed, that’s what I do. When people are on the ground, I’m still going to hit ‘em.  I take pride in being the most physical player on the field.”

Round 4, pick 130: Poole made second-team All-Mountain West last season and has experience at left and right tackle. He joined the Aztecs as a junior college transfer (Monterrey Peninsula College) after the 2011 season.

NFL.com analysis: “A JUCO transfer lacking athleticism to play on the left side, Poole might get a shot at right tackle but is better suited for a move inside. With more strength and experience, Poole has a shot to make a practice squad and potentially work his way up the ladder.”

Glowinski has been a guard in college. His only snaps at center have been in practice. But the Seahawks have vacancies at both, and Glowinski claims he made a good impression on his visit to Seahawks HQ.

“They were really impressed with me,” he said on a teleconference with reporters. “I just had a gut feeling toward the end of that round, the way it was going, that they were going to pick me up. I’m excited right now.  I just can’t explain it.”

Asked what he thought of blocking for RB Marshawn Lynch, he was equally thrilled.

“I’m excited as hell — there’s no other way to put it,” he said. “I like the hard-nosed style, so I think it will be perfect for me.

“I never stop.  I like to compete.  I don’t let anything get in my head.  If one play goes bad, or anything like that, I’m just looking forward to the next play so I can get after it and compete.”

Round 4, pick 134: Glowinski made second-team All-Big 12 last season, starting all 13 games at right guard. In 2013, he started all 12 games. Glowinski moved from tackle to guard during the spring before his junior year.

NFL.com analysis: “Tackle-turned-guard who is still learning to play the position. Lack of bend will cause leverage issues, but he has enough pure upper-body strength to overcome and he has potential to be good in pass protection. The physical traits combined with the toughness and intelligence should give him a shot to become a starter at some point.”

Coming from a small school such as Towson (Maryland), and being on the smallish side (6-0, 195), Smith didn’t receive rave reviews from scouts when he came out of college. But he considers himself a physical corner with the skills to cover and tackle at the NFL level. It didn’t surprise him he was overlooked.

“I knew they would find me,” said Smith, who was in Raleigh, NC., when he found out the Seahawks had selected him. “But I knew that other teams probably would not look at me as much because I came from a small school, and the level of competition. I’m thankful the Seahawks looked past that.”

Smith admitted that Towson was the only school to offer him a scholarship. When asked what he would have done if that hadn’t happened, he didn’t hesitate.

“I probably would have been at home, working at McDonald’s, or something.”

Round 5, pick 178: A first-team All-CAA choice, Smith started all 12 games for the second consecutive season. He was a three-year starter who made 53 tackles last season with one interception and one pass breakup. Smith played in the East-West Shrine all-star game and finished his career with 312 career tackles, six interceptions, six forced fumbles and 25 passes defensed.

NFL.com analysis: “Average athletic traits with decent ball skills but a substantial deficiency in play strength. West Virginia peppered Smith with hitches to wide receiver Kevin White and Smith was unable to respond favorably. He can make it into a camp, but likely lacks enough meat on his bones to become a roster factor.”

Two years ago, as a raw wide receiver at Oregon State, Gwacham, received a telephone call from a Beavers assistant coach who wanted to know if Gwacham, (6-5, 245) would consider switching to defensive end.

“I bought in,” said Gwacham. “It hasn’t been easy, but thanks to the staff at Oregon State, they’ve helped make it less stressful on me, as well as simplifying the play book, and doing anything and everything to help me play faster.”

“They’ve said they want me to play defense and rush the quarterback, and that’s honestly what I want to do,” said Gwacham. “That’s where I feel I can excel the most.

“I’m looking to coming in with a fresh notebook to learn as much as I can as soon as I can. I want to do everything possible to help this team win, whether it’s contributing on special teams, or as a role player, or whatever.”

Round 6, pick 209: A project, Gwacham made the rare transition from wide receiver to defensive end ahead of his senior season. Gwacham registered 27 tackles as a top reserve at DE and tied for third on the team with four sacks, including two at Hawaii. He also forced a fumble at USC. Gwacham reached 7-foot-1 as a high jumper and was also a triple-jumper for the Oregon State track team. A native of Nigeria, he moved to the U.S. at age seven. Gwacham earned two letters as a wide receiver and four in track and field.

NFL.com analysis: “Explosive athlete with only one year of experience at defensive end. Gwacham lacks the functional strength to play the run and he’s still in the infant stages of learning how to rush the passer. His desire and character combined with his superb physical traits could make him a late-round project who teams show patience with as he gets bigger and continues to learn the position.”

A defensive lineman at the University of Buffalo, Sokoli (6-5, 300)  is expected to make a transition to the offensive line.

“Tom Brunner (Seahawks scout) talked to me about playing offensive guard and I was open to the opportunity,” he said.  “I came to know Tom Cable through some workouts in New Jersey, and I’m extremely excited. I can’t wait to get to work and become the best offensive lineman I can be.”

Sokoli said Seattle was the only team to view him as an offensive, rather than a defensive, lineman.

“I didn’t see any serious interest from any other team,” he said. “Every other team was basically defensive line.”

Round 6, pick 214: Sokoli played four seasons at the  Buffalo after immigrating to the United States from Albania at the age of nine. He had 95 tackles and 2.5 sacks during his career, but most analysts did not believe he would be drafted. Sokoli grew up playing soccer and hopes to become a Wall Street broker.

NFL.com analysis: “Impressive 38-inch vertical leap with 31 bench reps. Has good size and length and enough power to hold the point of attack if moved outside. Good motor and willing to pursue with consistency. Athletic frame on a natural 5­-technique forced inside into a nose spot in Buffalo. He plays with good arm extension and strength, but pass rushing is limited and will have to prove he can unlock explosiveness that his pro day unearthed.”

Murphy figured he would be drafted in the fifth or sixth round, and said he is gratified that he had an opportunity to compete for a roster spot, whether it’s in the secondary or on special teams.

“Your have guys like Richard Sherman, Kam Chancellor, Earl Thomas, who are All-Pros. Anywhere I can fit in, so if it’s special teams, I’m happy with that,” said Murphy.

Murphy played at Oregon State with Obum Gwachum, selected by the Seahawks in the sixth round.

“He’s a true competitor,” said Murphy. “Though this was his first year of playing defense, he is willing to do whatever is asked of him. Seattle has a great draft pick in Obum.”

Round 7, pick 248: An Oakland native, Murphy was three-year starter for the Beavers who finished his career with seven interceptions, two forced fumbles and a fumble recovery. He also scored a pair of touchdowns, one on an interception return, the other on a kickoff return. Last season, Murphy had 65 tackles, 6.5 tackles for loss and eight passes defensed, and was a Pac-12 honorable mention choice. Murphy played prep football at Oakland Tech,

+=Pick obtained in trade with Redskins; *=Compensatory pick obtained as a result of losing 2014 free agents.