Seahawks drafted a bunch of intriguing players, but top choice Frank Clark had a host of problems at Michigan. Pro sports teams aren’t necessarily equipped to find out everything. 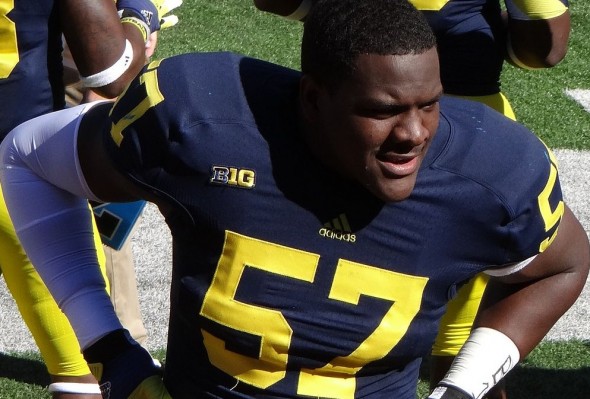 Frank Clark and the Seahawks ssid all the right things about his past and what they imagine his future to be. / Wiki Commons

Typical Seahawks draft: One guy was born in Albania. Another was born in Nigeria. One is going to play defensive end after being a wide receiver for two years at Oregon State. To get a punt/kickoff returner, usually a checkout-stand impulse buy, the Seahawks spent three draft picks to move up in the third round.

To top off the three days, among the undrafted free agents signed Sunday was a 34-year-old long snapper who is a former Green Beret. They were planning to sign Chewbacca the Wookie, but he was in the Star Wars bar with the class of 2016.

And how about safety Ryan Murphy, the seventh-round draft pick from Oregon State? Sounds like a fine Irish lad, but he wasn’t listed among the many pre-draft scouting reports. Turns out he’s a cousin of Marshawn Lynch, who went to his high school, Oakland Tech, and even lived in the lair of the Beast for awhile during high school.

Truth told, Murphy would have preferred to have been drafted by a team that didn’t have Lynch.

Guess so. Whether he has the skills to make the NFL, Murphy has the attitude — in his case, to knock the crap out of Beast Cuz.

If there is one characteristic that that can be cited from the outside of this casting call for a remake of The Dirty Dozen, it is ferocity. The Seahawks under Carroll have done a Moneyball kind of thing in pursuing undervalued talents, but for football seek a rage about being overlooked.

The idea of being selected to try to join the best team in football the past two seasons has these guys so jacked that they could re-dig the Panama Canal if they were given a shovel and a weekend.

In his post-draft presser Sunday, Carroll, speaking of Nate Boyer, the former soldier who, after three tours in Iraq and Afghanistan, enrolled at the University of Texas and became the starting long snapper, said it succinctly:

Put that one on the poster for the wall,  Twelves. That is the Prime Directive that governs personnel acquisition and has put the Seahawks in consecutive Super Bowls. Those virtues manifest themselves in different ways, from Sherman’s bombast to Russell Wilson’s Hallmark Card sentiments, but explain the emotional edge the Seahawks seek.

Beyond that, Carroll and his coaches believe they can manage the rest — be it a talent shortcoming or self-destructive behavior. The coaches are not always right (see my column from Saturday), but right often enough that they will keep taking risks no matter what outsiders say.

In a nutshell, that explains the controversial choice of Frank Clark, a talented pass rusher who was thrown off the Michigan team after being accused of beating his girlfriend.

Schneider and Carroll knew they were taking a huge risk in drafting a player who was arrested and jailed in November for domestic violence that capped a list of misdeeds at the University of Michigan.  The DV bust took place while Schneider was in Ann Arbor, MI., cross-checking the scouting report on Clark.

Regarding football, they believed he was exactly the kind of defensive end that could not only fit well the Seahawks’ scheme, but succeed Bruce Irvin/Michael Bennett/Cliff Avril once the time came.

Regarding his behavior, the Seahawks described an intense investigation of his background and personality. They were convinced, despite the police report, that Clark did not hit his former girlfriend, and that his talent was worth flying into the teeth of the public storm stirred by the NFL’s long neglect of domestic violence as a part of the pro sports culture.

“All of the elevated awareness (about domestic violence) made us more tuned in with what we needed to do to take care of business,” Carroll said Saturday. “John made his trips, we visited with the kid numerous times, we flew him in here — we have taken every opportunity and every chance to figure out what we needed to figure out.

“We did it, and we are going to hold him to a very standard of expectation. We think he is going to be very successful.”

But sometimes there are things that can’t be determined by the most well-intentioned efforts of football personnel. If they could, the New England Patriots wouldn’t have hired Aaron Hernandez, now a convicted murderer.

As Carroll himself said, they look for what’s best in athletes, not the negatives.

The Dallas Cowboys also drafted a defensive end with baggage, using the 60th pick on Nebraska’s Randy Gregory, an admitted dope-smoker foolish enough to have marijuana in his system when he was tested at the combine in February.

Sources also told the Dallas Morning News that Gregory has bipolar disorder. In his draft teleconference Friday, he was asked directly if he struggles with bipolar disorder or depression.

“Not anything like that,” he said. “I think I have the same kind of anxiety that a lot of guys in my position have. After talking with the staff, I think they were comfortable enough to be able to support me in that way. This is something that I’ve been working on for a while.”

I’m not sure I can decipher that answer. I’m also not sure pro sports teams can, either.

Pro sports teams rarely discuss mental-health problems specifically. While hiding behind privacy laws is convenient, teams can’t attempt a clinical diagnosis before a draft because no agent would allow it, and no kid would want it, even if it was affordable.

After a player is signed, a team can make mental health professionals available to counsel athletes. But that doesn’t mean the athletes will accept counseling or treatment, given the stigma in the macho world of sports, nor does it mean the professional will act in the best interests of the individual instead of the team’s interests.

In the hyper-competitive world of pro sports, neither the athlete, once hired, nor the team has incentive to know what lurks in the corners, particularly when those characteristics may contribute to what makes a football player good enough for an NFL career. And no one can forecast what the introduction of sudden wealth to an impoverished 21-year-old will bring.

Pro sports medicine can do wondrous things with a torn ACL or a separated shoulder. Pro sports mental health professionals probably can help too. But both parties gotta wanna. Tragically, the incentives in pro sports, and many other professions, for ignorance are often greater.

For the sake of Clark and the Seahawks, I hope their research is as accurate as it is sincere. But since neither they nor the player will disclose the information that led to their decision, I hope they will indulge my skepticism.