Admitting “sometimes you fall in love with guys,” GM John Schneider signed an ex-Green Beret who had three tours in Iraq and Afghanistan, as an undrafted free agent. 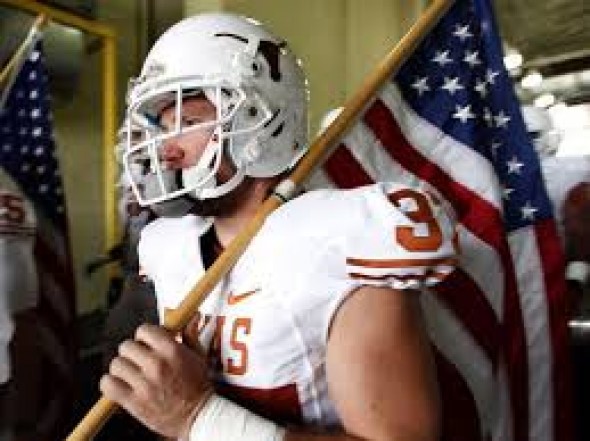 Nate Boyer is a former Green Beret who became the starting long snapper at Texas at age 32. / USA Today

As a former Green Beret, Nate Boyer knows a little bit about special teams, so the Seahawks signed him up Saturday, despite being 34. He’s from the University of Texas and a long snapper, with even longer odds.

Boyer (5-11,220), headed a list of undrafted free agents signed after the three days of the NFL draft ended Saturday. A veteran of service in Iraq and Afghanistan, he walked on to the Longhorns team at 29 despite never playing a down and became a starter.

Seahawks general manager John Schneider admits he was smitten with the story.

“You fall in love with guys,” he said, “giving people opportunities for different reasons all the way through the draft.  Through a good friend of mine, I’ve become very aware of who this guy is at his core, everything that he represents, and what he’s done every year at Texas.

“He’s just a phenomenal person. He’s a competitor, and he’s tough. He represents a lot of really, really cool things that quite frankly I think would be really good for a lot of us to be around.  And, he runs down and covers kicks, and he’s really made himself into a legitimate snapper at Texas.”

Even though the Seahawks re-signed their longtime long snapper, Clint Gresham, coach Pete Carroll is eager to see Boyer on the practice field.

“He’s going to be able to hit somebody,” Carroll said. It’s a great opportunity for us to have a guy come to the program with his background.  We cherish competitors, we cherish tough guys, we cherish guys that can overcome odds.

“I didn’t want to regret never playing, and I’d never had the opportunity,” Boyer told USA TODAY Sports. “It was always my favorite sport to watch.”

The Seahawks also signed 11 other free agents, a talent pool from which the Seahawks have often found roster-worthy talent:

Among the non-power conferences, the Mountain West led with 10. Another 41 players were selected among 18 other conferences.

By position, wide receivers led with 34 selections, including six in the first round, a draft high, followed by 30 cornerbacks.

After Jameis Winston and Marcus Mariota were taken with the first two picks, no quarterbacks were taken until the third round (Sean Mannion, Oregon State, 89th overall) and only seven overall.