Nigel Williams-Goss said he was going to transfer, and he went to the worst place possible for Huskies fans: Gonzaga. The schools renew the rivalry in 2016. See you there. 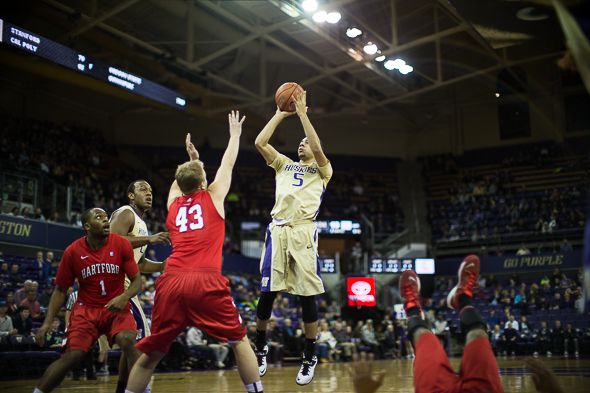 Nigel Williams-Goss will sit out next season before playing at Gonzaga. / Drew McKenzie,  Sportspress Northwest

The leading scorer for the Washington Huskies basketball team announced Sunday he is transferring to Gonzaga. Judging from the initial reaction on Twitter, more than a few Huskies fans would be glad to help Nigel Willams-Goss pack his bags to speed his defection to the Bulldogs.

And: “He now has become the Christen Laettner to all UW fans.”

The latter message referred to former Duke and NBA player Christian Laettner, a popular target of hatred from opposing fans. Speaking of which: The Huskies and Bulldogs are scheduled to meet for the first time in 10 years in 2016-17, the first season Williams-Goss would be eligible to play for the Bulldogs  after sitting out next season to satisfy NCAA transfer rules.

At least one Twitter follower dogged (Dawged?) Huskies fans for their criticism of Williams-Goss.

“Didn’t take long for the @UWhuskies fans boys to throw the kid under the bus,” the tweet read. “No class.”

Williams-Goss, who started both seasons at Washington, announced last month he would transfer. He has been vague about reasons he wanted to leave, but he admitted the Huskies’ mediocre records the past two years (barely above .500 each season) played a role. He told The Seattle Times he had a “great relationship” with Huskies coach Lorenzo Romar.

Nigel Williams-Goss can do whatever he wants and here’s hoping he succeeds. But I think people underestimate just how crazy his parents are.

Williams-Goss told ESPN.com he is joining the Bulldogs because of “their track record of winning at a high level, developing players during their redshirt year and their up-tempo offense that includes a ton of ball screens is an overall good fit for me.”

Williams-Goss made the all-conference second team in the Pac-12 this past season, when he led the Huskies with 15.6 points and 5.9 assists per game. He made third-team Academic All-America, the first player in UW basketball history to earn Academic All-America honors.

Williams-Goss considered making himself eligible for the NBA draft each of the past two seasons and theoretically could do so again after redshirting at Gonzaga next season. The Bulldogs have lost standout point guard Kevin Pangos to graduation, but freshman point guard Josh Perkins showed considerable promise before missing most of the season with a broken jaw.

Williams-Goss is the latest in a long line of players who have left the Huskies in recent years. Washington’s incoming recruiting class is rated among the nation’s best.

Williams-Goss visited Gonzaga over the weekend along with Missouri power forward Johnathan Williams. The latter led the Tigers with 11.9 points and 7.1 rebounds in 2014-15. Southern Methodist and Georgetown are among the other schools Williams is believed to still be considering.