Mariners’ AL West deficit is more like an abyss

The Mariners are eight games back in the AL West race after only 25 games. Not since 1981 has a Seattle team found itself further in arrears at the 25-game mark. 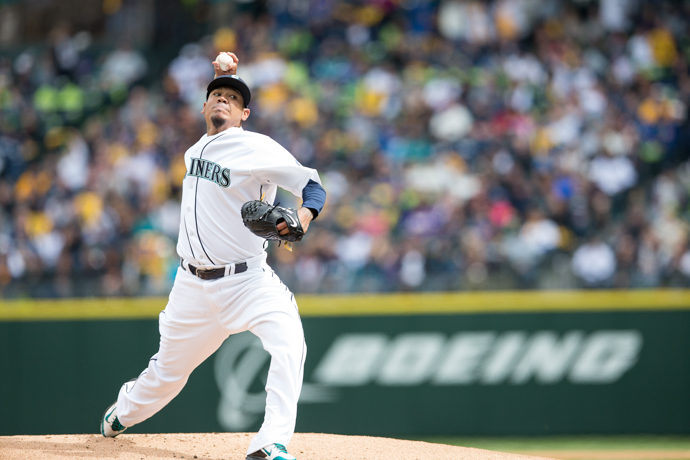 It’s difficult to tell which ranks higher on the list of sporting surprises: The Houston Astros, winners of 10 in a row, in first place in the AL West, seven games ahead of the Los Angeles Angels and 7.5 clear of Oakland, or the Mariners, broomed  — fergawdsakes — by the one-time Lastros Sunday, eight back and languishing in fourth place.

The Astros lost 92 games in 2014, 111 two years ago, 107 the year before that and 106 the season before that. They were expected to finish fifth again in the AL West and pose scant threat to the likes of the offensively beefed-up Mariners, widely considered a World Series contender, especially after the off-season acquisition of home run champ Nelson Cruz.

Three days ago, after the Mariners dropped the second of four against the Astros by allowing three home runs, manager Lloyd McClendon cautioned against panic.

“I’m not going to, after 24 (actually 23) games, say the season is burning,” he told reporters. “That’s not very responsible, and that’s certainly not the message that I’m going to send to my team. Do we need to work and do we need to get some things done? Yeah. Not blow it up, no.”

But the next night, the Mariners, despite four solo homers of their own, allowed five more home runs to the Astros and were thrashed, 11-4. Sunday, the Mariners fell behind 6-1, allowing three more long balls, before rallying for a 6-6 tie. But the Astros got them in the end, 7-6, completing the sweep.

After allowing the fewest homers in the American League in April (10), the Mariners surrendered 11 to Houston in the first three games of May.

“It was a tough game where we could have laid down, but they fought back and really grinded it out,” McClendon said after Sunday’s loss. “They showed a lot of fortitude, which leads me to believe this team is going to be just fine.”

Maybe the Mariners will be fine, but if true, it will run contrary to their own history. Consider: The Mariners are eight back in the division race after playing only 25 games. The last time a Mariner club was farther back after 25 was 1981, when a Maury Wills mis-managed team started 6-18-1 (they had a rare tie with Minnesota), a 14-game deficit. The Mariners fired Wills then and there.

Between Wills’ dismissal and 1994, only one Mariner team, Jimmy Snyder’s in 1988, fell as far back as 7.5 at the 25-game mark. Since 1995, Seattle’s first playoff year, only one other team (2013) found itself behind by as many as McClendon’s bunch is now. That team lost 91 games and sent Eric Wedge ranting into unemployment.

Of the nine teams listed, only one (1995) reached the postseason, and that required one of the biggest comebacks in major league history coupled with an epic collapse by the Angels.

Of the seven teams that fell behind by a minimum of three and a maximum of eight at the 25-game mark (excluding this year’s club) none made up more than three games in the division race over the balance of the season. Four of the seven ended up losing 90 or more, including John McLaren’s 2008 Mariners, who finished 61-101. That team was only three back after 25.

McClendon has stated repeatedly that his current club has the potential to become special, and has talked about Seattle entering a “golden age.” Maybe he’s right. But the trend doesn’t inspire optimism.

The Mariners continue their 10-game road trip with the first of three Monday night against the Angels in Anaheim. Felix Hernandez (4-0, 1.82) will contest RHP Matt Shoemaker (2-1, 6.00). Hernandez, who halted Seattle’s four-game losing streak from April 13-17 with a 12-strikeout, two-walk performance against Texas, will be seeking the first 5-0 start of his career.