Thiel: Heavy lift for Sodo arena seems too much

Seattle mayor Ed Murray’s demand for more private money for the Sodo arena is just one sign that the project may end up losing out to a new arena plan in Tukwila. 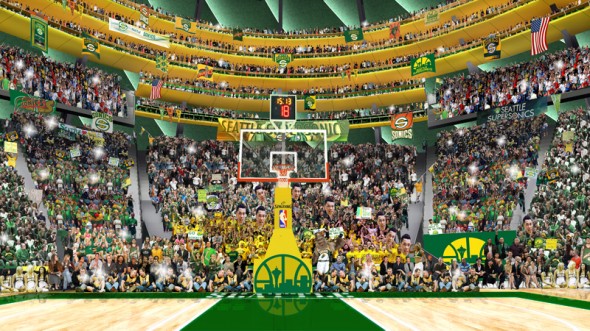 The Sodo arena plan by Chris Hansen has miles to go./ 360 Architects

If you’re a sports fan interested in the Sodo arena project and puzzled over the responses of Seattle mayor Ed Murray, you rightly ask yourself: What the hell . . .?

Happy to provide an answer. The mayor is engaged in an old game himself, a political one: Playing both sides against the middle. The middle, in this case, is arena developer Chris Hansen.

Hansen spent parts of the previous 21 months since the publication of the project’s draft environmental impact statement attempting to answer questions, explain better and improve upon the data and the investment he first supplied to get what he wanted Thursday: A figurative gold star. The final EIS said that the Sodo site was the better choice in the city than two alternative sites at Seattle Center, made so by the improvements.

The feat was properly celebrated by its advocates, and properly derided by its opponents. Weeks earlier Murray, who since succeeding arena supporter Mike McGinn was mostly non-committal, suddenly had become the biggest hockey fan since Don Cherry. In an interview with King5, Murray even played the gay card as a part of his rationale to support the project.

“I would love,” he said, “as the first gay mayor of a major city in the U.S., given the stereotypes, to be the mayor who brought home a basketball team and a hockey team.”

That has to be a municipal first: While it’s not acceptable to use sexual orientation against an elected official, it’s OK to use it for a capital construction project. Got it.

Anyway, that enthusiasm was nowhere to be found in Murray’s interview Thursday with the Seattle Times, in which he said Hansen and the supporters of an NHL-first revision to the arena plan have to come up a whole bunch more private money to get a majority of votes on the Seattle City Council.

“Folks have got to come up with a plan that’s viable for us to finalize this process,’’ Murray said. “The timeline you see for decisions on the arena are the timelines for when we either go forward, or we pull the plug.’’

Pull the plug? That’s the sort of rhetoric that comes from the unpersuaded. It also sends a signal to his allies on the council and among the electorate that his exuberant, first-gay-mayor-for-sports wasn’t, well, serious.

Yes, Murray wants to court sports fans, and yes, he wants to be loyal to the liberal, anti-corporate types who largely elected him. Sounds to me as if he’s meeting his obligations in the memorandum of understanding with Hansen, the middle man, and little more.

At the end of the Times story was buried the real tell-tale about Murray’s sentiments.

Catalyst for that bomblet of ambivalence was provided in part by NHL fan Ray Bartoszek, a Greenwich, CN., investment banker and former oil trader, married to a Seattle native, who May 1 filed plans to build an arena in Tukwila and then own an NHL expansion team.

The site that his company purchased in August, about 15 minutes south of downtown, is immediately off exit 1 of Interstate 405, east of the West Valley Highway near the Sounder train station.

Bartoszek, 50, nearly bought the NHL Phoenix Coyotes in 2013 with plans to relocate the team to Seattle before politicians in Glendale, AZ., struck a deal to keep the team.

His revived interest in the NHL in this market has one great virtue: It’s privately funded. 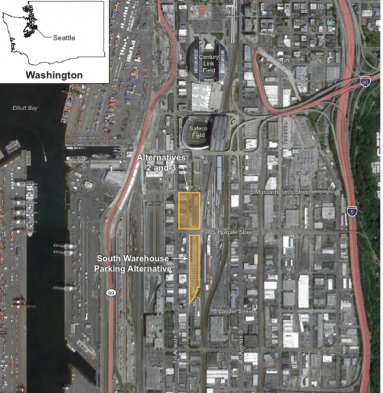 Chris Hansen purchased property south of his proposed arena for a parking garage to improve chances for environmental approval. / FEIS

Bartoszek has watched for almost three years as Hansen’s request for up to $200 million in borrowing capacity from the city and King County, as well as the opposition to the plan from its neighbors, bogged down the Sodo project. Now, Bartoszek is offering full-on competition with Hansen’s plan that would seem to have high value for the city of Tukwila, home to Southcenter Mall and a welter of one-story warehouses.

The final environmental impact statement on the Sodo arena released Thursday estimated its annual economic impact would be $230 million to $286 million, based on 186 event dates per year. That’s sounds like a lot of money, but in Seattle, it’s another medium business. In a suburb, it would be a huge deal.

King County Executive Dow Constantine, who described the county as a “junior partner” with the city in the memorandum of understanding with Hansen, would be no partner at all with the 19,500-seat “Northwest Arena,” as Bartoszek calls his plan. But his constituents would be beneficiaries.

Asked Friday in a phone interview whether the plan might set up the county as a competitor against the Sodo plan, Constantine said it’s not an issue.

“They haven’t come to us to participate,” he said. “If they move forward, we will have to understand transportation impacts, but I won’t be making any choices. That is for the city of Tukwila. The main interest is in having Sonics back and bringing hockey to King County. The addition of the Tukwila proposal increases the opportunity to make those things happen.

“Our priority is to fulfill our obligations under the MOU for the Sodo site. That doesn’t mean we wouldn’t respond to another proposal.”

Murray’s demand for more private money was non-specific, but Constantine confirmed that the reason the MOU put basketball first was because the NBA had a 40-year track record in the city. Not only has the modern NHL never been here, franchise values have been significantly less than those of the NBA.

That’s important because in order to reduce risk to a city burned by the 2008 departure of the Sonics, Hansen in 2012 pledged the franchise value as collateral against a default by the team that would precede a move.

“The difference is in the collateral,” Constantine said. “There needs to be something more provided. I don’t know what that ‘more’ is, but the arrangement was done to hold the public risk to a minimum.”

An updated MOU that would put hockey first undoubtedly would reflect two developments new since 2o12: A collective bargaining agreement with the NHL players union that favored the owners, and increased revenues from television contracts in Canada and the U.S.

Forbes estimated that the average 2014 franchise value was a record $490 million, or more than enough collateral for the $120 million public obligation for a single team in the agreement with Hansen.

But even the lessened risk is unlikely to impress the City Council, which is ultimately the decider on accepting the FEIS recommendations, agreeing to vacate a part of Occidental Avenue and issuing a Master Use Permit to build the arena.

The liberal council since has since 2012 leaned even more left and is likely to run from anything labeled corporate welfare — particularly after Hansen’s one-time partner, Steve Ballmer, bought the Los Angeles Clippers for $2 billion cash, or about four times the cost to build the entire Sodo arena.

As Council president Tim Burgess told Danny Westneat of the Seattle Times, “If we’re going to do hockey, there would have to be a substantial lowering, if not elimination, of the public investment.”

Even if the council was persuaded to rewrite the MOU for hockey and issue a Master Use Permit (forecasted by Murray to be in September at the earliest), that’s when civilian opponents such as the Port of Seattle, the Mariners and the maritime trades people would re-enter the fray with litigation based on perceived inadequacies with the FEIS.

Peter Goldman, an environmental attorney who previously represented the ILWU longshore union in objecting to the Sodo project, said there is no need for opponents to act at this time when so much needs to be accomplished by Hansen before there is an actionable event.

“We may as well sit back and let it fall of its own weight,” he said.

Pull the plug and play in the ‘burbs? As Murray said, sometimes that’s what happens.