Thiel: Carroll, Clark are joined in a leap of faith

Frank Clark made a favorable first impression Friday. But it’s all about deeds, not words, for the Seahawks’ top pick as he tries to dig out from a controversial past at Michigan. 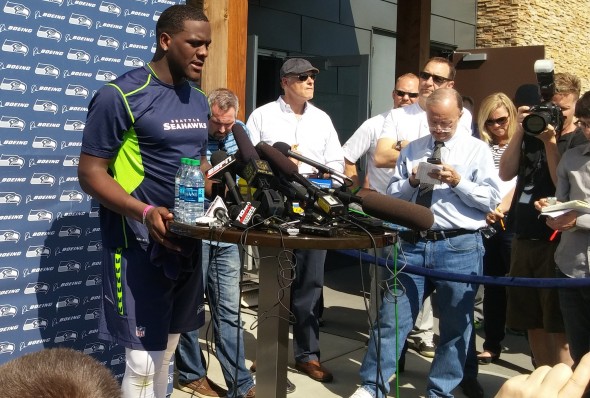 Frank Clark, man on the spot, handled himself fairly well in his first public presser as a Seahawk. / Art Thiel, Sportspress Northwest

RENTON — What specifically happened in that Ohio hotel room Nov. 15 that caused Frank Clark to end up in jail, then thrown off the Michigan football team, likely will remain conjecture. All the Seahawks’ controversial top draft choice could do Friday afternoon in his first public encounter in Seattle was explain himself as best a 21-year-old could.

“It matters,” he said, “because at the end of the day you don’t want to be labeled as what some call a woman-beater, or things of that nature. But at the same time, it doesn’t bother me because I know what I did and what I didn’t do. I don’t want to get into the specifics of the case.

“But the coaches and the staff here . . . they had the faith in drafting me and they did their job in what they did. They showed faith in me.”

From here on regarding Clark’s place with the Seahawks, faith is the coin of the realm, because the facts of his altercation with then-girlfriend Diamond Hurt that caused her injuries have been adjudicated. Observers can choose what to believe.

The Seahawks didn’t help by stumbling in their own fact-checking. That isn’t Clark’s responsibility. For more than 15 minutes, he  stood in the sun of Seattle’s warmest day of the year and  patiently tried to be earnest, sincere and humble.

He was asked what he wanted people to know about him.

“I believe I’ve got a lot of people on my team that’s helping me do that.”

Some people with long experience in dealing with spousal abuse will heave sighs and shake their world-weary heads — they’ve heard it before. Those people are certainly entitled to their eye rolls. Others will say a court has ruled, everyone deserves another chance, and Pete Carroll’s record of positive influence in young men’s lives is good. They’re entitled to the view too.

I don’t know how Clark’s selection will turn out. What I do know is that most patrol cops will tell you that among the regular calls they most dread are episodes of domestic violence. Sorting the passions and agendas in a quarreling household, usually without reliable, independent evidence, is often close to impossible.

Yet the Seahawks walked directly into the firestorm of domestic violence that has whipped up around the NFL following the Ray Rice saga — as well as many other cases that were previously ignored or marginalized — and took a guy who fell off the draft boards of some teams because of the DV charges.

While GM John Schneider said the Seahawks did “a ton of research” on Clark, none of it included three people at the hotel who responded to the altercation and found a dazed, injured woman on the floor who told police she had been punched. When reporters learned of their accounts of the scene, their stories this week made the Seahawks’ research look lame.

But after an Ohio prosecutor interviewed Clark and Hurt separately, she concluded the altercation didn’t rise to the level of domestic violence and recommended Clark be charged with disorderly conduct. But when a judge agreed to accept the misdemeanor plea April 10, that left 20 days before the draft for the Seahawks to make sure Clark’s version checked out before they all walked into the local and national storm. They didn’t.

But as Seahawks fans have come to know, Carroll is quite confident where others fear to tread.

“We kind of live in the world of optimism around here,” Carroll said Friday, smiling. “We think that something good is going to happen and we’re going to be able to take care of all situations.”

Carroll is almost defiant in his willingness to take on gang-banger wannabes and other kids on the edge from all sorts of travail in their upbringings.

“Where others might see time to turn away, we’re going to try and outlast the situation — we’re going to hang,” he said. “Keep fighting and clawing to see if we can’t come up with a solution that makes some sense to help a guy find his best.

“Sometimes they just don’t want to. They’re just not ready for it and those are very disappointing challenges to me. There have been times in the past when I thought we could reach a guy, we could find a way to communicate with him, we could bring him to his best. And we just weren’t able to do that. I always take that as a failing on my part.”

As has been written here recently, that reference would include Percy Harvin, the talented wide receiver who came at great cost to the Seahawks, at Carroll’s insistence, and tossed away at midseason, to great uproar. Carroll might say he failed Harvin, but there are people whose pathologies are beyond the reach of football coaches.

Whether he knows his limits will be a question that lingers over his Seahawks tenure. His case is bolstered by consecutive Super Bowls with a good shot at a third. His skill will be tested by the selection of Clark, whose resume includes an episode where NFL culture has been most vulnerable.

The 2015 season looked formidable enough with its requirement to mitigate the most shocking outcome in Super Bowl history via successful Pursuit of the Lost Yard. Now Carroll is asking players, coaches, 12s and the football nation who care, to have faith in him and Clark for the rest of their Seattle time together.

Karl Wallenda, you have met your match.