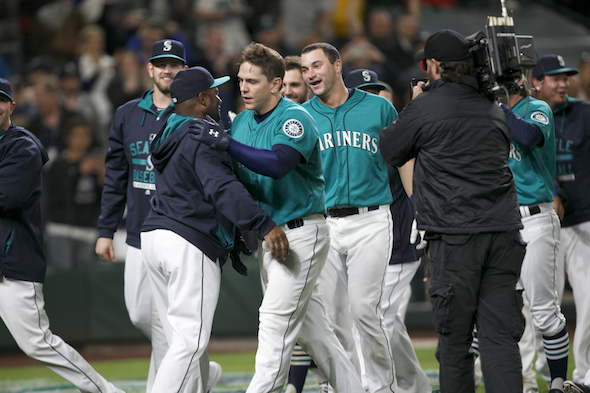 The Mariners had to stop the bleeding somehow, and a date with Oakland ace Sonny Gray didn’t look like the best bandage. But starter Taijuan Walker was good enough, Robinson Cano delivered in the clutch and Logan Morrison played the part of the hero as Seattle snapped a two-game losing streak with a 4-3 win over the A’s in 11 innings Friday night (box score). The Mariners’ second win in eight games might not have turned around the season, but it quieted the boos that began trickling out during the sixth inning.

Morrison tagged the first pitch of the bottom of the 11th into center field for a no-doubt-about-it, walk-off home run off Oakland reliever Dan Otero.

Walker was matching Gray until a Josh Reddick two-run homer in the fifth. This was one of his better starts of the season, but not being able to pitch past the fifth inning — for the fifth time in Walker’s seven starts — hurt. The bullpen turned in another solid performance to keep the Mariners in the game, but it took six relievers to finish. Those arms are going to fall off if Seattle can’t get a few more quality starts.

That the Mariners weren’t able to generate much offense against Gray on Friday night should come as little surprise; Oakland’s ace entered the game with a 3-0 record and 0.98 ERA in four career starts at Safeco Field. Things were better in the seventh, highlighted by back-to-back RBI doubles from Brad Miller and Cano to tie the score 3-3. Morrison’s solo homer provided more proof that the once-struggling first baseman is in a zone.

“If that didn’t go, I was probably just going to quit.” — Morrison on his homer

RHP Tom Wilhelmsen was back  Friday night after being activated from the 15-day disabled list. Wilhelmsen hadn’t pitched since April 10 because of a hyperextended right elbow . . . To make room for Wilhelmsen, the Mariners demoted RHP Dominic Leone, who had an 0-3 record and a 5.40 ERA in eight appearances this season . . .  3B Kyle Seager made the most impressive defensive play with an over-the-head, on-a-dead-sprint, reaching catch of a pop-up in foul territory in the third . . . Oakland starter Sonny Gray went into Friday’s game with a 4-0 record and a 1.67 ERA. His ERA in five starts against AL West competition was 0.97, and his only no-decision within the division came in an April 11 loss to the Mariners.