For Deflategate, the NFL came down hard on the Super Bowl champs: A four-game suspension for Tom Brady, loss of a first- and fourth-round draft pick, and a $1 million fine. 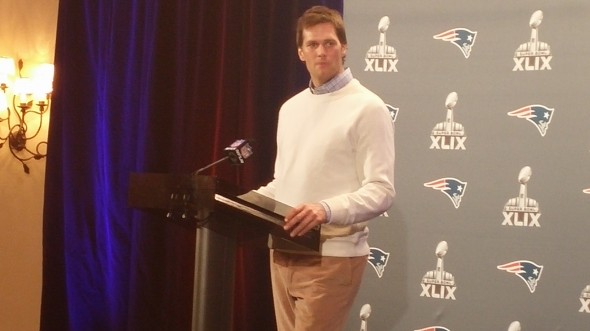 Well, this news figures to end dinners and drinks for Roger Goodell at the home of his friend/mentor/senior commissioner, Patriots owner Robert Kraft.

The NFL crushed New England, 28-24 winners over the Seahawks in the Super Bowl  XLIX, for Deflategate — a four-game suspension for QB Tom Brady, loss of a first-round pick in 2016 and a fourth-round pick in 2017 and a league-record $1 million fine.

However, no refund was mentioned for the Seahawks. Nevertheless, as the New York Post headline said five days ago when the Wells report was released: “Great Balls of Liar!”

The league statement Monday accepted the conclusion of a 243-page report prepared by attorney Ted Wells, which found that two Patriots staffers deliberately deflated footballs before the AFC Championship win over the Indianapolis Colts, and that Brady “was at least generally aware” of the violations.

Wells said it was “more probable than not” that Brady knew of plans to prepare the footballs to his liking, below the NFL-mandated minimum of 12.5 pounds per square inch.

Brady repeatedly stated that he did not know about the efforts to deflate the game balls, but Wells’ report found those claims “not plausible and contradicted by other evidence.”

Brady’s agent said last week that the report contains “significant and tragic flaws” and suggested that the NFL cooperated in a “sting operation” with the Colts, who alerted the league of their suspicions.

At the Pats’ arrival in Phoenix for the Super Bowl, Kraft, perhaps Goodell’s closest friend among owners, made a surprise appearance at a press briefing to denounce the pending NFL investigation of the then week-old scandal:

“If the Wells investigation is not able to definitively determine that our organization tampered with the air pressure on the footballs, I would expect and hope that the league would apologize to our entire team and, in particular, coach (Bill) Belichick and Tom Brady for what they have had to endure this past week.”

Instead, the NFL found reason not only to deliver the biggest fine in NFL history, but strip the club of draft picks and take away the defending Super Bowl champion’s key player for the first four games of the regular season.

The problem for the NFL wasn’t the trifling matter of actually altering the balls in a game won by the Patriots 45-7; it was violation of “the integrity of the game” by cheating. Brady did himself no favors during the investigation by not turning over his cell phone to investigators. They had no subpeona power and offered protections for his private information, but he refused.

Brady’s agent Don Yee said he will fill an appeal for Brady within the league’s required three days.

Brady will miss the season’s showcase kickoff game Sept. 10 against Pittsburgh, Week 2 at Buffalo, a home game against Jacksonville and a game at Dallas. He will return the week the Patriots face the Colts, the snitches who busted him, in Indianapolis.