From Spokane to Pullman to Cheney to Atlanta

Spokane’s Jake Rodgers overcame a position switch, a transfer from Washington State to Eastern Washington and family tragedy before making it to the NFL. 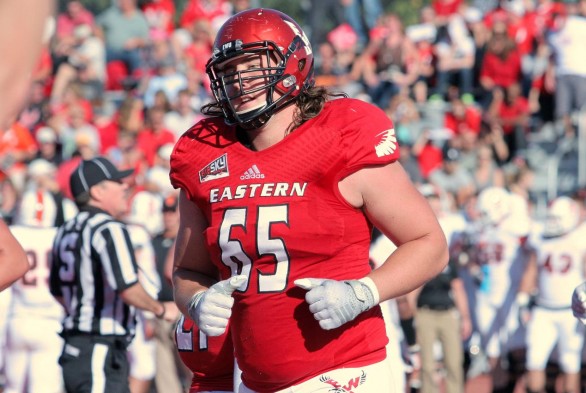 Former Eastern Washington RT Jake Rodgers, a seventh-round pick by the Falcons in the NFL draft, took a circuitous path to the pros. / Goeags.com

Jake Rodgers went through one summer football workout at Washington State University before the position switch that changed his life.

It was 2010, just before his freshman year in Pullman. Rodgers, a Spokane native, spent the first session running routes. At 6-6 and 245 pounds, he fit the mold of a traditional pass-catching, defensive-back pancaking tight end. It was a role for which WSU coaches supposedly coveted him.

The next day, a member of the equipment staff walked onto the field and announced a group of players that needed to be fitted for knee braces — the bulky metal supports worn by offensive linemen.

The first name was shouted: “Rodgers!”

“The look on his face was just pure defeat,” remembered teammate Blair Bomber. “Then it’s all of a sudden, ‘I got to put on how much weight?'”

Rodgers, now at 6-6, 315 pounds, waited at his Spokane home with friends and family. After an FCS All-America season as a right tackle for Eastern Washington, he knew there was a chance he could be a late-round selection. But the only teams in contact said they might sign him as a free agent. By the early stage of the seventh round, Rodgers had no reason to think he’d be chosen.

“I was pretty upset,” he said this week over the phone. “I wasn’t going to get drafted. I was a little disappointed, little down.”

When the Atlanta Falcons went on the clock, Rodgers took a call from a team rep. It wasn’t long before Falcons GM Thomas Dimitroff got on the phone and informed him of their selection. “You ever been to Atlanta before?” Dimitroff said.

It came as a shock because Rodgers barely had contact with the NFC South team in the days leading up to the draft. They took him with the 225th overall pick.

“Chris Morgan, (Falcons) offensive line coach, had called my position coach at (Eastern) the day before,” Rodgers said. “He called me the morning of.  So Friday morning was all I had talked to him.”

“If you would have told me, out of any of our friends our freshman year, that Jake was going to be one of the guys drafted from out of that class,” Bomber said, “I don’t think a single guy would have believed you.”

Bomber and Rodgers met before their freshman years at WSU and became quick friends. An undersized, speedy wide receiver, Bomber watched Rodgers pack on the needed 60 pounds while both redshirted under former WSU coach Paul Wulff.

It was proving just as hard for Rodgers to switch positions.

“I paid my dues getting my ass kicked,” he said. “That will humble you a little bit.”

As a redshirt freshman, he earned some playing time on special teams and started one game at right tackle against Utah. The following year, he started 12 games, playing every line position except center.

That was Mike Leach’s tumultuous first year in Pullman, when the Cougars finished 3-9. Many players recruited by Wulff clashed with Leach’s disciplinarian style.

Rodgers, a Shadle Park High School product, was no longer having fun. So he transferred closer to home, to Cheney and FCS power Eastern Washington. Bomber, his current roommate, did the same.

Rodgers was limited to 10 games in 2013 because of a knee injury, but shined in EWU’s 49-46 season-opening win over No. 25 Oregon State. As a senior this past fall, he held his own against Washington’s stout front seven, as the Eagles nearly upended UW Sept. 6 in a wild, 59-52 loss at Husky Stadium.

That was when Rodgers felt it clicked. It also gave NFL scouts evidence that he can compete against the FBS level. The physical tools were always there. During a 3-on-3 basketball tournament at WSU, Rodgers drove the baseline and dunked so hard he nearly collapsed a hoop in Bohler Athletic Complex.

The NFL no longer seemed like a pipe dream.

Rodgers’ senior season rolled along, with the 11-2 Eagles meeting Illinois St. Dec. 13 in a playoff game at Roos Field.

During the waning moments, with Eastern losing, Rodgers’ father, John, collapsed in the stands. He had a heart attack. The game was delayed while paramedics performed CPR before Rodgers was rushed to Sacred Heart Medical Center.

John Rodgers died a few weeks later in the hospital. He was 54.

“It’s been hard,” Jake Rodgers said. “It’s not something I try to think about a lot. I try to stay busy.”

That hasn’t been hard. Rodgers spent last weekend at Falcons rookie mini-camp, learning Atlanta’s zone-blocking principles. He caught the eye of first-year Falcons coach Dan Quinn, the former Seahawks defensive coordinator. Rodgers said he thought he would play guard in the NFL, but the Falcons want him at tackle.

“He is from an offense that is really a good pass protection team, they throw it like crazy,” said Quinn. “He’s long and we can’t wait to get started with him.”

Rodgers recently signed a four-year, $2.3 million rookie contract that included a $71,000 signing bonus. So he likely has some time to see how he figures into the Falcons’ plans.

Before reporting to camp, he’ll spend the next couple of months training in Spokane. Memories of his dad, an ironworker who was “at every game he could be,” won’t be far from his mind.

“He’d probably be over-the-moon proud,” he said. “He’d probably cry his eyes out every time he’d try to tell me how proud he was.”