Joe Buck and Greg Norman will broadcast the U.S. Open for Fox from Chambers Bay for 32 hours over four days — almost as hard as the course will be for the players. 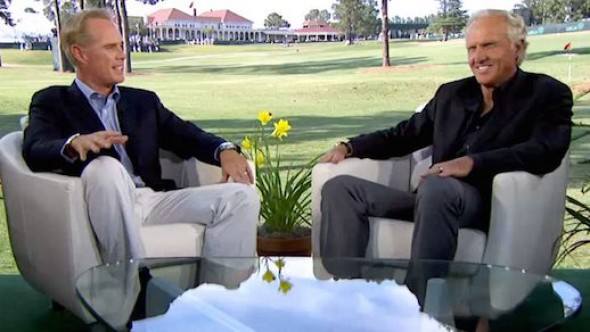 Fox’s TV’s Joe Buck and Greg Norman will have a major test as well at Chambers Bay during the U.S. Open. / Fox TV

“People can complain about how guys react down there,” he said. “But to me, you’re in their world, their field.”

The remark was not about Chambers Bay and the seemingly inevitable crankiness from the world’s elite golfers over the unusual course for the U.S. Open. Buck was answering a question about Richard Sherman’s famous rant after the 2013 NFC Championship in which the Seahawks beat the 49ers 23-17.

Buck was the Fox TV play-by-play voice when Sherman startled sideline reporter Erin Andrews by going off about the 49ers’ Michael Crabtree: “Don’t you open your mouth about the best, or I’ll shut it for you real quick!”

Fearing profanity/madness, Fox abruptly cut away from Sherman and Andrews.

“I kinda heard our producer say, ‘Get it back to Joe,’ and that cut off the interview,” Buck said. “Personally, I don’t think he would have said anything profane. He’s too smart for that.”

Buck is well-trained in the perils of live sports TV. He can only hope the golfers testing Chambers Bay are as smart as Sherman, because they may well be just as irritated after the mounds, swoops, hardpan and verticality of Chambers Bay get done disrespecting them.

Buck and his color analyst, many-time world No. 1 golfer Greg Norman, will be tested as well. The network’s debut in major pro golf will go for eight hours live in each of the tourney’s four days for what some call the Super Bowl of golf.

“I’ve never been a part of an event on TV that’s this long of an effort,” Buck said. “Thirty-two hours of live TV . . . I’m sure I’ll make mistakes and have great moments, and hope that the moments outweigh the mistakes. Live is live, don’t get to take anything back.

“I’m smart enough to know how hard this game is, how different doing an event like this is – taking bits of information from 300 acres – funneling into one telecast. It’s completely different.”

Buck’s description is similar to what Norman said about the eight-year-old course atop an extinct sand and gravel mine along Tacoma’s western shoreline. They were at Chambers Bay recently to record segments for the June 18-21 tourney.

Norman played the course with longtime PGA fellow tourist Brad Faxon. The Great White Shark was quick to hit the klaxon for the 156-man field.

“I think some players will come here and be negatively vocal,” said Norman, whose two wins in majors were on links courses in the British Open rota. “Then some will be positive. It’s how you embrace it.

“Nothing like it in the world . . . fine fescue grasses, the sand underneath, the sound of the ball hitting the green, dropping your putter on the putting surface . . . the massive scale of it — really wide fairways, massive green complexes, the undulations within the greens.”

Norman described the golfer who is least likely to end the day with a rant.

“What these guys have seen are links courses in true traditional fashion. They’ve never played a links course with this much elevation change. Big difference.”

Norman, who made $15 million in earnings from a competitive career that went from 1977 to 2009, is still in good shape at 60. But he texted two words of warning to friends on the tour about Chambers Bay.

“Get fit,” he said. “When you get a hilly course when you’re walking down a lot, some players might get shin splints.”

“It’s going to take more than two rounds to understand this course,” he said. “Some players will have never played on fine fescue, and here, it’s wall to wall. Some of these holes, you won’t know where the front of the green is. You wonder, can I mark my ball or not mark my ball?

“It’s something new and different.”

Rookie ball for all. Sorta.

“I’d be an idiot to not — not be concerned or apprehensive, but there will be things I’m hit with that I’m not expecting, Buck said. “This isn’t second nature, but it will be. Gotta start somewhere.

“My approach is to take my time and not try to wow everybody with everything I say. Silence speaks volumes, and you pick your spots.”

He has zero concern about working with Norman, whose Aussie charm wraps around a directness that should be entertaining for viewers.

“Chemistry came quick,” Buck said. “Greg is a lot like guys I’ve worked with before. I’ve been fortunate to be paired with Hall of Famers Troy Aikman and Tim McCarver. Now Greg. There’s a common work ethic among those guys. You see why they were  successful as players, and they’ve become successful as broadcasters.

“For as new as I am to golf, he’s new to broadcasting. He’ll defer to me until he feels comfortable, and I’ll defer to him after that, when he’s ready to fly on his own.”

Norman is jacked for the event because the landscape hard against the sea, with Olympic National Park for a backdrop, will compete well with the dramas of the day.

“This is made for TV — fantastic, from our perspective,” he said. “It will be such a dramatic visual. Then there’s going to be so many dramatic shots. You might have guys on six who make eagles and others make eight — on a hole 290 yards long.

“When (players) get in, they’ll spend six hours walking around here. It’s going to be taxing on the brain. Negative thoughts creep in: ‘I don’t like this, I don’t like that’ . . . they won’t figure it out.”

That will make for some good story-telling because of tension and potential frustration.

“I think it will be high because they haven’t seen the course,” Buck said. “It’s not like Oakmont (the suburban Pittsburgh course that hosts in 2016), where everyone has played, and you know what you’re going to get.”

In fact, no one knows what they’re going to get — golfers, broadcasters, galleries, groundskeepers, the national/international audiences who will see from drone-mounted cameras and hear from microphones in the bottoms of holes. The only thing for sure is we’ll see it late, with daylight until 10 p.m.

Rant away, gentlemen. If you need help, Richard Sherman is not far.