Earl Averill Jr., son of the namesake baseball Hall of Famer, died Wednesday night in a Tacoma hospital at age 84. He spent seven seasons in the major leagues. 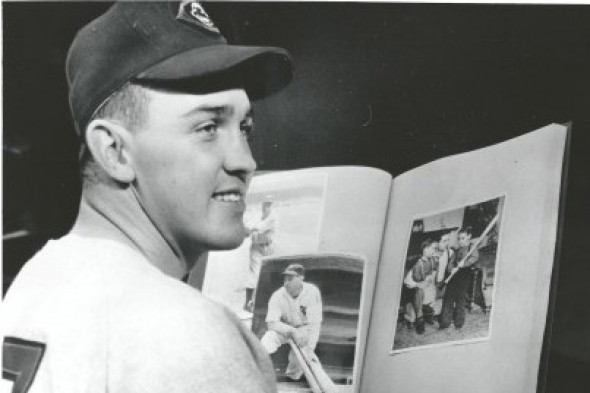 Earl Averill Jr., who made his major league debut with Cleveland in 1956, looks over a scrapbook containing photographs of his famous father. / David Eskenazi Collection

Earl Averill Jr., whose father is enshrined in the Baseball Hall of Fame and who had a lengthy major league career of his own, died Wednesday night at St. Joseph’s Hospital in Tacoma at 84. Averill was a catcher for the Chicago Cubs, Chicago White Sox, Los Angeles Angels, Philadelphia Phillies and Cleveland Indians from 1956-63.

No cause of death has been disclosed, nor have any funeral arrangements been announced. The Mariners plan a moment of silence Thursday night prior to their game with the Boston Red Sox at Safeco Field.

Born Sept. 9, 1931 in Cleveland, where Earl Sr. — “The Earl of Snohomish” — starred for the Indians from 1929-39 prior to his election to the Hall of Fame in 1975, Averill attended the University of Oregon, becoming the school’s first baseball All-America in 1953.

He made his major league debut April 19, 1956 for the Indians. Averill had his best year in 1961 with the Angels. In 115 games, he had a .266 batting average and 21 home runs. The following year, Averill set an MLB record that he shares with Piggy Ward. He had the most consecutive plate appearances reaching a base with 17, which he did from June 3-10, 1962.

Averill also played for the 1964-65 Seattle Rainiers near the end of his career.