Jesse Williams was regaining health after missing two seasons with knee injuries, but was dealt a blow with news that the native Australian requires surgery after a cancer diagnosis. 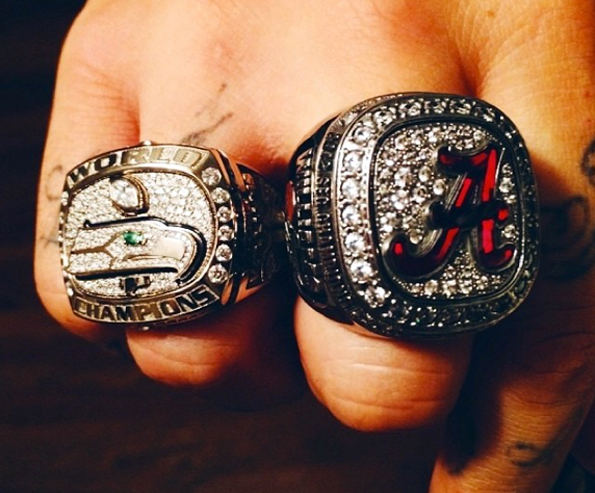 A man with a rare handful of jewelry — Jesse Williams earned a BCS national championship ring at Alabama and a Super Bowl ring with the Seahawks. / Seahawks.com

Defensive tackle Jesse Williams, an Australian selected by the Seahawks with the first of three fifth-round choices in the 2013 NFL draft, will undergo kidney surgery after being diagnosed with papillary type 2 cancer. The 6-foot-3, 325-pound Williams, who won’t play in 2015, spent the 2013 and 2014 seasons on injured reserve with knee injuries. The date of his surgery has not been announced.

“Although disappointing, I am a fighter and will handle this,” Williams, 24, said in a statement. “I am going to focus on my health and fighting this battle with a return to football as my ultimate goal. Thank you for your thoughts and support. Go Hawks!”

“Jesse is an extraordinarily tough individual who has overcome a great deal in his life and we will support him in any way possible,” said Seahawks HM John Schneider. “He is in our thoughts and prayers.”

A native of Brisbane, Williams began his American football career at Arizona Western College. He then played two years at the University of Alabama before the Seahawks selected him 137th overall in 2013.

Here is additional information on papillary type 2 cancer from cancer.net.

The Seahawks Monday waived injured RB Demitrius Bronson. former Kentwood High School star, and signed WR Deshon Foxx, who participated in Seattle’s recent rookie mini-camp on a tryout basis. Foxx started 23 of 38 games for the University of Connecticut and recorded 73 career receptions for 918 yards and three TDs, in addition to rushing 40 times for 277 yards and a 68-yard TD run. The Seahawks signed Bronson, a University of Washington recruit who transferred to Eastern Washington, as a rookie free agent June 16, 2014. He spent the majority of 2014 on Seattle’s practice squad before being signed to a futures contract Feb. 4.