Mariners: Major Mendozas with runners on base

The Mariners (17-20) have capable pitching, but if they don’t improve their hitting with runners in scoring position, they will miss the postseason for the 14th consecutive season. 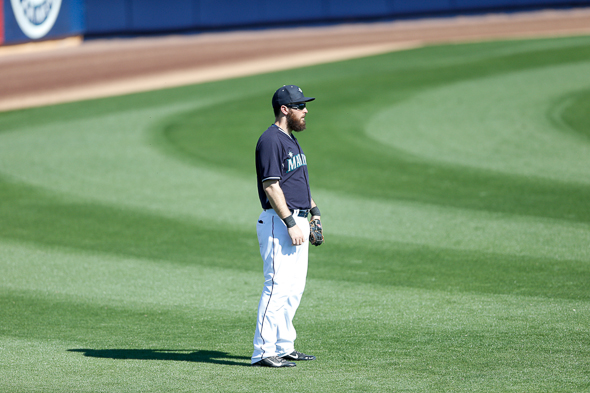 Dustin Ackley, off to his traditional slow start, is batting .048 with runners in scoring position. / Wiki Commons

To hear Lloyd McClendon talk about it, the Mariners emerged from their nine-game home stand with an array of positives: a 6-3 record despite a Felix Hernandez loss Saturday, his first of the year; AL Player of the Week Brad Miller’s home run spree (five in his past four games); and James Paxton’s 20-inning scoreless streak, giving him consecutive victories following a horrendous start (5.08 ERA as late as May 5).

“That’s the one thing that’s got lost in all this,” McClendon told reporters Sunday. “We haven’t played well to this point. But it seems like when we lose, the world is coming to an end. But the fact is, we were 6-3 on this home stand. That’s a pretty good home stand and it’s certainly something to build on. Hopefully, we’ll take that momentum on the road with us.”

Obscured, and rendered moot, by Paxton’s splendid pitching and another Miller home run in Sunday’s 5-0 series-ender against the Boston Red Sox was the fact that the Mariners once again flailed and failed when presented with scoring opportunities.

They finished 1-for-7 with RISP and now rank 27th among 30 MLB teams in that category. Among American League clubs, the Mariners rank 13th, ahead of only bottom feeders Texas and Boston.

Last year, McClendon’s first, the Mariners took their playoff chase to the final day of the regular season, batting .262 with RISP, 41 points higher than this season. Without newcomer Nelson Cruz, hitting .341 with 16 RBIs with RISP, the Mariners this season are little more than Mendoza hitters when confronted with scoring chances.

In none of those 10 95-plus loss seasons did the Mariners finish with an RISP batting average lower than the one they have now — .221. This is brutal and, if it continues, will keep the Mariners from their first postseason appearance since 2001:

It’s almost impossible to conjure a scenario in which a team with Hernandez and Cruz finishes with 95+ losses, particularly given McClendon’s persistent belief in his “golden age” club, plus the starting pitching that emerging behind Hernandez.

J.A. Happ is 3-1, 2.98 and has pitched into the seventh inning in five of seven starts. Taijuan Walker is 1-4, 7.22, but has allowed only five earned runs over his last two. And Roenis Elias has permitted three earned runs in his past 13.1 innings.

But hitting, or lack of, has been a season-long issue, especially with runners in scoring position.

As the quarter pole nears, the Mariners are 13th in the AL in runs scored, 12th in hits, 11th in batting average and 14th in on-base percentage. Robinson Cano is a major reason behind those deflated numbers. A career .308 hitter, Cano is batting .253 with a .647 OPS and ranks fourth in the league in outs made. Miller has out-homered him 5-1.

With runners in scoring position, Cano is a sub-Mendoza .194 with one extra base hit and 10 whiffs.

The Mariners Tuesday enter a nine-game road trip through Baltimore, Toronto and Tampa Bay at 17-20 and 7.5 games behind Houston in the AL West.  Unless the Mariners significantly improve their hitting, no amount of effective pitching will get them to the postseason, making RISP the key stat to watch throughout the trip, and beyond.