Tyler Johnson, 24, a little guy from Spokane’s Central Valley, is a big man in the NHL, where the undrafted center is the leading scorer in the playoffs. 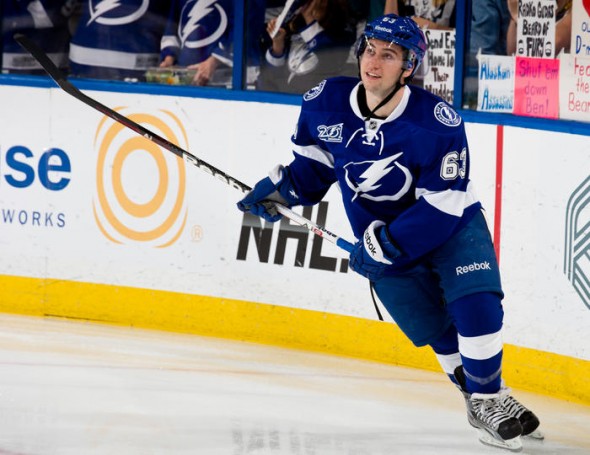 Few National Hockey League players were born and raised in the Pacific Northwest, but the hottest hockey player in the world hails from the hockey hotbed (NOT!) of Liberty Lake, a Spokane suburb. Tyler Johnson took over the lead in NHL playoff scoring Monday night when he recorded a hat trick in Tampa Bay’s 6-2 victory over the New York Rangers.

“The bigger the game, the better he plays. That’s Tyler Johnson,” Lightning coach Jon Cooper said. “It’s unreal to watch. He put the team on his back, and we all followed.”

After 15 playoff games, Johnson leads the NHL with 16 points, 11 goals and four game-winning goals.  He scored Tampa Bay’s first three goals at fabled Madison Square Garden Monday, scoring at even strength, shorthanded and on the power play. It was the first playoff hat trick in Lightning history.

“I’m living my dream,” said Johnson, who graduated with honors from Central Valley High School in Spokane Valley. “That’s what’s driving me to try to the best I can and play for my family. They sacrificed so much for me to be here.”

Johnson, 24, went undrafted despite an outstanding four-year junior career with the Spokane Chiefs in the Western Hockey League. The speedy little (5-foot-8, 183 pounds) center scored 24 goals and 50 points in 82 games last season, when he was a finalist for NHL rookie of the year. This season, Johnson tied for 14th in scoring with 72 points (including 29 goals) in 77 games.

Johnson, who was profiled in the Inlander  in 2010 in his fourth and final season with the Chiefs, is only the second NHL player to grow up primarily in the Spokane area. Scott Levins, another Central Valley product, played in 124 NHL games in the 1990s.