After all the fury and bluster by Robert Kraft, the owner of the New England Patriots claimed to be serving the greater NFL good Tueaday when said he would not appeal penalties. 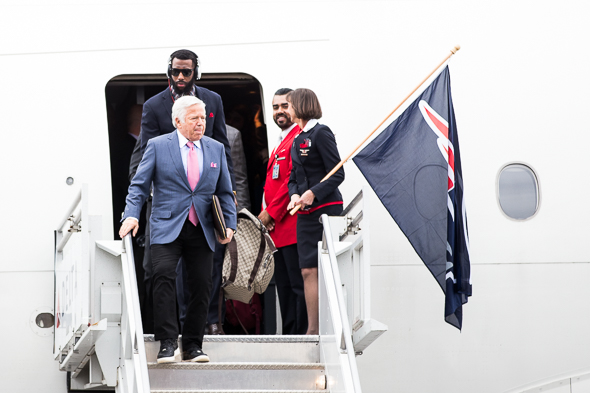 Arriving at the Super Bowl, Pats owner Robert Kraft was full of angry rhetoric. Tuesday, he backed off his threats to fight the NFL’s verdict against the Patriots. / Drew McKenzie, Sportspress Northwest

After all of his Big, Bad Wolf bluster about blowing the NFL house down, the owner of the New England Patriots, who beat the Seahawks 28-24 in the Super Bowl, has accepted the penalties imposed by the NFL based on the Wells report on Deflategate.

Speaking to reporters Tuesday at the NFL meetings in San Francisco, Kraft read a statement that took the high road, closing at least part of the story that was a massive embarrassment to the NFL. The champions were caught cheating, and even though the misdeed involved seemed trivial to many, the rules violation appeared valid, and the continuing national sports conversation made it worse.

The Patriots added to the fire last week when a team attorney issued a 20,000-word rebuttal to the report prepared by independent investigator Ted Wells. Among the challenges was a contention that the references to deflation in texts between the two suspected manipulators of the footballs were actually about weight loss by one of them.

The less-than-regulation footballs were discovered in the AFC Championship by Colts players, who lost to the Pats 45-7. The controversy boiled into Super Bowl week in Phoenix, where Kraft demanded an apology from the NFL once his team was vindicated.

That will not be happening.

Continuing, however, will be QB Tom Brady’s appeal of his four-game suspension for his role in the ball-deflation scheme. It is independent of the Pats’ rumored threats to sue the league over the loss of draft choices and the $1 million fine. Backed by the players union, Brady apparently will continue to argue that his involvement was not proven by the Wells report.

The text of Kraft’s statement:

“It’s been an emotionally charged couple of weeks as all of you know, and I’ve been considering what my options are. And throughout this whole process there have been two polarizing audiences. At one end of the spectrum we’ve had Patriots fans throughout the country who have been so supportive and really inspirational to us and believing in us. But, also mindful, at the other end of the spectrum, there are fans who feel just the opposite. And what I’ve learned is the ongoing rhetoric continues to galvanize both camps. And I don’t see that changing, and they will never agree.

“But the one thing that we all can agree upon is the entire process has taken way too long. And I don’t think anyone can believe that after four months of the AFC Championship Game, we are still talking about air pressure and the PSI in footballs. I think I made it clear when the report came out that I didn’t think it was fair. There was no hard evidence, and everything was circumstantial. And at the same time, when the discipline came out, I felt it was way over the top. It was unreasonable and unprecedented, in my opinion.

“So I have two options: I can try to end it, or extend it. And I have given a lot of thought to both options. The first thing that came to mind is 21 years ago, I had the privilege of going to a meeting similar to what we have here, in Orlando, and being welcomed in an NFL owners’ meeting. So here’s a fan and a former season ticket holder, living a dream and being welcomed in that room. And I got goosebumps that day. And I vowed at that time that I would do everything I could do to make the New England Patriots an elite team, and hopefully respected throughout the country and at the same time, do what I could do to help the NFL become the most popular sport in America.

“You know, what I’ve learned over the last two decades is that the heart and soul and strength of the NFL is a partnership of 32 teams. And what’s become very clear over those very two decades is at no time should the agenda of one team outweigh the collective good of the full 32. So I have a way of looking at problems that are very strong in my mind, and before I make a final decision, I measure nine times and I cut once. And I think maybe if I had made the decision last week it would be different than it is today.

“But believing in the strength of the partnership, and the 32 teams — we have concentrated the power of adjudication of problems in the office of the commissioner. And although I might disagree with what is decided, I do have respect for the commissioner and believe that he’s doing what he perceives to be in the best interests of the full 32. So in that spirit, I don’t want to continue the rhetoric that’s gone on for the last four months. I’m going to accept, reluctantly, what he has given to us, and not continue this dialogue and rhetoric. And we won’t appeal.

“Now, I know that a lot of Patriot fans are going to be disappointed in that decision. But I hope they trust my judgment and know that I really feel at this point in time that taking this off the agenda, this is the best thing for the New England Patriots, our fans and the NFL. And I hope you all can respect that.

“You know, I would normally take questions, but my desire is truly not to continue the rhetoric, and so I’m going to leave this discussion exactly here. Thank you very much.”