Ackley’s replacement not at Mariners’ Triple-A

As the Mariners’ top draftee in 2009 continues to nose-dive, calls for his departure grow. But there isn’t an outfielder in Triple-A Tacoma ready to take his left field position in Seattle. 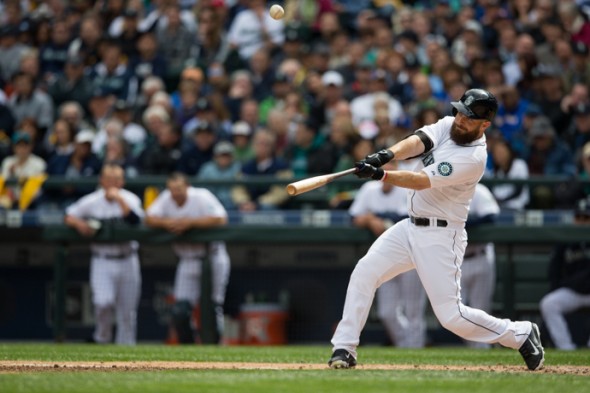 Dustin Ackley isn’t getting it done at the plate for the Mariners, who will  run out of roster room when Austin Jackson returns. / Drew McKenzie, Sportspress Northwest

Dustin Ackley’s time in Seattle is probably running out.

Calls for the Mariners to part ways with the left fielder, by either trade or outright release, gained momentum Tuesday when Seattle Times columnist Larry Stone wrote that “For Ackley’s own good, and the Mariners’, it sure looks like a change of scenery would be beneficial.”

The laboring No. 2 overall pick from the 2009 MLB draft began Wednesday with three home runs, seven RBIs and a .186 batting average in 34 games. More troubling: He is 1-for-23 (.043) with runners in scoring position.

Yet he was back in the lineup, hitting eighth and playing center field Tuesday as the Mariners opened a three-game series against the Baltimore Orioles at Camden Yards. He went 0-for-2 with a walk and a hit-by-pitch in Seattle’s 9-4 loss.

Clamors to designate Ackley for assignment will continue until he starts to hit. Hint: Wait until summer. Some want him to be traded. But if general manager Jack Zduriencik tries to do it now, his value would be at an all-time low.

The Mariners (17-21) are scrambling to find his replacement.

Displaced SS Brad Miller made his first career start in left field this past week, but he seems more likely to assume a super utility role — designated hitter, shortstop, left field — if Chris Taylor finally starts to hit after being recalled in early May to replace him.

At a glance, no outfielder at Triple-A Tacoma ready to replace Ackley permanently in left field, where he could return when rehabbing CF Austin Jackson (sprained right ankle) is activated from the 15-day disabled list. Complicating matters: When Jackson returns, the Mariners will have to return Taylor to the minor leagues or designate for assignment one among Willie Bloomquist, Rickie Weeks, Justin Ruggiano or Ackley to clear room on the roster.

Among the potential callups, Stefen Romero arguably has been the Rainiers’ best hitter, posting a .286 batting average, eight home runs, 26 RBIs and an .887 OPS in 35 games. But in his 2014 stint with the Mariners, he played left field four times. Plus, he hit .192 with three home runs and 11 RBIs in 72 games. With Nelson Cruz getting a majority of starts in right field instead of designated hitter, Romero doesn’t have a clear roster spot unless he converts to left field full-time.

That can be hard. Just ask Weeks.

What about James Jones?

He was a revelation a year ago after being inserted in the lineup following a May promotion from Triple-A Tacoma. But he eventually slumped drastically to finish with a .250 batting average and a .589 OPS in 108 games. Yes, he had 27 stolen bases and got a taste of playing left field, but the converted pitcher’s defense was a liability despite his speed. And he provides no power.

Jones didn’t make the 25-man roster out of spring training. And he’s yet to get going.  In 26 games with the Rainiers, he is batting .228 with a .555 OPS. There’s plenty of time for him to turn his season around. Just not in Seattle.

That leaves Franklin Gutierrez. The club’s former starting center fielder has a .976 OPS and .312 batting average in 23 games with the Rainiers after numerous health problems limited him to 173 games from 2011-13 and wiped out his 2014 season.

Gutierrez, 32, recently missed 11 games with a sore hamstring, so it would be unrealistic for him to assume a full-time role with the Mariners.

Seth Smith started there Tuesday and looked more than comfortable. In the first inning, he hit a solo homer, then, in the bottom of the frame, robbed former Mariner Adam Jones of a home run by making a leaping catch at the wall.

If the Mariners part with Ackley, Smith is a no-brainer. He’s played 371 games in left, more than any other position, during his productive nine-year career.

And he’s shown no signs of slowing in 2015. A Smith-Jackson-Cruz outfield would at least be respectable offensively.

That would be an upgrade.