Thiel: How would Wilson play in contract year?

New deal given QB Ryan Tannehill in Miami adds to financial pressure on Seahawks, who could let Russell Wilson play out his original deal. But how would he play with the risk? 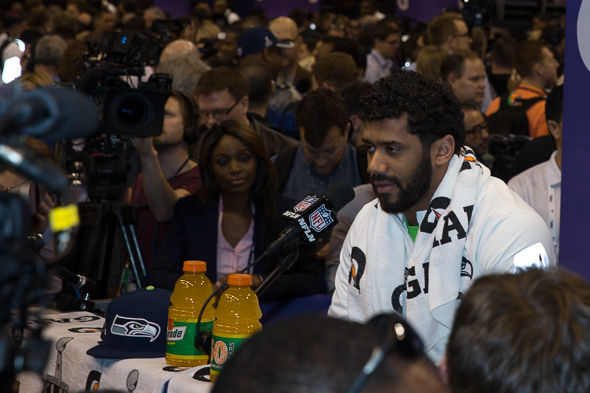 It is said that the NFL is a 12-month sport. When you’re around the league’s marquee team, scrutiny is even more intense, because everything becomes larger than it appears. So let’s try to catch up on several developments worthy of light.

Ryan Whatthehell contract extension: After the new deal Monday for Dolphins quarterback Ryan Tannehill, which included $77 million in new money and $45 million guaranteed, one could almost hear the what-the-hell?! exclamations emanating from the VMAC offices.

In fact, Tannehill’s agent, Pat Dye, was said to have taken a phone call from Schneider in which he sarcastically saluted him on the deal that will cost the Seahawks:

Media reports have put the Seahawks’ original offer in the Russell Wilson negotiations at comparable numbers: About $80 million over four years. But Wilson is a more accomplished QB individually and team-wise.

ESPN’s  2014 Total QBR ratings had Wilson 12th and Tannehill 14th, but Wilson has been to three playoffs and two Super Bowls, while Tannehill has been to zero and zero.

While neither side is talking publicly, negotiations seem stalemated. Wilson is under contract for 2015 for $1.6 million, so he will play in Seattle regardless. And the club could use the franchise tag after 2015 to keep Wilson — at a very high price.

The intrigue is if the sides agree to let Wilson play out his contract in 2015, will Wilson play his game differently?

Wilson has been remarkably smart about self-protection through three years, but in rejecting the Seahawks offer, he would be assuming the risk of a career-damaging injury. Wilson on a running play may find himself where he’s never been — having to decide between getting a hard yard for a first down, and preserving his health.

Teammate Richard Sherman describes such choices many players have to make as “a business decision.” When players are young — and the Seahawks have always shaped their roster toward youth over experience — it’s easier to pretend invulnerability; by the time a second contract is at hand, reality settles in.

Can’t imagine the Seahawks or Wilson will ever discuss publicly that aspect of human nature. But the Seahawks need to factor in the potential for Wilson becoming bashful about some contact if the decision is made to table the negotiations for a year.

There’s still time — custom in the NFL (not a rule) is to try to conclude extension talks by the start of training camp at the end of July. But Tannehill laid a lick on Schneider that made a new deal a little harder, and perhaps made Wilson’s 2015 season a little harder to play.

Two-point utopia: No team can be happier than the Seahawks about the NFL vote to change the rules on points after touchdown than the Seahawks. The addition of TE Jimmy Graham to Wilson and RB Marshawn Lynch gives Seattle more reliable short-yardage players than any other team.

Historically, the two-point conversion works about 48 percent of the time, while the one-point PAT kick from the new distance of 33 yards has an accuracy rate of about 95 percent, meaning the points per try is about a wash over a season.

Carroll has always been a risk-taker, as many will attest after Seattle’s final offensive play in the Super Bowl. But as I have said after hearing Carroll’s explanation, it wasn’t the decision to pass that was confounding; it was the type of pass and the player to whom it was thrown where the errors occurred.

The trade for Graham just became a little better, thanks to NFL owners fixing with a rules changes a problem that wasn’t a problem.

The Golden Ticket: It’s awarded to DE Michael Bennett, who took time from his fruitless campaign for an upgraded contract to drop a new comparison for Carroll — Willy Wonka, the cinematic eccentric played Gene Wilder in 1971 and Johnny Depp in 2005 in The Chocolate Factory.

During a phone interview with Portland radio station 750 AM this week, Bennett said, “It’s like playing for Willy Wonka . . . He’s crazy. He wants to be young.  He just is one of those guys who’s always upbeat, wants to have a good time, and let’s you be yourself.”

Willy Wonka. Perfect. Playing this September in The Shoutalot Factory.