An agent’s look at Seahawks talks with Wilson

Former sports agent Joel Corry, via CBSSports.com, offers a deeper look into the Seahawks’ negotiations with QB Russell Wilson in comparison to the market. 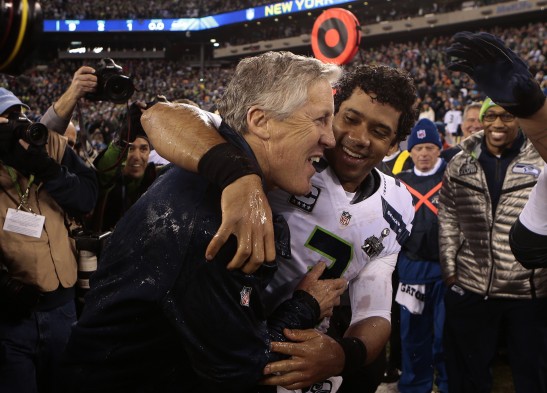 Pete Carroll and Russell Wilson have had more fun together than lately.  / Corky Trewin, Seahawks

Joel Corry is a former sports agent whose observations about NFL contracts and negotiations have become a valuable resource for media outlets. For CBSSports.com this week, he analyzed how the NFL’s seven biggest contract disputes might play out.

Below are Corry’s comprehensive thoughts on the slow negotiations between the team and its star QB, whom Corry calls the biggest bargain in the NFL:

Wilson and the Seahawks are reportedly at an impasse in contract negotiations. According to anonymous sources, the Seahawks have offered Wilson in the neighborhood of $80 million over four years.

Wilson can make a case that he should be the highest-paid player in football, where his new deal eclipses the extensions signed by Aaron Rodgers and Ben Roethlisberger. Rodgers, who signed his extension with the Green Bay Packers in 2013, averages $22 million in yearly salary. Roethlisberger recently received a four-year, $87.4 million extension from the Pittsburgh Steelers that includes $64 million in contract guarantees.

Being in the best quarterback discussion isn’t a prerequisite for becoming the NFL’s highest-paid player. Wilson has just as many Super Bowl victories with better statistics and more accolades than Joe Flacco and Eli Manning had when their big deals made them, at the time, the league’s highest-paid player.

Flacco signed a six-year, $120.6 million contract, including $51 million in guarantees, after capping off a stellar postseason in 2012, his contract year, by being named Super Bowl XLVII MVP. Nobody was considering Flacco as an elite quarterback at the time. Eli Manning was arguably a top-10 quarterback when the New York Giants gave him a six-year, $97.5 million contract extension in 2009.

Contract structure could be as big of an issue as the overall compensation for Wilson. Seattle contracts typically are structured where the guaranteed money consists of base salary guarantees and a signing bonus. Approximately 30 percent of the guarantees are signing bonus with the team’s best players on long-term deals. Base salary guarantees after the first contract year are for injury only initially at signing in most instances, but become fully guaranteed five days after the start of the waiver period in each specific year. The waiver period always begins the day after the Super Bowl.

It may be necessary for the Seahawks to make structural concessions so Wilson is treated like quarterbacks with lucrative contracts. $40 million to $45 million is fully guaranteed at signing in top quarterback deals. These dynamics make Wilson playing out the final year of his four-year rookie contract for $1.542 million a distinct possibility. Wilson is the NFL’s biggest bargain. He has made a little under $2.2 million in his three NFL seasons.

Under the exclusive franchise tag, a player will receive a one year offer from his team that is the greater of the average of the top five salaries at his position once the restricted free agent signing period of the current year has ended (April 24 for 2015) or 120 percent of his prior year’s salary.

The exclusive franchise tag currently projects to $25.18 million in 2016 but will decrease if any of the quarterbacks with the five highest 2016 salaries are released or rework contracts to lower salary cap numbers before the 2016 franchise tag designation period ends (March 2 this year).

Based on the projected number, a second franchise tag for Wilson in 2017 would be $30.216 million, a 20 percent increase over his 2016 franchise number. A third franchise tag with a 44 percent increase over the 2017 figure would be unrealistic. The average of franchising Wilson twice exclusively, especially if he has another good season in 2015, could be used as justification for a long-term deal in excess of $25 million per year next offseason.

The Seahawks don’t have to worry about Wilson holding out. A year of service towards free agency isn’t earned when a player doesn’t report to his team at least 30 days prior to NFL’s first regular season game (Aug. 11 reporting date this year). Missing this deadline and playing out his rookie deal would make Wilson a restricted free agent in 2016. The Seahawks would likely give him a restricted free agent tender where they would get a first-round pick, which will be between $3.522 million and $3.689 million next year, from a team signing him to an offer sheet that isn’t matched. Getting the year of service isn’t a concern for holdouts with four or more years of service. These players already have enough service time to qualify for unrestricted free agency.

Joel Corry is a former sports agent who helped found Premier Sports & Entertainment, a sports management firm that represents professional athletes and coaches. Before his tenure at Premier, Joel worked for Management Plus Enterprises, which represented Shaquille O’Neal, Hakeem Olajuwon and Ronnie Lott.