The release of the Official World Golf Rankings Monday yielded no big surprises: Puyallup’s Ryan Moore, ranked No. 34, will play in the U.S. Open. 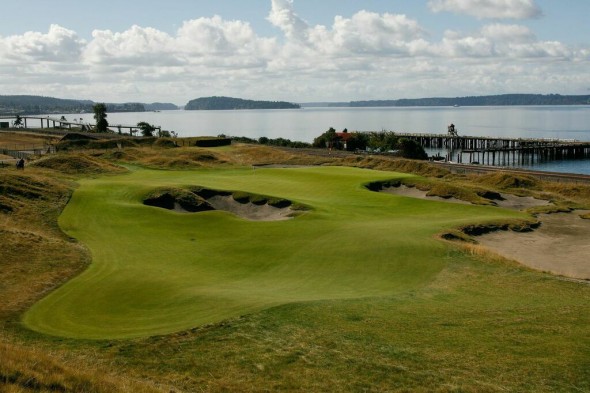 As a Puyallup native, Ryan Moore has played a number of rounds at Chambers Bay golf course in University Place.

He’ll get to play at least few more — albeit in one of the biggest tournaments of the year — when the links course hosts the 2015 U.S. Open June 18-21. Monday, Moore officially gained exemption into the U.S. Open when the Official World Golf Rankings were released.

Moore, a four-time winner on the PGA Tour, was among 24 golfers that earned exemption into the major Monday.

A few big names made critical jumps in the standings with high finishes this past weekend.

Always colorful Miguel Angel Jimenez, 51, of Spain tied for second on the European Tour’s BMW PGA Championship to jump 25 spots to No. 44 in the official rankings. Italy’s Francesco Molinari finished in a tie for fifth to move up to No. 58.

Moving down was former World No. 1 Luke Donald, who finished tied for 38th at the BMW PGA Championship to slip to 65th in the rankings. Byeong-Hun An of South Korea won the event to jump 78 spots to No. 54. As the tournament winner, he had an automatic bid regardless of ranking.

Golfers can still qualify for the U.S. Open if they break the top 60 when the World Golf Rankings are released June 15.

The international sectional qualifiers were also held Sunday, with five playing in Japan making it and 11 others joining the expected 156-player U.S. Open field after qualifying in England.

The U.S. version of the sectional qualifiers are set for June 8. There are 10 courses hosting, including Tumble Creek Club in Cle Elum.

Here’s the list of the 74 golfers exempt for the U.S. Open, not including the 16 international sectional qualifiers.