No laments detectable. The Seahawks in their first practice Since XLIX were amped. But Wilson was a no-show to attend the funeral of someone close to new TE Jimmy Graham. 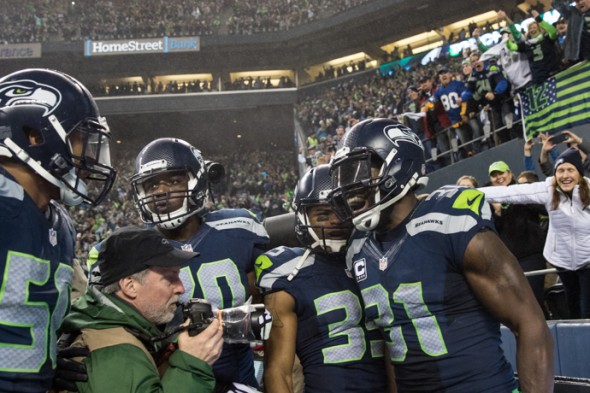 Kam Chancellor (31) liked the edge he was feeling from his teammates Tuesday. ./ Drew McKenzie, Sportspress Northwest

For the first time since the final moments of agony in the Super Bowl, the Seahawks re-gathered on a football field Tuesday. No missing organs. No slash scars on the wrists. No notes from psychologists on depression medication.

As far as could be seen, anyway. In fact, one witness claimed the opposite conditions.

“It feels like this off-season, everybody worked their hardest,” said SS Kam Chancellor, the viceroy of pain in the Legion of Boom. “I’ve seen guys out here busting their tails the whole off-season, going fast-tempo. Guys are lifting like crazy.

“It’s just like the mindset is just sharpened. We’re more focused, more driven. We’re just hungry for the first game of the year.”

Who the “we” were at the first organized team activity of the off-season was not precisely clear, since there were notable absences for the voluntary exercises.

Chief among them was QB Russell Wilson, who joined newcomer TE Jimmy Graham at the Florida funeral of Tamara Fox Meyerson, described as a friend, mentor, manager and surrogate mother to Graham.

The gesture by Wilson was to be followed by a similar one for veteran DE Cliff Avril, whose father died.

Wilson’s support of teammates outside of football seemed to speak well of his leadership, according to coach Pete Carroll.

“I think there is something to that,” he said following the padless practice. “I think it’s compassion, showing heart . . . I think (Wilson and Graham) have made an effort. They realize the value of the relationship, that them creating conversation and dialogue can be so helpful as we go.”

So Wilson’s absence had nothing to do with his negotiations for a contract extension, one of the most-watched events of the NFL off-season (aside from cheating scandals with altered footballs).

“Hopefully we’ll get something done,” Carroll said. “But if we don’t, we’ll just have to deal with that. But we’re very close — in talking. We are very close in our conversation. Our communication has been great.

“What’s been going on for months is simply an ongoing work in progress; the two sides are closer than has been portrayed.”

Asked Tuesday the likelihood of getting Wilson’s deal done before training camp July 31, Carroll said, “I don’t know. I’m not talking about that right now.”

But he was in quick agreement with Chancellor’s observation.

“I feel it too,” he said. “I felt it right since the first days that the guys came back. Each year we challenge ourselves to put together the best off-season we can. It starts with the individual and then the guys bring that to their position groups and then to the team. We’ve had no exception to that. We’ve had great work and the attitude has been on it.

“That’s all we could ask for. It’s exactly the kind of tempo we anticipate seeing if we’re on it.”

Besides Wilson, Graham and Avril, also missing were DE Michael Bennett and OLB Bruce Irvin, for lesser reasons. Bennett has made clear he wants his contract improved, and Irvin made clear his desire to play for Atlanta after 2015.

Also absent was RB Marshawn Lynch. Because he’s Marshawn Lynch. Since the OTAs are voluntary, he doesn’t have to say he was here just so he won’t get fined. He just wasn’t here.

But roll call did include CB Richard Sherman as well as Chancellor. Both were potential candidates for off-season surgery, but Sherman’s elbow and Chancellor’s MCL tear, incurred in practice the Friday before the Super Bowl, were allowed to heal without cutting. Chancellor said it was the best he’s felt after five NFL off-seasons.

Here are some of Carroll’s assessments after the first day:

On newcomer veteran CB Cary Williams: “Cary’s doing everything. He looks very much the part of the kind of player that we anticipated on his first day against somebody today. He gets it, he’s smart, he’s really dedicated, he hasn’t missed a trick. He’s been on everything. He’s assuming the responsibility of trying to take over that position on a defense that he seems to be proud to be part of, too.”

On FS Earl Thomas’s return from surgery to repair a separated shoulder:  “Earl is to get ready for (training camp July 31). We have three and a half weeks here before we’re done. He looks great. They’re really fired up about his return and the rehab work. It looks like it should be no problem.”

On DT Brandon Mebane returning from surgery to repair a torn hamstring: “Brandon is doing great. He’s running all over the place. I don’t see why he can’t make it back for camp. The trainers have been thrilled about his work regimen. I think he’s having the best off-season he’s had. He’s running around like a DB out here — not exactly. I’ll take that back.”

On RB Robert Turbin’s hip surgery: “Turbo’s got a really good regimen going up north and just kind of like the way it’s going. He’ll be ready for camp as well. Hopefully we’ll see him in the next couple of weeks sometime here so we can check up on him but all reports are great.”

On CB Jeremy Lane, who broke his wrist and tore an ACL on the same play in the Super Bowl: “Jeremy has had another concern come up in his arm and they’re going to stay with it. His knee’s doing great. His arm is going to take a little longer than we thought to heal.”

On WR Paul Richardson torn ACL in the Carolina playoff game:  “Paul could make it back for camp but we’ll be careful there. We just want to make sure that we get him back. Same with Jeremy. Paul has a little advantage over him – he’s been through it before.”

Other news: FB Derrick Coleman, who broke his foot warming up pre-game in October, was back with the starters. And the Seahawks draft class of 2015 was completed with the signings of contracts by DE Frank Clark, the second-round pick, and third-round pick WR/KR Tyler Lockett.