Hansen thinks he has political support for arena

In an interview with KJR, developer Chris Hansen spoke confidently about the Sodo project’s chances, admitted no deal was in hand for an NHL team and dismissed a rival in Tukwila. 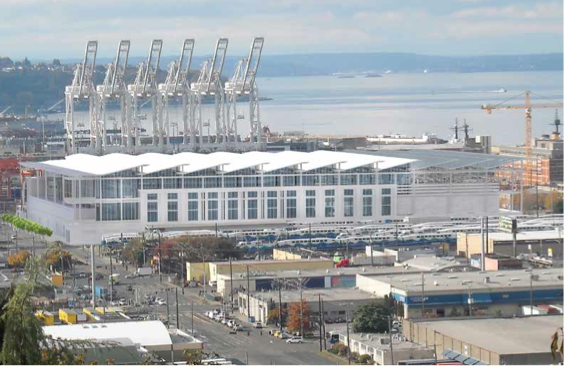 Chris Hansen thinks the Sodo location for his arena has much greater appeal than a suburban location. / 360 Architects

Chris Hansen thinks he has the political support on the Seattle city council to get his SoDo arena project approved this fall, but has no deal with prospective NHL owner Victor Coleman to be a partner in the arena nor owner of a team that would first occupy the arena.

“We have the (political) support we need,” Hansen said during an interview Tuesday afternoon with AM 950 KJR sports radio host Dave Mahler. “I think we’re pretty good. If we feel that changing, we’ll reach out. I feel we have the greatest place.

“(Mayor Ed Murray) has made a lot of positive comments. We appreciate his leadership on the subject.”

With the release of a final environmental impact statement that disclosed no deal-killing flaws in the Sodo proposal, but with no NBA team in hand, Hansen said he’s ready to cede first tenancy to hockey over an NBA team, which was mandated by his memorandum of understanding with the city and county councils.

“It’s not ideal to have hockey first, but because the NBA can take a little longer, if the NHL came first, that would be fantastic,” said Hansen, who called the process of turning the MOU into a final agreement leading with hockey “a matter of time.”

But he said no agreement is in place with Coleman. A native of Vancouver, B.C.., Coleman is a Los Angeles developer who is CEO of Hudson Pacific Properties, which has a real estate portfolio of 26 properties, including five in Seattle.

“We have not received anything, like five bullet points – zero,” Hansen said. “I’m not involved with (pursuing an NHL team via expansion or relocation).  Our job is to be as accommodating as possible. Any (proposal) can’t make the deal worse for the city or worse for (Hansen and his partners) financially. That’s it.

“Victor is great guy, someone I’ve spent some time with and someone I would enjoy working with, as well as his partners. The ball is in their court.”

Murray told the Seattle Times May 7 any hockey-first deal with the city, which would be obligated to provide borrowing capacity for $120 million to help fund arena construction, would need more private capital to make it work for an NHL team,  franchises that are less valued than NBA franchises.

“Folks have got to come up with a plan that’s viable for us to finalize this process,’’ said Murray. “The timeline you see for decisions on the arena are the timelines for when we either go forward, or we pull the plug.’’

Murray forecasted a proposal that could be voted upon by the city council likely would not happen before September. A key part of the proposal is the vacation of Occidental Street south of the Mariners’ garage. Hansen didn’t see a problem.

“Occidental has always been under the arena site,” he said. “It’s always been a part of the plan. If there were real concerns, they would have come up by now.”

But the council has not been asked to re-consider any aspect of the deal, shepherded in 2012 by Mayor Mike McGinn, who lost an election to Murray. Other council seats have changed hands, and more newcomers are likely after November elections.

“This deal’s just not doable, at least as it’s constructed today,” he told the Times. “I wouldn’t say it’s dead. But we are not going to go ahead with this arena without substantial changes. And there are no plans right now for those.”

Burgess’s goal was to reduce or eliminate public financial participation in the project, although a vote on a street vacation is mandatory for the council.

That resistance and the 21-month pace of the FEIS has allowed another player into the arena game. New York investment banker Ray Bartoszek has a proposal to build a 19,000-seat arena in Tukwila, near the old Longacres race course site. The project had a favorable political response because it will be funded privately. He has purchased the land and is seeking approvals from the Tukwila council.

Hansen said he had not spoken to the rival camp, and didn’t speculate on their chances, but was dismissive.

“A lot of people can talk, but we have over $100 million invested,” he said. “There’s a big difference between doing things and saying you’re going to do it.

“It’s not my place to comment (on their plan). But we did our homework on (the Sodo) site. We looked at sites north, east and south of Seattle. We’re very confident we picked the right location.

“I worked in Tukwila for three years between college and grad school. It’s not  easy to get to. If somebody wants to build a suburban arena, take a look at the successes in suburban arenas vs. the urban core. It’s dramatically different.

If (a suburban hockey arena) happens, it won’t dissuade us from building a basketball arena in SoDo.”