LHP James Paxton is on the 15-day disabled list with an injury to his left middle finger. That doesn’t bode well for a rotation already without RHP Hisashi Iwakuma. 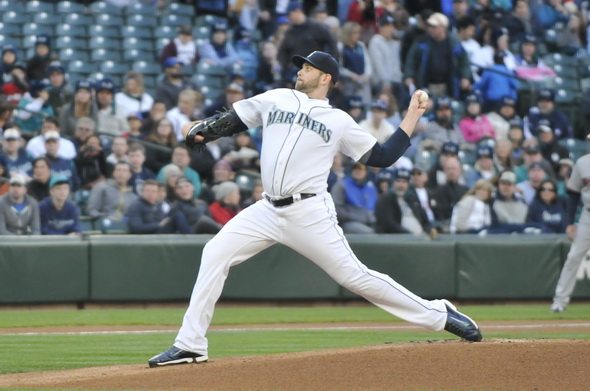 James Paxton lasted 4.2 innings Thursday night before leaving the game with an injury to the middle finger of his throwing hand. / Alan Chitlik, Sportspress Northwest

Pitching depth took a major blow Friday afternoon when the Mariners placed LHP James Paxton on the 15-day disabled list with a strained tendon in the middle finger of his throwing hand. To fill his roster spot, reliever Dominic Leone was recalled from Triple-A Tacoma.

Paxton (3-3, 3.70) ERA dominated in May before he was forced to leave the fifth inning of Thursday’s 5-3 loss to the Cleveland Indians at Safeco Field.

After the game, Paxton stood at his locker and sounded optimistic. He said the finger was already feeling better only a few hours after he was pulled after being inspected by Mariners trainer Rob Nodine.

“I went to see the doctor today,” Paxton said through a team spokesman. “I’m waiting for him to get here. We’re going to go over it and make a plan going forward. Right now, I don’t know anything more than I did last night, but hopefully I’ll know more pretty soon here.”

With RHP Hisashi Iwakuma on the 15-day disabled list (right lat strain), the Mariners are down two starters that were expected to anchor the middle of the rotation.

“It’s a tough loss. I mean obviously to think that we’ve lost our No. 2 and our No. 3 starters, that’s tough,” McClendon said before Friday’s game against the Indians. “But in this game, nobody feels sorry for you. You have to make the adjustments. And you have to take the stand: ‘Next man up. Let’s go.’ We just got to figure out who is the next man.”

Iwakuma isn’t expected back before the All-Star break, though he is at least throwing. He played catch Friday and reported no issues.

“Right now, Kuma’s not in the picture,” McClendon said. “He’s still a ways away. He won’t be the next man up. I can tell you that. I wish he was.”

If the Mariners don’t make a trade before Paxton’s next turn in the rotation, the most likely candidates to replace him are Rainiers pitchers Justin Germano or Mike Montgomery. In nine starts with Tacoma, Montgomery, 25, is 4-3 with a 3.74 ERA. The southpaw is 46-50 with a 4.24 ERA since beginning his minor league career in 2008.

The Mariners acquired him at the end of March in a trade that sent RHP Erasmo Ramirez to the Tampa Bay Rays. Montgomery has never pitched in the majors.

That isn’t the case for Germano, a 32-year-old journeyman that’s pitched for seven teams while going 10-30 with a 5.40 ERA in 96 games (48 starts). The right-hander’s most recent big-league stint came in 2014, when he appeared in two games for the Texas Rangers and allowed seven runs in 5.1 innings. This season in Tacoma, he is 3-2 with a 3.02 ERA in 12 appearances (six starts). If the Mariners call him up, it would require them to make room on the 40-man roster.

The Mariners also recalled Lucas Luetge from Tacoma Friday to temporarily replace LHP Joe Beimel. The 38-year-old was placed on the restricted list while he attends his son’s high school graduation. He is expected back by the end of the weekend.