After a big win in the varsity eight Sunday in New Jeraey, Washington became the first school to win the IRA championship regatta five times in a row. 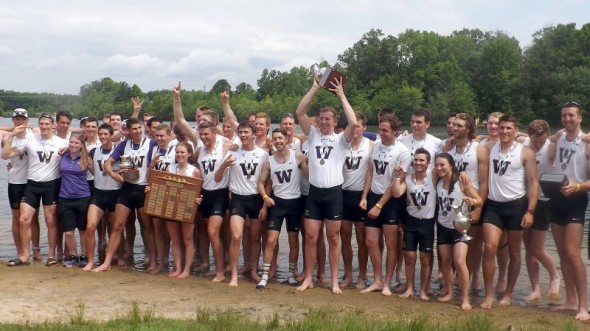 The Boys in the Boat would have loved this.

Washington’s heavyweight eight captured the national title for the seventh time in the past nine years and for the 18th time overall dating to 1923. This is also Washington’s ninth consecutive Ten Eyck Trophy, awarded to the school that finishes with the most overall points at the IRA competition.

Washington is the first school in IRA history to win the championship regatta five consecutive times. Washington broke a tie with Cornell (1909-12, 1955-58) and California (1999-02), winners of four in a row in their respective years. The regatta was first contested in 1895.

Starting in lane three, the Huskies pulled out to a seat lead over California early in the 2,000-meter race, increased it to three seats at 750 meters and were up a length at 1,000 meters. With 750 meters remaining, Washington had an open-water advantage and continued to pour it on, winning in 5:28.015 to second-place California’s 5:30.798. Princeton, Brown and Harvard trailed.

“I think we just nailed it,” seventh-year UW head coach Callahan told gohuskies.com. “We wanted to take control of the race right away, and even if they were going to come with us, we wanted to press the pace of the race. I was surprised to see us with such a commanding lead so early.

“Before the race, I said, ‘Look, no one really knows how fast you are, so go out and lay down the best piece of work you’ve done all year.’ I think they did that.”

Washington’s 2.8-second margin of victory is the largest in its championship streak. The Huskies beat Harvard by 2.7 seconds in 2011, Harvard and Brown by 2.5 seconds each in 2013 and 2014, respectively, and Brown by two seconds in 2012.

In the second varsity eight, Washington edged Princeton by a second to capture the Kennedy Challenge Cup for the 27th time and for the 10th time in the past 12 years.

The varsity four trailed by three seats at 1,250 meters, but rallied over the final 750 meters to score a three-second win over Cal.

The freshmen eight routed Cal by five seconds to take the Stewards Cup for the sixth time in seven years.

“It was really satisfying, especially with so many seniors on our team,” said Callahan. “There are seniors in every boat: The 2V, the 3V, the varsity. We’ve had really great leadership on this team all year. We had some tough races in mid-season, in April, and we had everyone stay together. That’s what happens when you have strong leadership. It’s really exciting to see them go out this way. It was certainly exciting in that last race.”

At the NCAA Women’s National Rowing Championships Sunday at Lake Natoma in  California, the UW earned a bronze medal in the second varsity eight race, its only podium finish of the competition. UW was sixth in the featured varsity eight race and fourth in the varsity four event.