Dominic Leone, just called up from Tacoma, was last man left in Mariners bullpen. He gave a bases-loaded walk in the 12th that cost the game, but the offense let the misdeed happen. 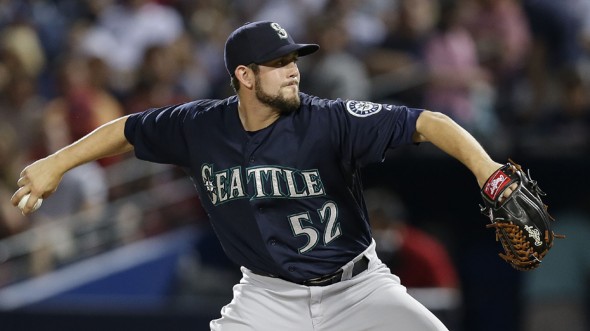 Any sub-.500 team will have an extra truckload of woulda-coulda-shoulda defeats. What happened Sunday to the Mariners was in a special category: Dreary.

After four hours, 36 minutes worth of blown chances, they lost to a team that blew many more chances. Entering the 12th inning at Safeco Field, the Cleveland Indians had 16 hits and four walks, but three runs to show for it. One would swear the Mariners must have had a quadruple play. Or two.

But at the end of the inning, the Indians had three more walks, two more hits and three more runs, all at the expense of 23-year-old relief pitcher Dominic Leone, the last and final reliever, just called up from AAA Tacoma only to fall down a mountain.

Bad as was the control of Leone, the real blame went to a lineup that produced five hits in 12 innings, including 1-for-11 from the 3-4-5 hitters.

“I can sit here and analyze (bullpen use), but the fact is, we got five hits,” said manager Lloyd McClendon. “We have to swing the bats better. You not going to win with five hits.”

Leone, who made it to Opening Day with the Mariners, only to be sent down May 8 after giving up two walk-off losses on the road, did a similar thing again, this time at home, with a bases-loaded walk to Michael Brantley.

The kid manned up to reporters in the clubhouse, but was clearly shaken.

“Unfortunately, it was one of those days when I just didn’t have it,” he said. “I tried my best. I told (catcher Welington Castillo), ‘Just stick in there with me.’ I felt like everything was just flying out.

“I’ve been in this position before — the team works its ass off, then the ball hasn’t rolled my way.”

April 30 in Houston, Leone, after a scoreless ninth, gave up in the 10th a walk-off single to Jose Altuve. Less than a week later in Anaheim, he gave up a walk-off homer to Carlos Perez. Now, this.

“The ball didn’t feel right,” he said. “I can make any excuse in the book, but I’m not gonna. This is baseball; that’s how it is. You got to do better than that.

“If they want me to be up here,  if I’m going to be up here, then I gotta perform. Right back on the horse. No time to feel sorry for yourself, or feel bad for me. This is the big leagues; grow up.”

Leone, a 16th-round draft choice out of Clemson in 2012, was coming off a surprisingly good rookie season in which he had 57 appearances, an 8-2 record and a 2.17 ERA. But this year has been a nightmare. Given his earlier story, returning him to the do-or-die position was almost cruel.

But after starter J.A. Happ needed 101 pitches to get into the sixth inning, when he gave up a homer and a hard single, McClendon went hard and heavy to the pen.

“We felt we were in good position to go to our relievers,” he said, referring to a 3-0 lead and relative rest among the relievers. But after burning through Tom Wilhelmsen, Charlie Furbush, Carson Smith, Joe Beimel, Fernando Rodney and Mark Lowe, there was no one else.

Beimel gave up a run in the eighth on a sacrifice fly to tie the game at 3, while the offense came up with one hit over the final six innings, a two-out double in the 10th by Seth Smith. But Robinson Cano grounded weakly back to the pitcher.

Came the 12th, and Leone walked the leadoff man, Lonnie Chisenhall. After Michael Bourn struck out, ninth-hitting Jose Ramirez sent a shot down the first base line that 1B Logan Morrison touched but couldn’t handle. The double put runners at second and third.

“I got to make that play,” Morrison said. “I’m on the line for a reason. No doubles. You can’t hit a double, and he hit a double. Gotta make that play and didn’t. It kind of came up. But it’s got to go in the pocket.”

After intentionally walking red-hot Jason Kipnis to load the bases, Carlos Santana popped out. Then came the two-out walk to Brantley. Two more runs came in on David Murphy’s single but were irrelevant.

“From the first batter (Chisenhall), I said, ‘Oh boy, I’m gonna have to battle today.’ I tried to work my way through. Got the strikeout to Bourn, got the popup. Brantley is tough hitter. I didn’t want to lay a cookie in there.”

He did something just as bad.

“Walks will kill you in this game,” said McClendon. And losses like Sunday’s will deaden the baseball soul.

Fortunately for the Mariners, Felix Hernandez will be on the mound Monday for the start of three games against the Yankees, and a big crowd is expected for the matchup against former Mariner Michael Pineda.

But Sunday, they shattered a kid’s confidence when it didn’t have to be.

Cleveland manager Terry Francona played the game under protest, now moot in light of the win, after a disputed final out in the 12th when Brandon Moss’s one-hopper bounced foul near the batter’s box but was caught on the fair side by Logan Morrison at first, who stepped on the bag. Fair-foul calls usually aren’t reviewable, and McClendon claimed the out was made before the fair/foul question was raised . . . The Mariners lead MLB in extra inning games, splitting eight . . . the game was a season high in innings and time.