Troubled by a mound muddied by a dubious decision on the retractable Safeco roof, Felix Hernandez put up two terrible innings after three brilliant ones. Yankees, 7-2. 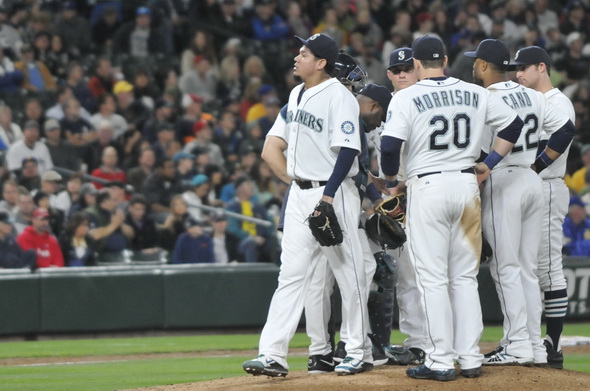 Rain, mud and a slope. Never a good combo in a Seattle winter.

But this was June 1, fercripesakes. No winter rules were in place Monday night when Mariners star Felix Hernandez began slip-sliding away, thanks to an open Safeco Field roof and a sneaky shower.

Dominant for three innings and disastrous for two, Hernandez fell apart far faster than the roof could close, leading to one of the most preposterous reversals in club annals, a 7-2 defeat by the New York Yankees (box score) foiled by elements despite a $50 million roof.

But afterward, neither Hernandez nor manager Lloyd McClendon would own up to the obvious: The unstable mound conditions distracted Hernandez into a loss of focus.

“A little bit, but that’s not an excuse,” Hernandez said. “I don’t know what happened. I lost my command. A lot of walks killed me. I made a lot of mistakes.”

Hernandez has had his share of bad games; all great ones do. But rarely has he gone from perfect to perfectly horrible in moments. After nine Yankees in a row were retired on 21 pitches, Hernandez started the fourth by giving up two singles to start, then two walks.

He was clearly flustered by the muddiness of the mound, which seemed to bother his landing. The first run scored on a wild pitch that went all the way to the stands. The second was on a double play grounder for a 2-0 lead.

The roof, closed during most of the pre-game, opened for the start despite showers in the forecast. When the precip began, the slow-moving roof took more than an inning to close.

Before the fifth, the grounds crew came out to apply Diamond Dry absorbent material. But it did no good. Hernandez walked the first batter, and five batters later, longtime nemesis Mark Teixeira laid on the ultimate indignity — a grand slam.

“(The mound) was fine — he just didn’t have his stuff tonight,” said manager Lloyd McClendon, sticking with the no-excuses party line. “He’s human, I guess. He lost it.

“(The Yankees) didn’t have any problems with it. I’m not gonna sit here and make excuses that it was the mound.”

Whatever it was — there is no baseball accounting for “E-roof” — the defeat made a couple of bad circumstances worse.

Yankees starter Michael Pineda, the rookie All-Star that general manager Jack Zduriencik traded to the Yankees for the ill-fated Jesus Montero after 2011, had no problems with the mound or the Mariners, at least until the seventh when he left after giving up two runs. But he showed the form that has made him the staff ace, while Montero continues his extreme makeover in AAA Tacoma.

The other circumstance was the need for a bounce-back from Sunday’s 12-inning debacle against Cleveland, a 6-3 defeat that burned up the bullpen and the fan base because the Mariners managed only five hits. What better fix than the ace, Hernandez, and a robust crowd of Yankees-haters?

But only 26,082 showed for a Yankees team in transition — except for the trusty DH Alex Rodriguez, the precocious Mariners rookie of 20 years ago who generates contempt in Seattle like no other athlete.

Then Hernandez lasted only 4.2 innings, in which he gave up seven runs, six hits and five walks, all season worsts and his most disastrous outing since Sept. 23 game in Toronto, in which he probably lost the 2014 Cy Young Award and cost the Mariners momentum they needed to make the playoffs.

Asked directly he became distracted after the third inning, he was firm.

“No, not at all,” he said. “I just made a lot of mistakes. The first inning I was calm, and then I got going a little bit fast.”

Rookie reliever Mayckol Guiape, called up after nine seasons in the minors, had a stellar debut, relieving Hernandez and retiring all seven batters, two with strikeouts. “Outstanding,” said McClendon . . . The revised top of the order, led by Logan Morrison did OK, going 4-16. “I liked what I saw,” McClendon said.