Thiel: Seahawks and the zen of the big target

Newcomer TE Jimmy Graham is something the Seahawks have never had — a 6-foot-7, 270-pound power forward to go get the ball, especially when the play breaks down to street ball. 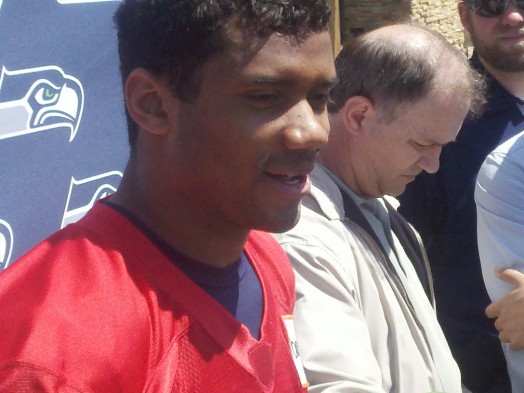 Russell Wilson finally has himself a big receiver who needs the ball only in the vicinity. / Sportspress Northwest file

Pro football and its systems, techniques, metrics and research gets more granular every year. Then once in a while something is said that reels everyone back to the big fundamental.

As TE Jimmy Graham offered Tuesday. The newest Seahawks trophy hire was asked whether his great productivity in the red zone is the result of a changed mindset.

“My mindset? Honestly, I’m just bigger than everybody,” he said.  “So it’s easy.”

There you have it. Football is easier than we think.

At 6-foot-7 and 270 pounds, Graham is the power forward the Seahawks offense has lacked.

If QB Russell Wilson has a flaw in his passing game (verticality aside), it’s his occasional reluctance to throw when receivers seem to be covered. It’s possible to cite numerous spectacular instances when he DID allow his receivers to win the 50-50 ball, but it’s harder to make a metric out of the pass not thrown. But the coaches know.

That’s why Graham was acquired for a first-round draft choice and valued C Max Unger: To make Wilson believe a throw into traffic is less of a gamble and more of a party.

Graham, at his first in-person group interview since his March trade from New Orleans that cocked eyebrows cross the NFL, told reporters there are similarities between Wilson and Saints QB Drew Brees. But the biggest difference is Wilson’s ability to improvise into second options.

“In New Orleans, everything was about timing,” Graham said. “When you hit that step, that ball is coming.  (In Seattle) when you hit a step and look back, maybe (Wilson) saw something and now he’s scrambling so there’s a second opportunity.

“This offense is dangerous on those second opportunities. When he gets out of the pocket and he’s able to work and kind of play street ball, which I’ve always been pretty good at, the offense is extremely explosive.”

Wilson, who also met reporters, understands what Graham means. During padless passing drills Tuesday against defenders, he drilled at least three red-zone scores to Graham, who finished each with his trademark thunder-spike.

“His timing is just so on point,” Wilson said. “He’s very, very quick, and he understands the game. Throwing to him is easy.

“He’s a superstar. He’s going to be one for a long time, and my goal is to help him continue to grow. He looked great today, as you guys saw, and that’s how he looks every day. It’s a spectacular thing.”

It would have been spectacular in the Super Bowl. Before scar tissue completely covers the events of Feb. 1, it’s worth remembering that in the season’s biggest game, the Seahawks completed only 12 passes, none to tight ends. The 13th completion would have had a much better chance with Graham than with WR Ricardo Lockette.

Paired with the probable second tight end, Luke Willson (6-5, 252), the Seahawks this fall can once again deploy with conviction the two-tight-end set, a favorite of coach Pete Carroll and his offensive coordinator, Darrell Bevell, especially when both TEs are genuine receiving threats.

“That decision will help us determine what we want to do with it. I think we have some advantages there.”

Beyond the field, the relationship between Wilson and Graham was burnished last week when Wilson skipped the first days of OTAs, with permission from the team, to attend in Florida the funeral of Graham’s personal manager and mentor.

“I’ve watched him from afar as a player and seen his growth throughout the years, Graham said, “but to walk in the building and see his character and to really experience who he is as a man, has been awesome.

“Last week, what he did not only meant a lot to myself, but my extended family — to know that he and the entire Seahawks (organization were) behind myself and my family.”

When the game gravitates down to street ball, it’s comforting for the big guy to know the little guy has his back there too.