Desperate for a hit or two, GM Jack Zduriencik pulled the trigger on a six-player trade, acquiring INF/OF Mark Trumbo and a young pitcher for Castillo, Leone and 2 prospects. 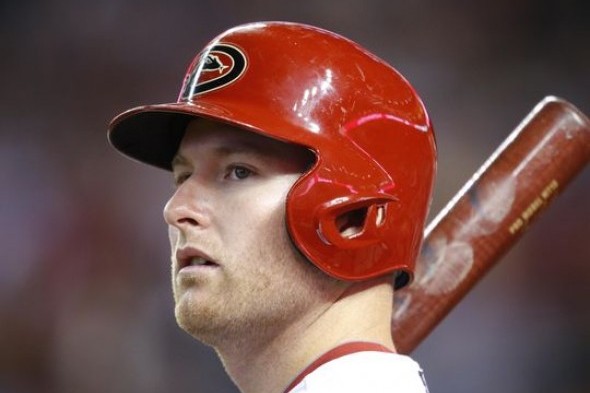 Mark Trumbo will come to the Mariners as part of a six-player trade. / Arizona Diamondbacks

Minutes after dropping a 3-1 decision to the New York Yankees at Safeco Field Wednesday afternoon in another lame offensive performance, the Mariners pulled off a six-player trade, acquiring INF/OF Mark Trumbo and LHP Vidal Nuño from the Arizona Diamondbacks in exchange for catcher Welington Castillo, RHP Dominic Leone and minor leaguers Gabby Guerrero and Jack Reinheimer.

Losers of five in a row and six of seven after getting swept by the Yankees, Seattle will make additional moves on its 25-man roster when Trumbo and Nuño report to the club.

“Trumbo gives us another proven, middle-of-the-lineup bat,” GM Jack Zduriencik said. “He brings power and experience to the club. We think his presence will stretch and deepen our lineup with a legitimate major league hitter.

“Nuño is a versatile left-hander who has experience starting and relieving and comes to us at a time when we have experienced injuries. He’s a tough kid who throws strikes and will be a nice addition overall.

“It is always tough to give up prospects and players that you like. In this case, our organizational depth at shortstop helped us with the decision on Reinheimer, and Guerrero is well thought of, but we all realize, that to get something you have to give something.”

Trumbo, 29, batted .259 with 10 doubles, three triples, nine home runs and 23 RBIs in 46 games with the Diamondbacks. He has started 40 games in right field and one at first base this season.

Trumbo was an American League All-Star in 2012 and participated in the Home Run Derby. He was drafted in the 18th round of the 2004 draft out of Villa Park High School in Orange, CA. He was acquired by the Diamondbacks Dec. 10, 2013, as part of a three-team trade with the Angels and White Sox.

The 27-year-old Nuño made three relief appearances for the Diamondbacks this season (0-1, 1.88 ERA). He also made eight starts for AAA Reno in the Pacific Coast League, going 3-3 with a 3.38 ERA and a 5.13 strikeout-to-walk ratio.

Castillo appeared in six games with Seattle after being acquired from the Cubs May 19 in exchange for RHP Yoervis Medina. In 30 games (12 starts) between the Mariners and Cubs, he is hitting .162 with eight runs, two doubles, two home runs and seven RBIs.

Reinheimer, 22, appeared in 48 games with AA Jackson, batting .277 with 25 runs scored, 10 doubles, one triple, one home run and 16 RBIs. The Mariners drafted him in the fifth round ofthe 2013 draft out of East Carolina University.

The Mariners, 1-6 on their current home stand, begin a four-game series with the Tampa Bay Rays Thursday night at Safeco Field. Roenis Elias (2-2, 3.07) will throw in the opener opposite former Mariner Erasmo Ramirez (3-2, 5.63).