How about a game of American-rules college football, mate? Pac-12, Mountain West considering a bowl game in Melbourne in 2016. Because America has run out of host cities? 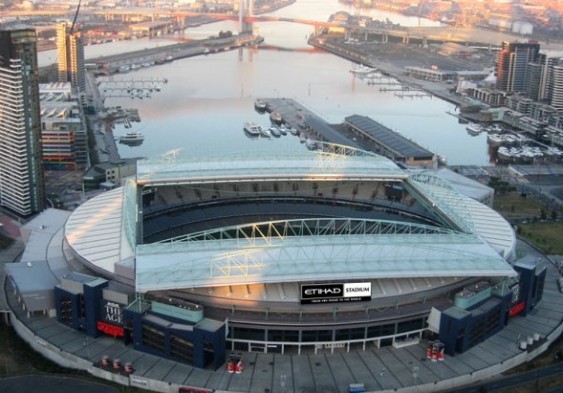 Etihad Stadium, with a retractable roof and seating for 53,000 in Melbourne, wants a college bowl game.

MELBOURNE — Hey, Huskies and Cougars fans, fancy a trip Down Under?

In the great tradition of the Bacardi Bowl, played in Havana in 1910, the Coca Cola Classic, played in Tokyo in 1988, the Toronto Bowl from 2007-1000, and the Bahamas Bowl played Dec. 24 in Nassau, it appears that college football is going international again in 2016.

Officials from Etihad Stadium in Melbourne are close to sealing a deal with the Pac-12 and Mountain West conferences to host a post-season bowl game in December 2016.

Paul Sergeant, CEO of Melbourne Stadiums Ltd., which manages Etihad, said this week, “It’s still a work in progress – we’ve made a lot of progress – but we haven’t signed a deal yet.”

Sergeant, who ran Wembley Stadium when the NFL played its American Bowl there, hopes to have the contract finished in the next couple of months.

He says that the bowl has not been given a name yet and will be given no special concessions as far as team match-ups are concerned.

“It’s out of our hands,” Sergeant said, “And in terms of selling tickets it’s almost immaterial.”

“We’re selling the concept and the game. It’s competitive and it’s authentic.”

Schools with name recognition Down Under (USC, Boise State) would be preferable to say, Colorado or New Mexico, but Sergeant is under no illusions about who might make the journey. The game likely will have a pairing of bottom-tier teams that are bowl eligible.

“We know we’re at the lower end of the pecking order,” he said.

If the deal is done, all Pac 12 and Mountain West schools will be told in advance that their teams could be traveling to Australia, so they will have plenty of time to get passports, visas and other travel-related requirements.

Although it’s easy to see this as a novelty act, Sergeant hinted that he wants to make it a long-term proposition.

Australians are some of the world’s most passionate and knowledgeable sports fans, and awareness of college football is on the increase.

ESPN shows plenty of live college football, with Pac-12 and Mountain West games often kicking off at fan-friendly times like noon on Sunday in Melbourne.

In addition, the number of Aussies playing in the college ranks has jumped dramatically, thanks mainly to punters like Cam Johnston of Ohio State and Tom Hackett from Utah, who won the Ray Guy Award last season asthe NFL’s best punter.

The total attendance for the games was less than 30,000.

Sergeant has already said on Melbourne radio that he is hoping for a sellout (around 53,000) at Etihad, a 15-year old venue with a retractable roof.