A 3-1 loss Sunday to Tampa made for a 2-9 homestand, worst in club history. Trades, tirades, shakeups — nothing is working, including an epic blunder Sunday by Nelson Cruz on the basepaths. 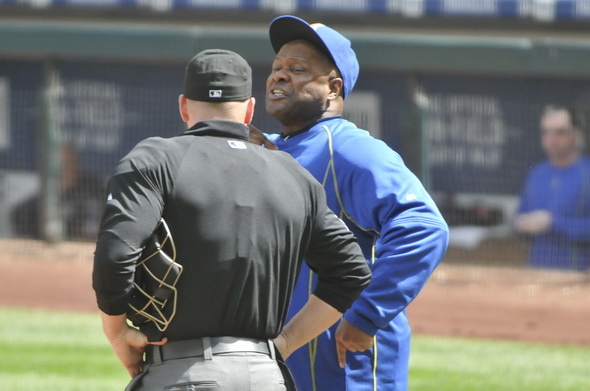 The Mariners followed a 6-3 homestand with a 6-3 road trip to get to .500 May 27 for the first time since April 12 (3-3), certainly a sign that a seasonal turning point was upon them as an 11-game homestand dawned. And that was true.

They turned, all right: The 2-9 record, completed Sunday with a 3-1 loss to Tampa Bay (box score), was the worst homestand of 10 or more games in the club’s 38-year-plus history.

Except for light from 1995-2002, despair has hung like fog upon this franchise. The current feat of ineptitude, with a $120 million payroll and expectations of contention, is staggering — particularly in view of good starting pitching.

Which, ironically, is what 27,906 at Safeco and a TV audience said about Cruz in the fourth inning when he produced the daily epic-fail metaphor that keeps this blunder boat afloat.

Seth Smith’s double and Cruz’s single put runners on the corners with no outs and Kyle Seager up. If there was a moment to get into the grill of formidable Tampa starter Chris Archer and his slider from hell, this was it.

But Seager struck out. So did newcomer Mark Trumbo. Then, with Logan Morrison up, Cruz inexplicably broke for second.

Was it a hit-and-run? Was it a Seahawks-style read-option? Was it a desperate Little League play to draw a throw and a rundown that would allow Smith home before the out? Did manager Lloyd McClendon lose his mind?

McClendon wasn’t taking the bullet for this one.

“If my general manager thought I put that play on,” he said indignantly, “I should be fired.

“Nellie thought he saw something that wasn’t there.”

What it was, according to Cruz, was a misread of a base-running signal.

“I got mixed up about the (steal) signs,” he said. “I thought it was to fake (a steal). I went, and then stopped. I was trying to make something happen.”

He almost did. In the rundown, Smith broke for home and nearly scored before the third-out tag. But he didn’t.

Cruz’s brainlock was the equal of one earlier in the homestand, when Cano killed another rally by allowing himself to be picked off first base when he was staring into the outfield as he wandered off the bag. These are Little League mistakes being made by guys who combined for $40 million of the payroll this season.

Then there was Felix Hernandez, who lost his focus against the Yankees because of a muddy mound after the Safeco roof apparently strained a hammy before finally doing its job to shelter from the storm.

Also in this stand, a desperate McClendon tried the old ejection trick. He complained about the strike zone to not just the home-plate arbiter, but ran to all four umps to finger-waggle and berate. He completed what was believed to be the first harangue-cycle in club history.

Didn’t work either. Nor did lineup changes, including putting Morrison in the leadoff spot.

They even tried a trade. GM Jack Zduriencik dumped OF Justin Ruggiano, the one bench player who had a smidgen of upside, and acquired Trumbo, yet another big-fly / big-whiff guy, of which the Mariners have battalions. Ruggiano was hitting .214/.321/.357. Trumbo has two singles in 16 at-bats after an 0-for-4 Sunday, reaching only on an error.

In those 11 games, the Mariners scored 21 runs, never more than three in any one. The two wins were by 2-1 scores. Twice they lost to starting pitchers they traded away — Michael Pineda of the Yankees June 1 and three days later, Erasmo Ramirez of Rays.

McClendon even caved on his stubbornness around closer Fernando Rodney. It worked Saturday night, when the Mariners won with a ninth inning from young Carson Smith. But McClendon said it was temporary, and likely closer-by-committee until they get Rodney, in McClendon’s words, “cleaned up.”

Huh? Has this been a hygiene issue? Is it something to be fixed with Spackle and Bondo?

Apparently, it has something to do with Rodney’s pitching mechanics. Whatever, he wasn’t part of yesterday’s little despair. Nor was another continuing puzzle, Cano, who was rested Sunday to give him two days off in a row.

Trades, tirades, shakeups — nothing has worked. Now, after 20 games in a row, they will try a day off.

My guess is it’s more like a python’s remorseless squeeze. There’s time to wiggle out, but at 25-32 in a very competitive division, breath is hard to come by when great players play poorly and regular guys are irregular.

The Mariners’ previous worst homestand of 10-plus games was in their expansion year, Sept. 6-14, 1977 (2-8 in 10 games). They also went 3-8 in July 1983 and July 1992 . . . Squandered again was another sterling outing from a starter. Rookie Mike Momtgomery, in his second big-league start and first against his old team, pitched seven innings with five hits, one walk and three strikeouts . . . Seattle starters have a 1.88 ERA over the past six starts . . . Logan Morrison has a career-best 14-game hitting streak . . . Rays starter Archer has 23 strikeouts in 15 innings against the Mariners in two starts, 11 Sunday.

An eight-game road trip starts in Cleveland Tuesday when Roenis Elias (2-3, 2.94 ERA) faces Indians’ ace Corey Kluber (3-6, 3.61). After three in Ohio, they have three in Houston and two interleague games in San Francisco.