More than four months after hurting his elbow against Green Bay and playing one-armed in the Super Bowl, the All-Pro CB declined surgery and is back at practice. But it’s a a new feeling. 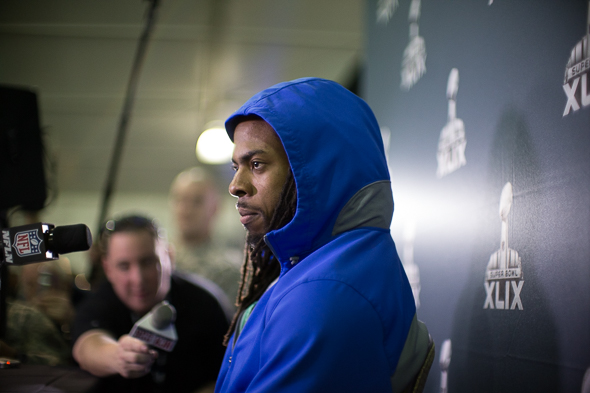 Surprises as a father of a newborn? Check.

After the frivolities traditional in a Richard Sherman presser, we worked down to the weightier stuff on a warm Wednesday afternoon: How bad was your left elbow injury in the Super Bowl?

Actually, the one-armed Sherman didn’t find a way. Nor did the rest of the Legion of Boom, giving up 14 fourth-quarter points to the Patriots after owning the final period in the NFL regular season as Lucy owned Charlie Brown’s kickoffs.

So much attention was sucked up by the black hole of the final misbegotten offensive play that little notice was paid to the fact that four DBs played hurt or were injured in the game.

Three came in hurt: CB Sherman and FS Earl Thomas (separated shoulder) were hurt in the NFC Championship. SS Kam Chancellor injured his left knee during the Friday practice before the Super Bowl.

In the run-up, Thomas and Sherman fibbed about their degrees of readiness. What choice did they have: Tell Pats QB Tom Brady, “Throw here, Tom — I’m hurt”?

Chancellor wasn’t available to media after he was injured, but he would have dodged too. In the game, nickel CB Jeremy Lane broke his arm and tore up his knee on the same play, an interception return. In addition, DE Cliff Avril was knocked out of the game in the third quarter because of a concussion.

All of the casualties were duly noted by Brady and coach Bill Belichick. In the span of 10 minutes of the fourth quarter in Glendale, covering 18 plays and two touchdown drives, Brady took the Patriots 76 yards in eight plays, then 64 yards in 10 plays. He completed 13 of 15 passes.

Nothing like that has happened to Seattle in the three years its defense has been the best in the league.

Naturally, the Seahawks can’t talk about injury consequences regarding a game outcome because it violates the unwritten protocol in all sports: Injuries are no excuse.

True. But they can be reasons.

Same was true a year earlier, when the Broncos Super Bowl team had multiple missing parts. But with a defeat of 43-8, no one dared suggest a healthy Bronco or two would have made a difference.

In February, the Seahawks, despite all, came up one play short of winning. Yet the coincidence of all the injuries to one unit remained ignored even by the principals.

“We didn’t talk about it,’’ Sherman said of his off-season conversations with teammates. “It was just one of those things. You look up at the end of the game and you’re like, ‘Wow, we kind of battled through this.’ . . . It’s never any excuses for us. We played as hard as we can. Unfortunately, they came out with the victory, and you’ve always got next year.”

No one disputed they played hard. But no one will speak to why they didn’t play as well as they had. Since they were still out on the field, the man-code says shut up.

Sherman is right about one thing: There’s always next year. They’re more than four months into it.

In that time, Sherman rested the arm, underwent multiple therapies and not that long ago began his first five-pound curls. He also decided to forgo surgery, particularly after finding out he would be out about nine months.

In the padless drills Wednesday, he looked like his old animated self, chasing would-be pass recipients without protection on the arm.

He smiled sheepishly, his chiseled arms getting the 20-reporter stare.

“I’m not trying to put it in too many stressful positions,” he said, conceding a point that knowledgeable trainers know: After the first major injury, things are never quite the same.

“Apparently a lot of O-linemen get the injury and do just fine with it,” he said, sounding hopeful. But O-linemen don’t have make arm tackles on 250-pound tight ends.

Sherman has had his share of  bumps, bruises and strains, but never an injury where surgery was a realistic option. It’s new territory.

He’s persuaded he’ll be as good as new by fall. But avoiding stressful positions in football? If he manages that, he’ll have transformed the game.