With a 1-2-3 inning, Olympia native and ex-Washington State pitcher Adam Conley made his major league debut Wednesday out of the Marlins bullpen in Toronto. 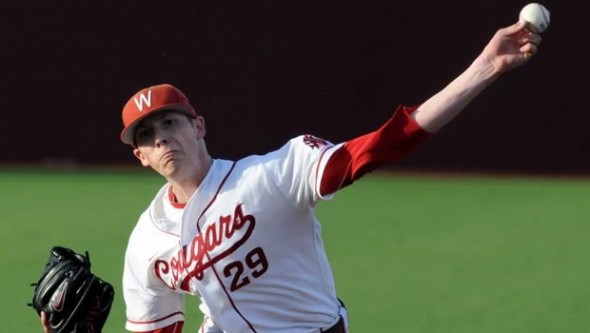 Former Olympia High School and Washington State pitcher Adam Conley looked cool, calm and collected when he made his major league debut Wednesday. That’s what fatherhood can do for a man.

“I’ll tell you what, when my daughter was born, it was a lot more emotional than my major league debut,” Conley said Thursday afternoon in a telephone interview from Marlins Park prior to the Miami Marlins’ game with the Colorado Rockies.

Three months after Amelia Conley made her debut; three weeks after her dad turned 25; and three years after Adam’s first full season in the pros, Amelia was on hand with proud mother Kendall Conley when Adam pitched a 1-2-3 eighth inning at Toronto’s Rogers Centre. Conley needed just six pitches, but it was too little too late in Miami’s 7-2 loss to the Toronto Blue Jays.

“The most nerves I think I felt is when the (bullpen) phone rang and it wasn’t for me,” Conley said.

Not that Conley didn’t feel a few butterflies.

“Nerves came up there,” he admits. “I’ve pitched out of the bullpen before, but I think it may have been magnified just being my first big league game.”

Conley pitched primarily out of the bullpen at Washington State before often dominating as a starter during his junior season (6-7, 3.50) in 2011. Conley turned down the Minnesota Twins when he was drafted out of Olympia in the 32nd round, but he passed up his senior year with the Cougars to sign with the Marlins for $625,000 as a second-round pick.

The Marlins were cautious with Conley after a long college season and used him in just two minor league games at the end of the 2011 season. Since then, Conley has consistently been listed among the top prospects in the Marlins organization. He compiled a 30-20 record in the minor leagues, working almost entirely as a starter.

Elbow problems sidelined Conley for much of his first Triple-A season last year, but he improved to 5-2 at Triple-A New Orleans Friday with a strong performance before friends and family in a Pacific Coast League game at Tacoma. He got the call to the majors on Sunday in Tacoma, though the transaction did not become official until Monday, when he suited up in the bigs for the first time in Toronto.

“I’ve had the attitude for the last couple years that if they called and wanted me to come to the big leagues, I’d be ready for it,” Conley said. “I’ve learned a lot more about myself and pitching and what I need to do to take care of myself. The longevity of a season; we play so much.”

Conley, a lean left-hander at 6-foot-3 and 185 pounds, consistently throws in the low 90’s and possesses  a slider that is particularly tough on left-handed batters. He’s long been known as a ferocious competitor, one of the traits that attracted Gabe Sandy, the Marlins scout who first began keeping tabs on Conley in high school.

Sandy has spent all nine years of his scouting career with the Marlins. Projecting the long-range potential of young baseball players is exceedingly difficult. When Conley became the first Sandy-signed player to make it to the majors, Sandy made sure he had the best seat in the house Wednesday at his home outside Portland.

“I was glued to the TV,” Sandy said enthusiastically. “I was watching every pitch.”

There are no guarantees, of course, but Sandy shares Conley’s hope that the pitcher never returns to the minors. Miami’s pitching staff has been hit hard by injuries, but whatever happens to Conley, player and scout promise to cherish every moment Conley wears a major league uniform.

“It says ‘Marlins’ on the front,” Sandy said. “It says ‘Conley’ on the back. Then on the inside of the jersey, somewhere it says ‘Sandy.’”

Conley is the 34th former WSU player to see action in the major leagues, and the first since Mark Hendrickson (a former NBA player who spent most of his college days playing basketball) pitched for Baltimore in 2011. At that time, the Cougars had at least one player in the majors every year since 1948. The only colleges ever to compile longer streaks were USC (since 1939) and Oklahoma (since 1945).

Time will tell if Conley develops into a major league all-star like fellow Cougars John Olerud, Ron Cey and Aaron Sele. Even if he does, Conley sounds like he’ll be more impressed with Kendall giving birth (“I can’t tell you how proud I am of her”) and with Amelia doing pretty much anything.