The story of the rise of Chambers Bay from industrial wasteland to premier golf destination is about to go global. Here’s an eyewitness report from one who watched it every step of the way. 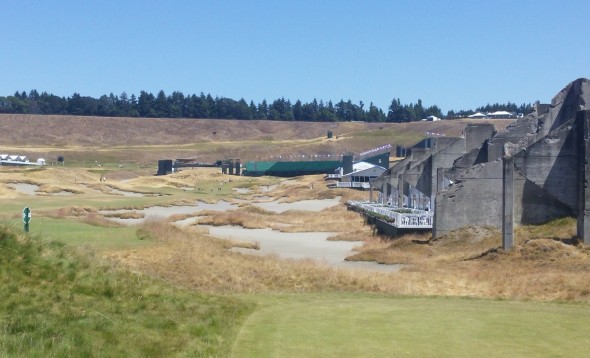 This is the view from the tee box at No. 18, a 604-yard par 5. A group including Dustin Johnson is on the green. On the right are hospitality tents nestled between the concrete remains of giant sorting bins from the sand-and-gravel operation that ended in 2003. Next to the green is a 6,000 seat-grandstand (dark green structure). / Art Thiel, Sportspress Northwest

UNIVERSITY PLACE — If you ever misspent part of your youth in scrub woods on public land close to an urban area, you know the scene — a fire pit, obscured by brush, circled by rocks and logs, surrounded by beer cans. The party hole of bored teenagers in the long twilight of a Northwest summer.

Now the same ground is trod by Tiger Woods and an elite battalion of the world’s best jet-setting golfers, followed by legions of well-heeled admirers who are part of one of the world’s most prestigious sports events — the most significant sports event hosted in the Northwest.

The transformation of Chambers Bay from badlands to world-class public destination is likely the captivating storyline of the U.S. Open that begins Thursday, almost no matter who wins — unless, of course it’s 15-year-old Cole Hammer. Or Woods, at 39 still the world’s most intriguing golfer.

The star of the show is the eight-year-old course. After 15 years of helping nurse it from preposterous to wondrous, Tony Tipton is still blinking at the extreme terrestrial makeover beneath his feet.

“The golf architects wanted to see every bit of the place,” Tipton, now Pierce County’s director of parks and recreation but a 30-year veteran of county public works jobs, said Sunday. “I listened to them describe (in 2003) what it would look like when it was done: Fairways, greens, tee boxes. I’m not an artist; I don’t have their vision and talent. I just said, ‘OK,’ and took them all over the place.

“It was worse that just wasteland; the worst sort of plants moved in — scotch broom, blackberries, scrub alder. It was like when good neighbors leave a home vacant and bad neighbors move in.”

“It became the local party ground,” said Tipton, who graduated from Decatur High in Federal Way and Pacific Lutheran University in Parkland. He is wise in the ways of South Puget Sound. “Lots of logs and rocks to sit on and watch the fire — and the deer, coyotes, rabbits.”

In 1993, the county bought property while it was still a productive sand and gravel mining operation by Glacier Northwest, which proudly proclaimed that the deposits went into building every skyscraper in Seattle for more than 100 years. The sale was $40 million for 610 acres that included two miles of Puget Sound beach with a western exposure.

Mining shut down by 2003, and all of the equipment was removed. When the course opened in 2007, vestiges of the industrial history remained — concrete walls from the plant’s giant sorting bins, a dilapidated pier that served huge barges, and the shoreline railroad, still operated by BNSF.

“The remains of the mining operation creates a linkage to the industrial past,” Tipton said. “A hundred years from now people might think this was always a golf course and a park. But these reminders tell a different story.

“People come here today from Michigan or Iowa and wonder, ‘What is that?’ It launches us into a discussion about Pierce County’s blue-collar ethic and industry. That’s our roots. If we got rid of those symbols, it’s just another nice beach course.

“And people love to stop and watch the trains go by.”

To the uninitiated, the course will be confounding — instead of Doug fir, rhododendrons and lush green grass typical of narrow western Washington courses, Chambers Bay features butterscotch-colored terrain that is lumpy, sprawling, treeless and festooned with remnants of its industrial past — but on 280 acres that allows for fairways wide as football fields are long and greens the size of small European principalities.

When Fox Sports TV takes its cameras off the golf and the majestic seascape and glimpses the enormous, albeit temporary, infrastructure that puts on a U.S. Open, it’s understandable why the U.S. Golf Association jumped at Chambers Bay. Unlike any other championship-caliber course in the Northwest, the huge property can accommodate the small city that is required for staging America’s premier test of golf.

Even from my previous visit last month, Chambers Bay has burped up a massive white-tented empire — sponsor tents, hospitality tents, two merchandising tents of USGA stuff (41,000 square feet), a tent for the 1,200 credentialed media from around the world, and Fox’s own compound that is a town within a town.

Plus grandstands at various points on the course, including a 6,000-seat bleacher, biggest in U.S. Open history  — think McCarthey Sports Center for Gonzaga basketball — bordering the 18th green.

And the best part of the whole shindig — it’s a public park. No country-club preeners and poseurs. Except for about a month surrounding the mammoth undertaking of an Open, the course is open to hikers, picnickers, singers of songs and walkers of dogs.

“We have many more users for this site of its other features than users for golf,” Tipton said. “The hiking trails, the beach, the playground, the Central Meadow and the North Meadow.

The non-golfers get to use it for free. All they need for another return to roots is a fire pit surrounded by beach logs. I’m volunteering to supply the beer cans. 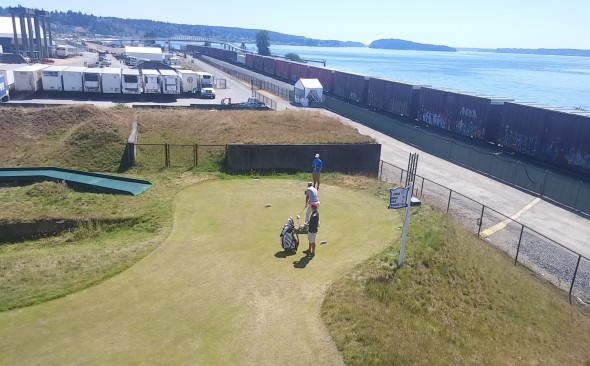 Dustin Johnson prepares a tee shot during a practice round Sunday while a BNSF freight train rumbles behind him at 40 MPH along Puget Sound. / Art Thiel, Sportspress Northwest