From Tiger Woods’ struggles to Phil Mickelson’s quest for the career Grand Slam, this week’s U.S. Open at Chambers Bay has no shortage of compelling narratives. 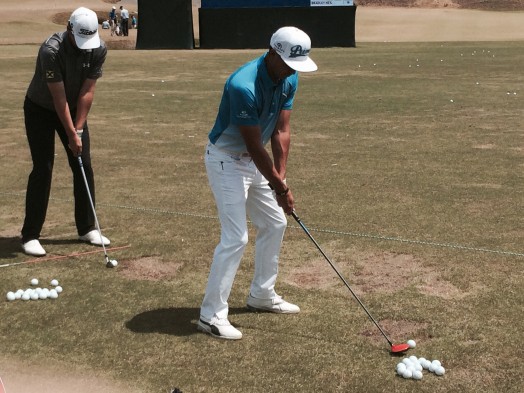 Rickie Fowler warmed up at the Chambers Bay driving range Monday before embarking on his practice round. / Adam Lewis, Sportspress Northwest

UNIVERSITY PLACE — There is one certainty about the 115th U.S Open this week at Chambers Bay: The golf world will ooh and ah at the scenery.

Panoramic shots of Puget Sound, Olympic Mountains, Mount Rainier and the undulating links-style course designed by Robert Trent Jones Jr. will fill the Fox Sports TV broadcast. Temperatures are expected to stay in the 70s with only partial cloud cover and a slight chance of rain.

Everything else is less known.

By now, the backstory is familiar.

The U.S. Open, reserved for immaculate old courses, will instead be played at a Pierce County-owned municipal that opened eight years ago on what used to be a sand and gravel pit.

Fairways in the summer are a green-and-brown blend. The greens are discolored and spotty. The roughon some holes is a burnt gold that resembles the rolling wheat fields of eastern Washington. That comparison works until it is realized Chambers Bay has massive dunes that overlook an inland sea.

And trains will be rolling through adjacent to the best golfers in the world while they drive and putt.

“It could definitely get you, because they don’t mind honking their horn on the train,” said PGA Tour player Ryan Moore, a Puyallup native. “They definitely do it at least a couple of times going by.”

This isn’t your grandpa’s U.S. Open. Heck, this isn’t like any U.S. Open ever.

Here are a few stories to watch:

Will golfers love it or hate it?

Change scares people. Professional golfers, by and large, are creatures of habit that dedicated thousands of hours to perfecting a game impossible to master.

Since the first U.S. Open in 1895, the event has never been played almost entirely on fine fescue grass.

The grass and undulating layout has its detractors and supporters.

In late April, Ian Poulter tweeted that those who came and played the course said it was a “complete farce.”

Ryan Palmer, the No. 26-ranked golfer in the world, dismissed USGA executive director Mike Davis’ idea to set up slanted tee boxes and criticized the greens.

“As far as the greens are concerned, it’s not a championship golf course,” he said. “Not with the way some of the greens are and the pin placements they can put out there.”

On the other end of the spectrum, Phil Mickelson in recent weeks raved about Chambers Bay, dubbing it a “modern links course” and compared it to St. Andrews because, as with the Old Course, it takes numerous rounds to learn how the ball responds to the mounds on the fairways and greens.

Jack Nicklaus, a four-time U.S. Open winner, loved it when he heard players complain about a course. That’s when he knew the whiners wouldn’t contend.

Will Tiger make the cut?

The former No. 1 player in the world has fallen far. The 39-year-old is no guarantee to make the cut as he continues to chase Nicklaus’ record of 18 majors. Woods has 14, and his game, after years of injury, and dubious personal decisions, is not close to what it used to be.

Earlier this month at the Memorial Tournament, he shot a career-worst 85 in the third round. Playing alone and in the first “group” out on the final day, Woods shot a two-over 74 by playing the last two holes three over to finish at plus-14, a career worst. As of Monday, he was the No. 195-ranked golfer in the world.

Nothing would ignite the crowd this week more than Woods playing well. But there’s no reason, based off his recent play, to think it will happen.

Jordan Spieth and his caddy

Gig Harbor resident Michael Greller was a school teacher in University Place before he became Jordan Spieth’s full-time caddy after first looping for him at the 2011 U.S. Junior Amateur at Gold Mountain in Bremerton.

Four years later, Greller is now a celebrity after Spieth won the 2015 Masters in April. According to Spieth Monday, some fans chanted “Greller! Greller!” while he was on the Chambers Bay practice green.

“We’re giving him some smack for it and he’s taking it from his caddy buddies, too,” Spieth said.

The 37-year-old used to caddy at Chambers Bay, so he arguably knows the course as well as anybody. But he will have to adapt after it underwent a makeover for the U.S. Open.

“I think off the tee it’s really going to help,” Spieth said. “Into greens, I don’t think he’s seen where the pins are going to be, and he’s certainly hasn’t seen the greens the way we’re going to play them this weekend. So we’re going to have to adapt to that.”

Will Mickelson exorcise his demons?

Mickelson turns 45 Tuesday. Winning the U.S. Open would be the ultimate birthday present.

He has finished second six times. It’s the only major he hasn’t won.

Since tying for second at The Masters in April, the affable San Diego native has been up-and-down in 2015. But he tied for third the past weekend at the St. Jude Classic and his great wedge play sets up well at Chambers Bay, which requires great creativity around the greens.

If he could shed his gut-wrenching U.S. Open history and win, it would be the ultimate redemption story.