Three-time U.S. Open winner Tiger Woods found many mysteries at Chambers Bay. He described them all at a press conference that sounded as if he were talking himself out of success. 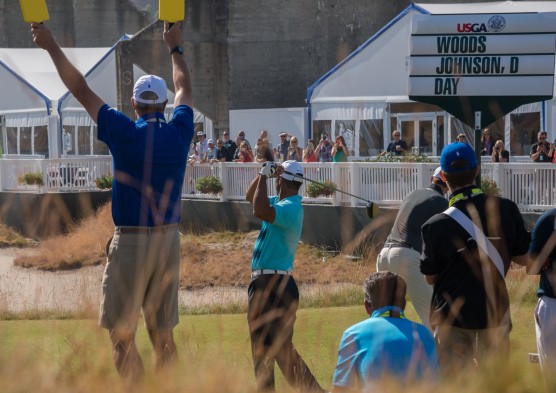 Tiger Woods, practicing in front of the hospitality suites along the 18th fairway, said Chambers Bay is unlike any course that has held a major championship. / Jonathan Nesvig

UNIVERSITY PLACE — Carefully but unmistakably, Tiger Woods threw down with Mike Davis, U.S. Golf Association executive director and the Lord Voldemort of Torture Chambers Bay. At issue was the degree of cruelty that the sorcerer will apply to the settings of the U.S. Open Thursday.

In his pre-tourney press conference Tuesday, Woods cunningly played the potential innocent victim. Trying to use his bully pulpit to plead for leniency for himself and his 155 fellow golfers, he invoked Davis’s name at least four times, referring to his daily responsibility for pin placements, hole length, morning vs. afternoon and all the diabolical variables at Hogwarts by the Sea.

“You’re going to see some different things this week than you have (with) probably any other major championship that we play,” Woods said.  “It’s certainly different for a U.S. Open, that’s for sure.

“I think one of the more dramatic things I’ve noticed is how different it plays from morning to afternoon. It gets so much faster and drier . . . plus we’ve had two different winds. One has come out of the southwest, and one out of the northwest. It’s just amazing how much it plays differently, with the different winds.”

Woods stopped short of flat-out criticism, but it sounded as if he were Dorothy trying to describe the inside of a tornado to Auntie Em.

What was plain was that he was pleading to Davis through the media — which for any other player ranked 195th in the world would be audacious — to get him to go light.

The almost-complaints drew an inquiry at the presser from none other than Robert Trent Jones Jr., the Chambers Bay architect and long-time Woods family friend who spontaneously assumed the role of reporter with a question about whether his golf baby provided top golfers enough play-making options.

“But it’s unlike any other major championship I’ve ever had to prepare for, having to hit so many different tee shots. There’s three or four different tee shots on almost every hole. Mike has an opportunity to play basically 36 holes and 36 different options . . . I’m kind of happy that I’m playing actually in the afternoon the first day, get a chance to watch what some of the guys do in the morning to get a feel for it and see what’s going on.”

Good to hear Woods is happy about something. At 39 and absent a major title since 2008, he hasn’t had a lot of laughs lately, personally or professionally. Not only did he and his most public squeeze, Olympic skier Lindsey Vonn, split the sheets, he shot an 85 a week ago Saturday, the worst score of his career.

This season he’s had as many scores in the 80s as the 60s — two. It’s true that at the Masters, he rose as high as fifth place before fading Sunday to 17th, 13 strokes behind Jordan Spieth, 18 years his junior. But it was more flicker than flame.

Woods took pains to explain he is engaged in a long, slow remake of his swing, and “things are starting to come together, piece by piece,” he said. He didn’t explain what he was changing or why he felt the need, but it’s obvious to anyone familiar with human physiology — he’s compensating for age and injuries.

Woods’ litany of Chambers’ many mysteries, and tagging the man responsible for potentially adding to his personal misery, sounds to the cynical as if he were prepping for a letdown.

Especially after he dropped this one:

“I’m more curious to see how many guys hit sprinklers this week, because the sprinklers are literally sometimes six inches off the green.”

Wait until Woods finds out that the engineers operating the BNSF freight trains that rumble over the shoreline next to the course are big Phil Mickelson fans. Right in the middle of Woods’ backswing on No. 18, they are conspiring to lay on the horns.

It seems at this point, Woods is ready to believe anything about Torture Chambers Bay.