After missing the cut in his past two events, World No. 1 Rory McIlroy maintained he’s in “full control” of his game as he looks to win his second U.S. Open. 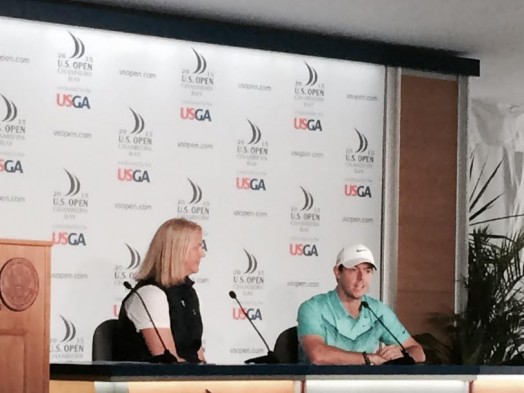 World No. 1 Rory McIlroy has won three tournaments in 2015, but he also missed the cut in his last two starts. / Adam Lewis, Sportspress Northwest

UNIVERSITY PLACE — Rory McIlroy didn’t back down Tuesday at Chambers Bay when a reporter asked if he can relate to LeBron James, who claimed he was the best basketball player in the world Sunday after the Cleveland Cavaliers lost Game 5 of the NBA Finals.

Does, McIlroy, the No. 1 golfer in the world, view himself with the same confidence as James does his game?

“When LeBron talks about that, that’s not confidence, that’s a fact,” McIlroy said. “He’s carried his team in these Finals. So if you look at the numbers, you can really see he is the best player in the world.

“I guess, for me I feel the same way, when I look at the world rankings and I see my name up at the top. If you look back at the last four or five years, I guess I’ve won more majors than anyone else in that time period.”

According to oddsmaker Bovada, McIlroy as of Monday had a 7-1 shot to win the U.S. Open, best in the 156-player field.

Questions about McIlroy’s confidence come after the Northern Ireland native strung together a pair of dreadful performances his past two events. He missed the cut at the BMW PGA Championship in England and again at the Irish Open at the end of May.

The nadir came when he shot at an opening-round 80 at Royal County Down near his hometown and missed playing on the weekend in the Irish Open for the third consecutive year.

“I think it was my mind had enough golf rather than my body,” McIlroy said. “I sort of had to get back, especially after playing at County Down, just to get back to playing my normal game, hitting shots the way I like to see them, swinging the way I want to swing.”

“Anyone that can get elevation on their iron shots and get a little spin on the ball — that’s the way you’re going to get it close to these pins,” he added. “All I tried to do last week was just get back to playing my normal game, and I think that’s the way I’m going to do well this week.”

It hasn’t been all bad for McIlroy in 2015. He has three victories, including the WGC Match Play Championship in San Francisco and the Wells Fargo Championship in Charlotte. He intimated he can live with missing cuts as long as he continues to rack up victories.

“I didn’t obviously want to miss those two cuts in Europe,” McIlroy said. “But I think that’s just the way I’m going to be. I’d rather in a six-tournament period have three wins and three missed cuts than six top-10s. Volatility in golf is actually a good thing. If your good weeks are really good, it far outweighs the bad weeks.”

Shortly after the debacle at the Irish Open, McIlroy said he spent three days touring London. Walking around the city put him in the “right frame of mind” for Chambers Bay’s grueling walk, which totals about eight miles and features massive elevation changes.

“I think I walked about 10 miles a day,” he said of the vacation, which included his first trip to the London Eye. “So that helped.”

McIlroy compared Chambers Bay to Muirfield Golf Club in Scotland, site of the 2013 Open Championship. In that tournament, he shot 79-75 (12 over) and missed the cut by four strokes.

Citing its firmness, McIlroy said Chambers Bay “plays more like a links course than some links courses” and that it will favor longer hitters. That should bode well for the 26-year-old, considering he’s eighth on the PGA Tour in average driving distance (305.5 yards). It won’t hurt having grown up playing links tracks in Northern Ireland, either.