Fox Sports TV is bringing to the golf world 38 hours of live action from Chambers Bay, and has more than 700 people on hand and much cool technology to show off the tourney and the region. 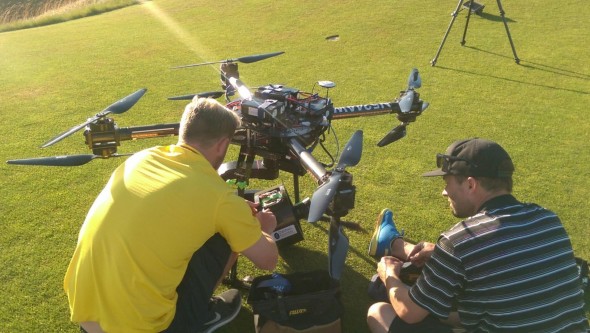 This drone, equipped with a TV camera, will hover offshore and along the edges of the Chambers Bay course delivering live shots over four days for the Fox TV telecast of the U.S. Open. / Fox Sports TV

UNIVERSITY PLACE — On the Saturday before the fabled NFC Championship showdown between the Seahawks and 49ers at the Clink, Fox Sports TV executives drove down from Seattle to University Place for a look-see at the course that would hold the network’s first major golf telecast.

A year earlier, they spent a reported $100 million in a 12-year exclusive-rights deal with the U.S. Golf Association, whose prize was the U.S. Open.

As the car entered the park grounds and began its descent from the top of the bluff, John Entz gasped at the panorama.

“Breathtaking,” he recalled Wednesday. “I would challenge anybody to walk away from this course and say it’s not one of the most unbelievable settings they’ve seen.

“What struck all of us was that it doesn’t look like 99.9 percent of the courses in America.”

The view, via Fox Sports, will be shared with America, and the rest of the globe that cares about golf, starting at 7 a.m. Thursday when a 20-year quest by Pierce County is realized — the transformation of an industrial scar into a community smile and a potential beacon of recreation, tourism and revenue.

Entz, president of production and executive producer for Fox Sports TV, sees the story as so compelling that he helped bring together more than 700 television workers to tell it over 38.5 hours of live broadcasting from a single venue.

“In terms of how much has to be set up and how much terrain has to be covered and the amount of people it takes,” he said, “this is way bigger than a Super Bowl, and that’s not hyperbole.”

In the words of veteran sportscaster Joe Buck, who has called four Super Bowls and 17 World Series, and will call the golf shots this week next to analyst Greg Norman, Fox “is all in like I’ve never seen.

“It’s a work of art. We’re going to have pictures unlike anything we’ve ever had on the network.”

In addition to original graphics that will better inform viewers about the course, strategy and statistics, the network has deployed 105 cameras — including one robot camera on Fox Island aimed at Mt. Rainier — 47 miles of fiber optic cable and 64,000 worker hours over a two-week period.

Fox is eager to show off the latest in camera-equipped drone technology: One by land and one by air.

The airborne drone will hover offshore near the beach around No. 16  — FAA regulations don’t permit an altitude of more than 200 feet, and its noise precludes over-course use —  and the ground drone will be aboard a four-wheeled mini-car, remotely controlled, that can follow golfers up the fairway, or drive past them and shoot back, or rotate its lens in all directions.

Gallery members, behave yourselves. Something will be watching back.

The technological wizardry will be ground-breaking, but Mike Davies, senior vice president of technical and field operations, is cautious about the gadget frenzy that skeptics think Fox won’t be able to resist.

“We want to try these things, but not at the expense of the game, of telling the story,” he said in the quiet hum of Fox’s state-of-the-art mobile production truck, bought new for $6 million in March and yet retains its new-car aroma. “We’re going to try to weave in some of our innovative items subtly.

“They’re tools to enhance the story, not technology for technology’s sake. We don’t want to be obnoxious about this.”

With so much air time, the temptation will be great to fill with tech-spectacle, but Entz was clear about the prime directive.

“The No. 1 thing we told each other was that the golf was the most important thing,” he said. “If we could bring in things that would help the viewer, that was the goal. We’ve tried to make clear internally that the game is the priority.”

The convergence of first-time status for the unique Chambers Bay layout as a major championship course with the first golf rodeo for Fox, has ratcheted up the sports and media intrigue for this Open. There’s a chance one or both could go off the rails, which only adds to the drama. If both succeed, the impact could be large for Fox, the sport and Pierce County, as well as the greater Puget Sound marketplace.

But for all the historic sparklies that are hanging from the 115th edition of the Open, the TV portion remains a ratings game. A cute little four-wheeled roving peeper has nowhere near the impact of Tiger Woods surviving the cut for the final two rounds.