Jimenez on Chambers: ‘For me, it’s too tough’

Swaggering Spaniard Miguel Angel Jimenez, complete with cigar, admitted Chambers Bay was too much for his 51-year-old body, but that is unlikely to prevent him from having a good time. 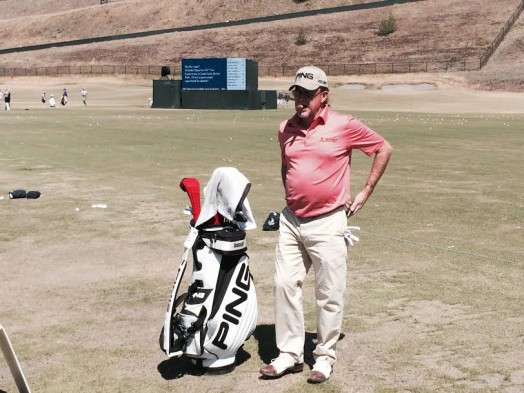 UNIVERSITY PLACE — The Most Interesting Man in the Golf World wasn’t interested in talking. At least, not after hitting balls and going through a television interview Wednesday at Chambers Bay in preparation for the U.S. Open.

“Not right now,” Miguel Angel Jimenez told a young reporter who walked up and asked for an interview as the 51-year-old headed toward the practice putting green.

Jimenez to that point lived up to his debonair reputation. He wore his trademark aviator sunglasses. He smoked his trademark cigar. His trademark ponytail peeked out from under his beige PING hat. With a healthy gut hanging over a bright red belt, he looked so nonchalant he could have been at a Saturday-morning scramble.

Jimenez took long pauses between practice shots to chat in Spanish before leaving the driving range in a brisk walk.

Before he departed, snippets of conversation from Jimenez with a television crew could be overheard. The native of Malaga, Spain, looked as if he were a rival agent of James Bond.

A European Tour regular who has never won on the PGA tour, Jimenez was asked about being one of the elder players in the event. Eleven in the field are 45 or older.

He was asked how Chambers Bay compared to the links tracks he played in Europe.

“This is tough conditions, very hard,” he said. “For me, I think it’s too tough.”

It was tough to tell if Jimenez was serious (is he ever?). He isn’t expected to do more than occasionally break into a samba this week at Chambers Bay. But that can be worth the price of a ticket. Jimenez will likely draw a healthy following when he tees off Thursday at 8:28 a.m. PT with Colin Montgomerie and Jim Furyk.

For a guy who leads a lavish lifestyle — he likes Ferraris, expensive red wine, skiing black-diamond slopes and has a bombshell blonde wife — Jimenez said he still feels he can compete with the best.

Ranked the No. 47 player in the world, he won European Tour events in 2012, ’13 and ’14. This year, he set the tour record with 10 career holes in one, the latest coming at the BMW PGA Championship at Wentworth, England. It was his third of the season.

Those worrying it will take another century-plus for the U.S. Open to return to the Pacific Northwest can relax a bit.

USGA executive director Mike Davis expressed optimism Wednesday when asked about the chances of bringing the tournament back to Chambers Bay.

“It would be fair to say that any time we’re bringing the national Open Championship somewhere, we’re never going in with an attitude of one-and-done,” he said. “We’re just not doing that.”

Davis said the site and the competition will be evaluated after the tournament. Mistakes with the setup are to be expected, he said, but they hope to keep them to a minimum. The USGA will also evaluate parking and traffic and how well they worked in conjunction with the county and state.

“We’re coming into this thinking we’re going to have a great Open and sure, we’d love to come back,” Davis said.

The USGA announced the purse of the U.S. Open is $10 million, same as The Masters, PGA Championship and The Players.

The total purse last year for the Open at Pinehurst No. 2 was $9 million.

In 2013, the USGA signed a 12-year multimedia deal with Fox Sports Network that began this year. According to pgatour.com, the value is about $100 million per year, more than double th  previous deal with NBC Sports, which began broadcasting the U.S. Open in 1995.

USGA president Tom O’Toole Jr. didn’t get into specifics when asked if the new deal accounted for the increased purse.

McCarthy drains a hole in one

Denny McCarthy, an amateur out of the University of Maryland, hit a hole-in-one on the ninth hole during his practice round Wednesday morning.

Using a five-iron on the par 3, which played 202 yards, McCarthy landed the ball about 10 feet short of the pin and it rolled in, drawing a thunderous standing ovation. The 22-year-old responded by tossing the ball into the gallery.

“The whole place went wild down there,” McCarthy said. “We went wild, too. It was pretty cool.”

22 year old Denny McCarthy with the shot of the day, a hole-in-one on the 9th! Crowd reaction at @ChambersBayGolf pic.twitter.com/gxP3JNZbs6