Tiger Woods’ disastrous 80, including a farcical trip to “Chambers Basement,” cast a shadow over an otherwise mostly splendid day of golf as the Northwest’s first U.S. Open was well-celebrated. 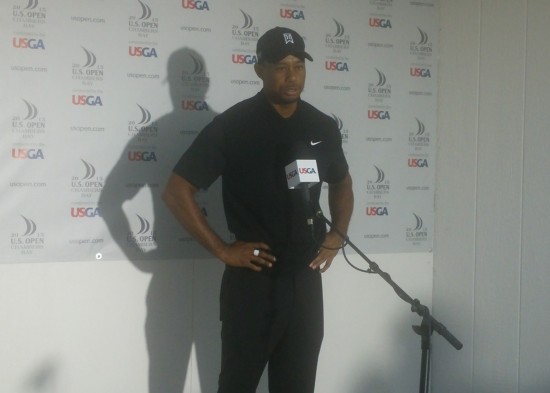 Tiger Woods was better at his media duties than his golf Thursday. / Art Thiel, Sportspress Northwest

UNIVERSITY PLACE — The first round of a major tournament is not about who is winning, but who is losing. Since the golf reaper comes after Friday’s second round,  Thursday for most is about scrambling to the back of the line behind the really bad players.

Such as Tiger Woods.

The spectacular career of one of America’s greatest sports figures found itself Thursday evening in the most ignominious place at Chambers Bay (aside from the water treatment plant next door) — the 11-foot-deep pothole bunker in the middle of the 18th fairway.

Known as Chambers Basement, the hazard was considered mostly a joke because it was so easily avoidable that no one took its threat seriously. It was just another deliberate extreme in a course full of them.

But there was Woods, the only one in the 156-man field to find the dungeon.

As he disappeared from view into the pit for what became a nice recovery shot, he could be seen smiling sardonically. On his way to an 80, laughter was his only refuge. He managed to hang onto it as he met the media after his nationally televised embarrassment.

“The bright side,” he said, smiling, “is at least I kicked Rickie Fowler’s butt.”

“Not very happy, that’s for sure,” Woods said, more seriously. “It was a tough day. Got off to a bad start. I stuck that 6-iron in the ground on the first hole, and then just couldn’t quite get it turned around today.

“It’s one of those things — just got to work through it. I’m trying as hard as I can to do it, and for some reason I just can’t get the consistency that I’d like to have out there.”

All due respect, he was consistent, and it isn’t one of those “things.” He was awful nearly all day and it was his third 80-plus score in his past 15 rounds. Woods has a broken game, recently and for most of the seven years since his infidelities tore apart his marriage.

Perhaps his game is fixable, as he desperately hopes. But right now he’s kidding himself.

Asked if he was convinced he was on the right path, he said, “Yeah, I am, I am. I know when I do it right, it’s so easy. It just feels easy to control, easy to do it, easy to hit all my shots. I just need to do it more often and build from there.”

But at 39, with age and injuries compromising his once-unsurpassed talent, he has become a cartoon that is hard to watch. In the high weeds on the eighth hole, his iron took a chunk of earth that forced the club from his hands and sent it high and backward, the ball lightly advancing.

The video of that shot may well serve as the most vivid demarcation of his descent.

Sad as it is to see greatness on fade, Woods is making it a little worse by attempting to blame circumstances for part of his demise. As he did in his Tuesday interview, he sideswiped at Chambers Bay, suggesting without saying so that the swift greens were unfairly picking on him.

The hardest part (of the day),” Woods said, “is trying to leave yourself below the hole and you can’t because the putts coming down the hills are just — they’re tough to make. Put it that way.”

Um, no. The greens were difficult, but 25 in the field broke par, led by the five-under-par 65s from Dustin Johnson and Sweden’s Henrick Stenson (complete leader board). In fact, except for an evening breeze from the southwest, conditions were utterly benign for the first Open in Northwest history — no precip, near-zero humidity, little direct sun. It was perfect.

Except for Woods, whose debacle cast a long shadow over a day otherwise celebrating golf and the success of a long civic quest for a national destination for Pierce County.

Fox Sports TV and many in the gallery could not look away from the wreck. His petulance over the course did not help.

Most of the golfers said they liked the course, but Sergio Garcia caused a stir with his tweets:

I think a championship of the caliber of @usopengolf deserves better quality green surfaces that we have this week but maybe I’m wrong!

If my problem is saying what everyone thinks but they don’t have the guts to say it, then I’m guilty of that for sure

The condition of the greens may irk other golfers as well. But no course, especially a public one, gets an A grade for beating nature. Jason Day, who shot 68, had perhaps the day’s best take on the course features that were unique for an Open, and for just about anywhere.

“There’s a lot of guys that have come into this day already frustrated at the course,” he said, “not only how long it can be and how tough it can be. But you can get some good breaks and bad breaks.”

That, of course, is the secret — work with the course, not against it.

Thursday, many seemed to believe, was the easiest day. The changes overnight to placement of flags and tee boxes will make things harder, perhaps along with a chance of showers. And the golfers will grow tired of the lumpiness of the grounds.

“It’s only going to get tougher and tougher as the week goes on and everyone knows that,” Day said. “It’s all about the attitude. You have to have a good attitude in U.S. Opens. It’s easy to play yourself out of the tournament real quick here.

After a relatively peaceful day, the game is about to get harder. But it will get a bit easier for viewers who will have only one more day to endure the decay of the modern game’s greatest figure.

Why Dustin Johnson has a good chance

“I really liked it,” he said of Chambers Bay.”The first time I played I thought it was great. I still like it. It’s definitely an interesting golf course.. And I really enjoyed it today, too. I like using my imagination on shots.

“It’s always fun to play courses that are different than what you play every day.”

One of the last golfers on the course, Ryan Moore of Puyallup, faded with the sun, posting double bogeys on 14 and 17 for a 75 that puts him in jeopardy of the cut Friday. The best local hope, Moore ranked 32nd in the world but posted the worst score among five golfers with area ties.

Michael Putnam of University Place, the first golfer to play an official round at Chambers Bay in 2007 and the first to tee off Thursday, had a par 70, one better than University of Washington star Cheng-Tsung Pan.

Troy Kelly, a Central Kitsap High School graduate and former UW player who now lives in Tacoma, had a 72.

“It was definitely nerve-wracking,” he said.  “It is tough to play in front of your home crowd. You don’t want to let anybody down. You want to play well, and show your talents out there a little bit,” he said. “Once I kind of settled in, then I got comfortable. It was just golf again.

“Obviously, we are on a big stage here.”

Richard Lee, another former UW player, had a 74 after returning from a nine-month layoff for thumb surgery.

Two-time PGA Tour winner Gary Woodland was hospitalized at Tacoma General after his round of 74, felled by dehydration and a virus. His agent reported he had been sick since Sunday. He has hope of playing Friday. . . .  The caddy for Stenson had his right hand in a cast after he was injured in a fall off the 16th green during a practice round Saturday.