Shorthanded as well as feeble, the Mariners get shut out for the fourth time in eight games after error opens the door for Giants. 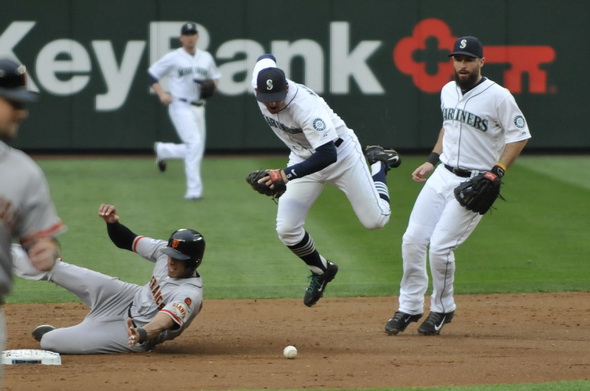 The Mariners were again on the wrong end of a shutout –  an all-too-familiar sight. The 7-0 loss to the Giants Thursday night at Safeco Field marked the fourth time in eight games that Seattle has failed to score a run.

The Mariners were on their way to getting out of the second inning with a double play, but SS Brad Miller dropped the ball while trying to make the relay through to allow the first run of the game to score and keep the frame alive. San Francisco had base hits on its next two at-bats while taking a 3-0 lead.

Rookie lefty Mike Montgomery allowed four runs in 19 innings over his first three major league starts, then he surrendered three in Thursday’s second inning. He settled down and had a decent night, but the Seattle bullpen really let him down. Tom Wilhelmsen is prone to funks, and he’s most certainly in one: three hits, three walks and four runs over his last two outings to raise his June ERA to 8.59.

An already anemic lineup didn’t get any better when the Mariners found out an hour before first pitch that 2B Robinson Cano (back stiffness) and 3B Kyle Seager (possible food poisoning) would not be available. But let’s be real: Runs are hard to find even when those guys are in the lineup. Seattle had a two-out hit in the first inning but needed 21 more plate appearance before getting another. The Mariners made Giants starter Ryan Vogelsong look like Madison Bumgarner – not many teams can do that.

“Looking back, I shouldn’t have played (Nelson) Cruz. He was throwing up right before the game too, and he toughed it out for us.” –Mariners manager Lloyd McClendon

Seager’s 192-game consecutive playing streak, the longest active streak in the American League, officially came to an end Thursday night . . . The Cano injury opened the door for LF Dustin Ackley to make his first start at second base since Sept. 21, 2013 . . . San Francisco’s Vogelsong was 0-3 with a 6.61 ERA in June before pitching 6.1 shutout innings Thursday night.

LHP Roenis Elias (3-4, 3.67 ERA) will get another shot at Houston Friday night after getting torched by the Astros over the weekend. Elias walked four, allowed seven hits and got smacked around for eight runs in a 13-0 loss Sunday afternoon. RHP Lance McCullers (3-1, 2.00 ERA) is scheduled to be on the mound for the Astros.