The 21-year-old Texan rose to the top of the U.S. Open at the halfway point, perhaps inspiring him to join in the growing critical commentary on the Chambers Bay course beneath his feet. 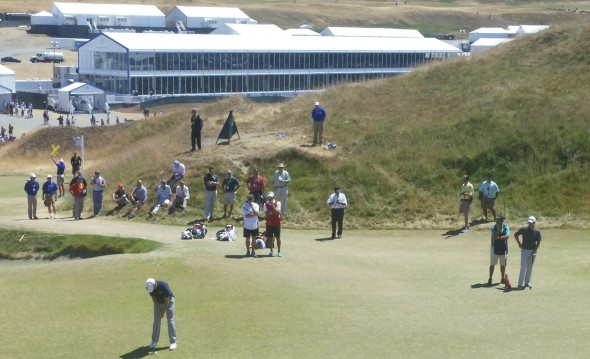 Jordan Spieth received a respite from the crowds at No. 6 green, where the terrain is so steep that no galleries are allowed, only officials and media. / Art Thiel, Sportspress Northwest

UNIVERSITY PLACE — Having won The Masters in April at 21, Jordan Spieth already established his bona fides as a contender for world’s best golfer. Now he is upping his pedigree by offering some course condemnation that’s become trendy among his elders.

He declared that No. 18 Friday was “the dumbest hole I’ve ever played in my life.”

True, it’s a short life. Yet he still shot 67, good enough to tie for the lead halfway through the U.S. Open at Chambers Bay (complete leader board), which flashed more teeth than Thursday. He joined a fellow Texan, Patrick Reed, at 135, but the five-under-par position was identical to the opening round, indicating the longest Open course in history (7,695 yards) and its sun-baked greens were taking a toll.

A Fox Sports TV microphone picked up Spieth’s scold, which on the golf course is public domain. But compared to the audible profanities of his more senior colleagues, notably Tiger Woods, Spieth’s choice of words is quaint. The man is going to have to add salt to his vocabulary.

“Whatever,” he said, dismissively. “If microphones are going to pick up, they’re going to pick it up. I’m not going to put a smile on and be happy with the way I played the hole. So I am who I am.”

Who he is, is the new face of golf. Spieth is succeeding Woods, who at 16 over is leaving Pierce County on his private jet back to Florida after another futile day in the weeds.

Woods was ranked No. 1 in the world as recently as 2013, but no one seems to remember that now. In the instant-gratification society, Spieth is fresh, implacable and relentless.

He’s had 11 top-10 finishes in his last 17 starts worldwide, which includes four wins. Should he prevail Sunday, he will become the first golfer to win the Masters and U.S. Open in the same year since Woods in 2002.

But that feat was not on his mind Friday after the 18th had been converted for the day from a manageable par-five to what he believed was an unmanageable four, part of the diabolical Chambers Bay plan to test the best. Spieth, apparently trying out his elevated status, felt free to offer an opinion.

“I think 18 as a par-4 doesn’t make much sense,” he said. “Of course, at the moment when I didn’t hit the right shots, it’s going to make less sense.

“I think the hole doesn’t make sense because you can hit it down the left center of the fairway and still end up in the right bunker in trouble.”

Course criticism seemed to be a theme as the greens received the most sun since the players arrived last weekend. Reed, 26, was unhappy.

“The last hole I felt like I hit two quality golf shots and had to play Mickey Mouse on the green because the pin was ridiculous,” he said. “If you had to putt defensive because you’re putting downhill the whole time, you just never know. It’s definitely a challenge, and hopefully it will smooth out a little for tomorrow.”

Henrik Stenson, the first-round co-leader at 65 who slipped to a 74 and a tie for 12th, was more aggravated.

“It’s pretty much like putting on broccoli,” he said. “It’s borderline laughable at some of the greens and some of the pin positions, when we’re actually almost better off plugged in a bunker than being on the top of a ridge.

“The way it’s playing when it gets really dried out, because it’s such massive undulations, it gets virtually impossible to get it anywhere close. If you don’t get it close, then you’re more or less going to three-putt.”

But with more sun in the forecast, the broccoli will continue to dry. In the absence of an alternate course, the players will have to suck it up, a tactic that seems to suit Spieth well. He persevered with a patience beyond his years.

“It’s definitely something I’ve improved on,” he said. “I don’t know if it’s my trademark, but it’s something that maybe a few years (ago) may have gotten to me a little bit more.

“But my patience and realization that this golf course is going to test your nerve and it’s how you rebound from it, certainly kicked in there.”

Spieth could certainly falter, from where any of the 16 players under par could make a two-day run at him. But he is intimidated by nothing, including any fear of speaking out. Plus he has two other assets that may prove crucial in the first links course in the world that is situated on a steep seashore slope.