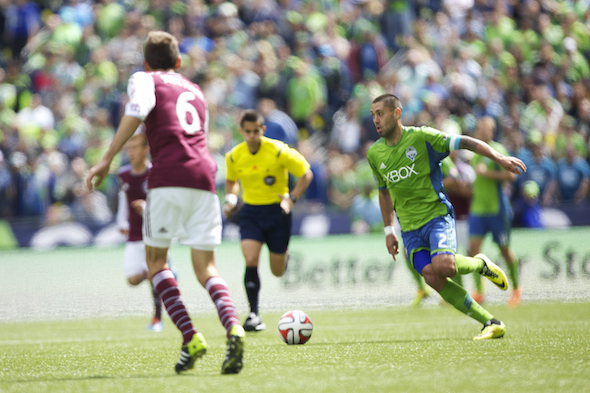 Major League Soccer Friday suspended Clint Dempsey for three matches and fined the U.S. Men’s National Team captain an undisclosed amount for his notebook-tearing rampage in Tuesday’s U.S. Open Cup contest against the Portland Timbers at Starfire Sports Complex. Dempsey, who could have been banished for three months or more for “referee assault,” according to league bylaws, will miss Sounders games against San Jose, Philadelphia and Portland.

The timing of the ban means that Dempsey will be eligible to play July 3 against D.C. United, and in time for next month’s Gold Cup competition.

The U.S. Open Cup Adjudication and Discipline Panel ceded to MLS earlier Friday the authority to punish the Seattle midfielder, who slapped referee Daniel Radford’s book out of his hands during a 3-1 Open Cup-ousting loss and then tore up the pages. Dempsey received a red card, one of three ejections of Sounders in the match.

“We do not tolerate conduct of this nature from any of our players,” MLS Deputy Commissioner Mark Abbott said in a statement. “No matter how passionate our players are or what happens in the ‘heat of the moment,’ they must always respect all aspects of the game, especially the referees. In light of Clint’s actions and our past precedents, we felt that a significant suspension was appropriate.

“While the incident took place outside MLS league play, alleged actions by an MLS player against a referee during any club competition is adjudicated and disciplined by the professional league. In this case, MLS had jurisdiction to review the incident and levy sanctions per policy.”

Dempsey could also face a ban from future U.S. Open Cup competitions. That will have to wait until 2016 since the Sounders have been eliminated from this year’s tournament.

Dempsey will not be available Saturday when the Sounders host the San Jose Earthquakes at CenturyLink Field (1 p.m. kickoff), or for matches Wednesday at Philadelphia or June 28 at Portland.

In addition to losing Dempsey, the Sounders will be without the services of leading scorer Obafemi Martins for three to six weeks due to a groin injury in the same game. Dempsey and Martins have combined for 14 of Seattle’s 23 goals this season.

Sounders owner Adrian Hanauer did not comment directly on Dempsey’s suspension, but earlier this week expressed dissatisfaction with members of the franchise in an open session with media.

“We’re an extremely proud organization. Right below our logo, there are three words that say passion, courage and community. We believe that we embody those three words and that everything we do is a positive reflection on them,” said Hanauer.

“Tuesday evening, the passion piece maybe went a little bit overboard and was maybe directed in the wrong ways. That goes for players, coaches, staff, fans.

“Now, we need to regroup. We’ve had lots of internal conversations. We will do whatever we need to collect information on fan misconduct and dole out appropriate punishments if those are necessary. We’ll deal with all of the rest internally.

“But I thought it was important to acknowledge that it wasn’t our proudest moment as the Sounders organization and we’re going to do better. We know that people are looking to the Sounders as the bellwether franchise in North America and we always need to be at the top of our game.”