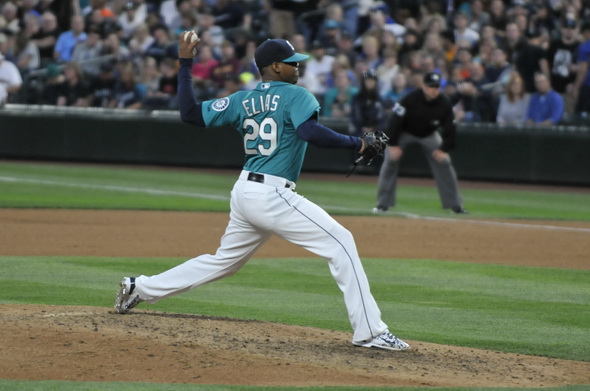 Roenis Elias had 10 strikeouts and no walks against the Astros. / Alan Chitlik

Robinson Cano (three for four, two runs scored) made a triumphant return and lefty starter Roenis Elias bounced back from a horrific outing in Houston to beat the Astros 5-2 Friday night at Safeco (box score). The five runs were the most the Mariners have scored in an Elias start.

The Mariners finally scored twice in the first inning despite going 0 for 4 with runners in scoring position. Go figure. That was enough on a night when Elias was so good.

Elias was much better than his last start, which also came against the Astros six days earlier. He allowed home runs on his first (to George Springer) and final (to Marwin Gonzalez, in the eighth) pitches but was almost unhittable between. Only four hits allowed over seven innings with 10 strikeouts and no walks. Fill-in closer Carson Smith continues to make Fernando Rodney seem like a bad dream.

With Cano and Kyle Seager back in the lineup, the Mariners chased Houston starter Lance McCullers in the fifth. Getting three RBIs from RF Mark Trumbo was a pleasant surprise after the former Diamondback had driven in just one run over his first 44 at-bats as a Mariner. Cano and Seager (an RBI single in the fifth after stranding five runners over the first three innings) were contributors after sitting out Thursday’s 7-0 loss.

“He’s a tough cookie. He came over on a boat; don’t think (the Astros) are going to intimidate him.”  Manager Lloyd McClendon on Roenis Elias facing a Houston team that shelled him for eight runs and seven hits  Sunday.

Cano (stiff back) and 3B Kyle Seager (flu-like symptoms) were back Friday after missing one game . . . Houston’s McCullers was facing Seattle for the second time in six days, having thrown five shutout innings in a 13-0 win over Seattle Sunday . . . Jose Altuve, Houston’s All-Star second baseman, was not in the lineup Friday because he’s been dealing with a sore hamstring.

Even when RHP Taijuan Walker was struggling, he always gave the Astros his best stuff. But Houston finally solved the 22-year-old starter the last time out, tagging Walker for nine hits and eight runs in three innings. Walker (4-6, 5.00 ERA) has found his rhythm since that May 2 start and hopes to have better success Saturday, when he’ll face Houston and ace LHP Dallas Keuchel (8-2, 2.04 ERA).