In an interview-turned-rant, legendary golfer Gary Player Saturday basically ripped Chambers bay for its length and its slick greens that are a detriment to amateur as well as pro golfers. 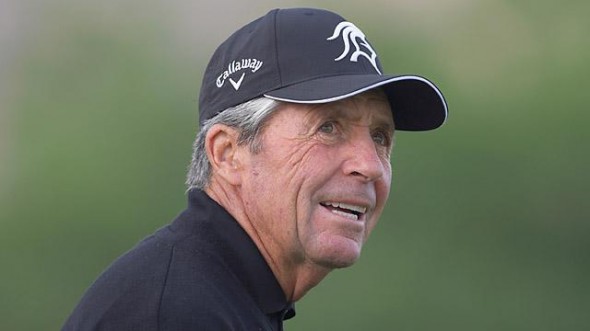 Golf legend Gary Player fired an oral torpedo at Chambers Bay Saturday, calling the site of the U.S. Open an embarrassment and a tragedy during an interview on Golf Channel’s Morning Drive show. Here’s the transcript of his rant, via Golf Digest, prompted by the question, “Good morning, Mr. Player, how are you?”

“I’m standing in the most beautiful state in the world, Washington, Seattle, unbelievably beautiful, and we play this U.S. Open, this great championship, a group of people, the USGA that I have great respect for, but this has been the most unpleasant golf tournament I’ve seen in my life.

“I mean, the man who designed this golf course (Robert Trent Jones Jr.) had to have had one leg shorter than the other. It’s hard to believe you see a (golfer) miss the green by one yard and the ball ends up 50 yards down in the rough.

“Imagine, this is a public golf course. This is where we try to encourage people to come out and play and get more people to play the game . . . It’s actually a tragedy. It’s 7,900 yards long. The world is suffering from a shortage of water. Can you imagine the water this course will take?

“An average golfer playing this golf course, I’m telling you, if he’s a 15, 16-handicap, he’s going to shoot 110 and he’s not going to go home a very happy man. We’ve got to make golf where it’s quicker, where it’s more enjoyable, get back to their family. We don’t want a husband and wife to argue because he’s taking too long and neglecting his family life.

“We’re going about it in the wrong way. The golf balls, and this is happening, why they’re building these crazy golf courses is because it’s in defense of the ball going too far. We’ve got to cut the ball back for the pro golfer, leave it for the amateur golfer. We’re making golf courses longer and longer.

More expenses, more water, more fertilizer, more labor. They’re taking a beautiful golf course, making undulating greens, bunkers in front of the greens, and the folks are resigning from golf in numbers as far as amateurs are concerned  . . . We don’t want to see that. We love the game. We’ve got to promote it in the right way.

“Professional golf has never been so healthy. But we’re in trouble amateur-wise.”

Complaints about limited viewing and poor proximity to golfers prompted the USGA to explain the restrictions Friday afternoon.

“This is not about limiting views,” Danny Sink, championship coordinator, told reporters an an impromptu briefing. “It’s about protecting the spectators.”

After a rash of injuries to spectators from slips and falls at the layout’s first big event, the 2010 U.S. Amateur, gallery sizes were tightened to keep ticketholders off the most coveted spots — dune tops and ridges. But the slickness of the fescue grasses and looseness of the sand make climbs hazardous. The USGA was considering some expansion for the weekend.

“We’ll do it if we can, but we just want people to be safe,” Sink said.

Because of the steep mounds, spectators can’t walk along each fairway to follow their favorites. The effect was noticeable by the golfers, including Phil Mickelson, whose wife, Amy, has been a fixture for years in his galleries.

“Yes, it’s weird,” he said earlier in the week.  “Amy wants to come out and follow and she simply can’t, she just can’t come out and, first of all, see.

“And I’ll tell you, the golf spectators are probably the most dedicated fan, when you think about it. Any other sport you buy a ticket, you sit in a seat and you watch a hundred percent of the action. In golf you buy a ticket, you’ve got to walk miles in rough territory and you see but a fraction of the event. So I give a lot of credit to the people who are out here.”

The USGA tried to compensate with grandstands that can accommodate 18,000, including 6,000 around the 18th green. But 31,000 daily tickets have been issued.

“We’ve been conservative,” Sink said. “We’ve been making sure people are not going into places where they’re going to fall down and get hurt.”

The University of Washington’s Cheng-Tsung Pan faltered Saturday with a six-over 76 that left him at 219, two strokes back of his fellow former Husky, Troy Kelly, who had a 73 Saturday . . . The field was cut at 145 Friday night. There are 75 players in the field for the final two rounds. Amateur Nick Hardy bogeyed his last hole to finish at 5-over 145, allowing 15 additional players to play the weekend, including Kelly . . .  Spieth’s second-round 67 is his sixth consecutive round under par in major championships. Spieth’s cumulative score (23 under) is the best through six major rounds in a season in the modern era. The previous best was Ben Hogan (19 under) in 1953 . . . Both Spieth and Patrick Reed competed in the 2010 U.S. Amateur at Chambers Bay. Reed advanced to the round of 32 and Spieth failed to qualify for match play.