A four-way tie for the lead entering Sunday’s final round promises drama, but the criticisms of the course come largely from golf’s stodgy culture of stubbornness when it comes to change. 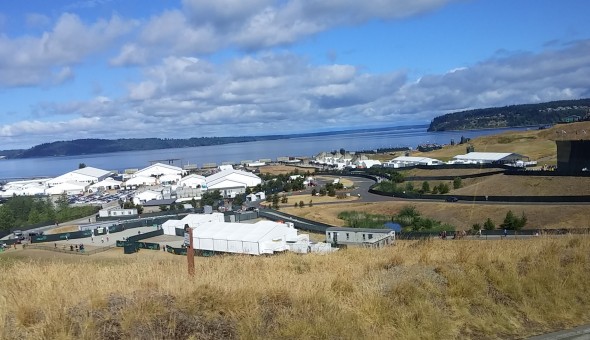 For its critics, Chambers Bay is taking a lot of rookie hazing. / Art Thiel, Sportspress Northwest

UNIVERSITY PLACE — Going into the U.S. Open, the freshness/oddness/hardness/upness of Chambers Bay was going to be the story of America’s national golf championship. Through three rounds, nothing has changed.

But the lamentations from the golfers, past and present, and the national media is getting a tad wearying. Now they are opening up restaurant menus to find comparables to the greens.

Told that Henrik Stenson said the greens were like putting on broccoli, Rory McIlroy, the world’s No. 1, who shot par 70 Saturday, playfully said, “I don’t think they’re as green as broccoli. I think they’re more like cauliflower.”

Somehow Dustin Johnson, Jordan Spieth, Branden Grace and especially Jason Day made it through the salad bar Saturday that set them up as the final four, all tied at four-under 206, for Sunday’s potentially chaotic conclusion to the first U.S. Open in the Northwest.

Another gang of four were all one-under — the only eight golfers under par from the original field of 156, which began Thursday with  25 under par. It would appear that Chambers Bay has heard the unpleasant commentary, and is fighting back.

However, Day, for a day anyway, appeared indomitable. After collapsing on the course Friday from an episode of vertigo, Saturday a weakened Day rallied with birdies on three of the final four holes to finish with a 68 on the warmest day of the tourney.

“I didn’t feel that great coming out early and then felt like — I felt pretty groggy on the front nine just from the drugs that I had in my system, then kind of flushed that out on the back nine,” said Day, a 27-year-old Australian ranked 10th in the world. “But then it kind of came back. The vertigo came back a little bit on the 13th tee box, and then felt nauseous all day. I started shaking on 16 tee box and then just tried to get it in, really. Just wanted to get it in.”

The gallant effort offered a poignant counterpoint to the litany of churlishness regarding Chambers Bay, particularly from the older crowd of Phil Mickelson, Tiger Woods and others, including Gary Player, one of the game’s greats, who opened his yap unprovoked Saturday to call the choice of Chambers Bay a “tragedy.”

The fact that Johnson is 30, Day and Grace are 27 and Spieth is 21 is coincidence, but coupled with the fact that six young amateurs made the Open cut, most since 1966, it suggests that there are a certain group of people coping with change better than others.

Calling a style of golf course a “tragedy” is an embarrassing misuse of a word meant for serious stuff, but is typical of the insular sanctuary of golf that is desperate for a little perspective from other than the first world.

Further, the complaint of Player, 79, about the giant course’s use of water is just ignorant. The wastewater treatment plant next door supplies gray water for most of the needs of the course, which has won national awards for its enlightened use of recycled materials.

Making light of the conditions of Torture Chambers is fine. Making a case against it is largely a resistance to change for a sport that tends to be full of itself, its traditions, customs and stubbornness.

The U.S. Golf Association, well aware of the sport’s historic stodginess, took a chance in 2008 when it hired year-old Chambers Bay to host its 2015 national championship, largely for its location, TV optics and novelty but with a purpose of spreading the worth of the game.

The sprawling course is almost entirely hand-made to create a unique, not perfect, challenge in the style of seaside tracks in the UK. But perfection is what many of the PGA tourists expect, including McElroy.

“The course itself is great,” he said. “I think the condition of the greens — I guess it’s the same for everyone, but to come to a U.S. Open and not have perfect greens is a little disappointing.

“At the same time, it is what it is and you have to deal with it.”

Without going all agronomy here, a prime issue is how two kinds of grasses cohabiting the greens handle moisture. The fabled fine fescue native to the Northwest tends to lay down, and the invasive poa annua grass tends to swell. The mixture of the differences accounts for much of the bumpiness that makes for the grumpiness.

So deal, fellas. This isn’t Sardi’s in Manhattan where the waiter will take back the steak to fix its preparation.

Beyond the issue of the greens is the overall originality of the place. As golf’s ultimate globetrotter, Fox Sports TV analyst Greg Norman played Chambers in April, after which he said, “There’s nothing like it in the world.” That should be taken as a sign of progress, not fear.

At 45, Jim Furyk is one of the older guys on PGA Tour, but he seems to have the ability rare among his contemporaries to adapt to the changed circumstances of a links-style course in the U.S. for a major.

“At first look, the golf course, it definitely blows your mind,” he said after rounds of 71-73-73. “You look at it, and it takes you out. You start trying to think of all the variables. Once you play it two or three times, you can kind of bring everything back in and realize the small areas that you are trying to hit the ball to.

“Some players that came here early and played a round and said, ‘Wow, it’s going to be difficult to get to know.’ I think a lot of that is overblown.”

So true. The strangeness of the former gravel quarry can be smothering if golfers let it. But the pro tour crowd is not the best judge of Chambers Bay’s qualifications to host a major. They live in a highly pressurized but well-managed world where course marshals hold up semaphores that demand public silence as the players go to work.

Please let me be among the first to offer the same signal to the complainers.