Rory McIlroy thrilled the Chambers Bay crowds with a run of four birdies over six holes in the final round Sunday, but ranout of steam over the final holes. 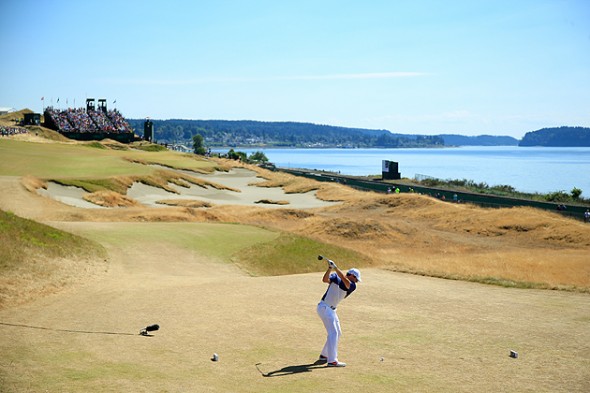 Rory McIlroy, on the 16th hole, shot s final-round 66 that looked like he might be on to something big. / Michael Cohen, USGA

UNIVERSITY PLACE — Hours before Dustin Johnson’s unthinkable three-putt that lost him the U.S. Open Sunday, there was Rory McIlroy, who began the day eight shots out of the lead, draining a 70-foot birdie on the par 4 13th hole to move to -6.

It moved McIlroy to -2 for the tournament, with the par-4 16th and par-5 18th remaining. Both were easy birdie and possible eagle holes that could have sent the No. 1 player in the world to a final-round 62, which would have marked the best score in major championship history.

But McIlroy faltered down the stretch. He bogeyed the famous par-3 15th, hit a poor chip on 16 that led to a par and three-putted the par-3 17th to bogey and fall back to even.

McIlroy still shot a 4-under 66. But he couldn’t help but lament his final five holes, which he played 2 over Sunday and 6 over for the tournament.

“When I look back, obviously the last few holes of this golf course haven’t been kind to me all week,” said McIlroy, a Northern Ireland native. “And when I look back at this tournament, that’s where I’ll rue some missed opportunities. I feel like it’s sort of one that got away, especially the way I putted this week. I don’t think I’ve ever hit the ball as well in a major championship.”

McIlroy needed a 61 to tie Spieth. A 60 would have been the biggest comeback in U.S. Open history, surpassing Arnold Palmer’s win in 1960 when he came from seven back on the final day. It wasn’t out of the question, given how well he felt he was hitting the ball.

“It bodes well for the rest of the summer the way I’ve hit the ball this week. And I’ve got a couple of weeks to work on my putting and get that up to the shape that it has been in and especially the way it was last year. If I can do that, keep the long game where it is, I’m really excited about what can happen over the summer.”

Australian Adam Scott fired a six-under 64 — the low round of the week — to finish the tournament at -3. Scott ended two strokes back of Spieth after beginning the day seven off the lead.

“I feel like I had nothing to lose today and everything to gain,” Scott said. “And I knew I was playing well and I just couldn’t quite put it all together the first three days. I really wanted to today. It was a big effort for me today. To be honest, it’s the kind of round I needed to get things going for me this year, hopefully.”

“I played really well and I took advantage of some of the holes playing a bit shorter and didn’t have any disasters out there and hit a few good shots and took advantage of them. It’s kind of what I needed to even think about having a chance.”

Former University of Washington golfer Troy Kelly closed with 1-under 69 to finish at  286, a fine showing for a guy who didn’t know two weeks ago whether he would qualify.

“It was really special,” he said. “That’s the biggest grandstand (6,000) I’ve ever seen, I think, besides maybe playing over in the British Open . . . To see all those people and having people yell my name, ‘Hey, TK!’ and stuff like that. Every hole it was going on. I’m out on the road I don’t get that support.

“A lot of people probably don’t even know who I am when I’m out there but this week they did. And it was sure a lot of fun.”

A graduate of Central Kitsap High, Kelly, 36, had the best showing of the five members of the field with local ties.

“The whole experience was amazing,” he said. “It was an honor to play in front of everybody and have everybody come out and support me. Overall it was a great week. Obviously the last two days have been fun for me, because I didn’t even know if I was going to be able to play.”

After shooting a 77 Sunday to finish 11 over, the outspoken Poulter echoed the sentiment of Billy Horschel, expressing frustration with the green conditions on his Instagram account. The European tweeted earlier this year that he heard the course was a “complete farce.”

I look forward to congratulating the 2015 US Open champion very soon, I simply didn’t play well enough to be remotely close. This is not sour grapes or moaning or any of that crap. It simply the truth. Mike Davis the head of the USGA unfortunately hasn’t spoke the truth about the conditions of the greens. I feel very sorry for the hundreds of greens staff who spent countless hours leading into this week and this week doing there best to have it the best they could and I thank them for that. But look at the picture. This was the surface we had to putt on.

It is disgraceful that the USGA hasn’t apologized about the greens they simply have said. “we are thrilled the course condition this week”. It wasn’t a bad golf course, In fact it played well and was playable. What wasn’t playable were the green surfaces. If this was a regular PGA tour event lots of players would have withdrawn and gone home, but players won’t do that for a major. They were simply the worst most disgraceful surface I have ever seen on any tour in all the years I have played. The U.S. Open deserves better than that. And the extra money that they have early this year from Fox Sports, they could easily have relayed the greens so we could have had perfect surfaces. Simply not good enough and deeply disappointing for a tournament of this magnitude.

I don’t like it when people lie on camera to try and save face. And to all you fans that paid good money to try and watch us play golf but couldn’t see anything on most holes because it wasn’t possible to stand on huge slopes or see around stands, I apologize and I’m sorry you wasted your money traveling to be disappointed. I hope we all learn something moving forward to not have these problems in the future. Happy Fathers Day.