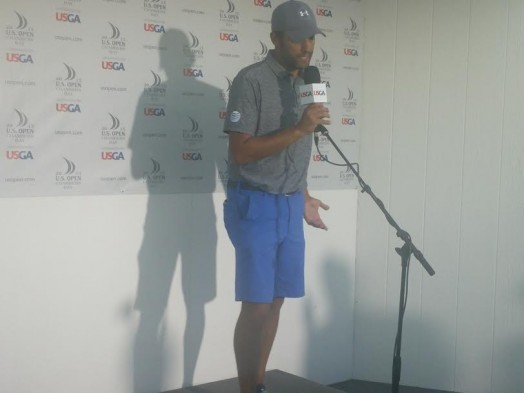 UNIVERSITY PLACE — A caddie rarely holds his own press conference after a major golf tournament, but when Michael Greller addressed the media following Jordan Spieth’s U.S. Open win Sunday night outside the Chambers Bay media tent, it was a no-brainer.

Greller is Spieth’s caddie and confidante, a former school teacher from University Place that’s helped Spieth rise to stardom after first caddying for the 21-year-old at the 2011 U.S. Junior Amateur at Gold Mountain in Bremerton.

Spieth heaped praise upon Greller after he became the first player since Bobby Jones in 1926 to win the U.S. Open by a single stroke with a birdie on the 72nd hole.

“That was probably the best work Michael has ever done this week to get me through,” Spieth said. “At Augusta  (in April for the Masters), I was on and making everything and striking the ball fantastic. He was the one that got me through this week when I wanted to get down when things weren’t going well.”

A prime example was when Spieth pushed his 6-iron on the par-3 17th hole, leading to a double bogey that nearly derailed his chances. While the ball was airborne, Spieth said he thought he had hit it out of bounds. It became a double bogey and shriveled his lead by two strokes.

Unfazed, Spieth birdied the par-5 18th hole with a well-positioned drive before finding the green with a 3-wood on his approach. Spieth two-putted to finish at 69 and 5-under-par (275) for the tournament.

It capped a wild back nine, which included his playing partner, Branden Grace of South Africa, falling out of contention after he double-bogeyed the par-4 16th after hitting his drive nearly to the rail tracks than ran between course and Puget Sound.

On the same hole, Spieth nailed a looping birdie putt from about 26 feet, then fist pumped and let out a primal yell.

“I wasn’t calm and collected. Michael is the one who just shoved positive thoughts into my head the whole week,” Spieth said. “We didn’t have our best stuff tee to green. I putted the ball well, played the ball well inside 10 feet this week, which is where I struggled with the last couple of tournaments. Certain times I was getting frustrated out there, that maybe it could only be seen between me and Michael.”

Greller, a former caddy at Chambers Bay, downplayed his influence over Spieth. The young Texan showed remarkable poise throughout a tournament that featured wild swings and one of the most dramatic finishes at a major championship in recent memor,y when Dustin Johnson three-putted from about 12 feet away on 18 to lose by one stroke.

“As far as my local knowledge, it really wasn’t worth anything, I didn’t think, because Jordan’s Jordan,” Greller said. “He’s one of the best players in the world, and I was just trying to stay out of his way. I’ve worked hard the last couple of weeks, but I haven’t been out here in five years.”

Still, Greller and Spieth were fan favorites from the moment they arrived in University Place. When Spieth received the U.S. Open trophy, Greller’s name drew a resounding ovation from the stadium-like bleachers surrounding the 18th green.

Greller had his wedding at Chambers Bay two years ago. His knowledge of the gravel-mine -turned-links layout was a big help, while many newcomers grew frustrated.

“The course has changed. The guys that I’ve caddied for usually can’t break 90, or it’s myself playing and I can’t break 80,” Greller said, deflecting attention. “I’m sure he’s being nice, but it comes down to Jordan just being one of the best players in the world.”

Sure, but it helps to have a great caddy.

“He could have let all the surrounding noise get to him,” Spieth said. “And so he deserves to be doing interviews. The only problem is I wonder if he’s going to give everything away that I said to him and embarrass me. But I think I’ll be all right.”